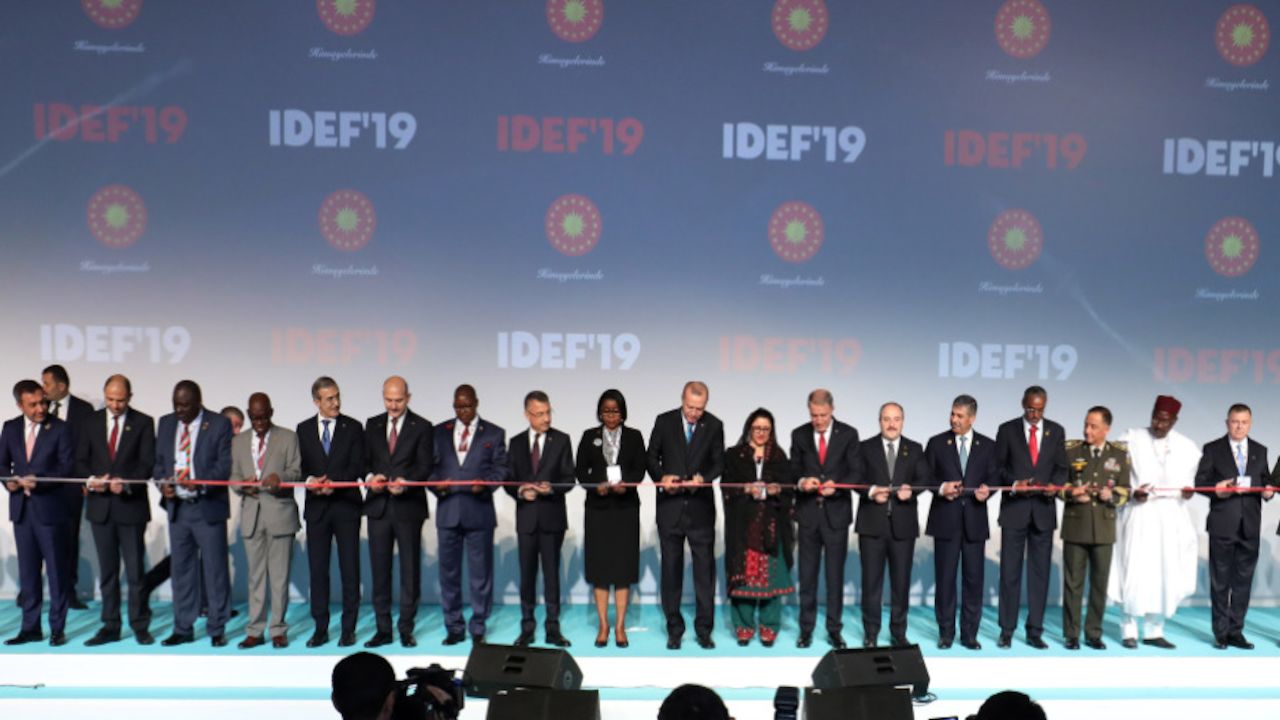 Under the aegis of the Turkish Presidency, the 15th International Defense Industry Fair IDEF 2021 will be hosted by Turkey’s Ministry of National Defense, under the management and responsibility of the Turkish Armed Forces Foundation and organized by Tüyap Fairs Group between May 25-28, 2021.

Preparations are continuing at full speed for IDEF to be carried out in the best possible manner. Works continue at the fair center, the relevant institutions and the participating companies.

Works started on the fairground

105 delegations from 63 countries will participate in IDEF 2021

IDEF welcomes the authorities responsible for their countries’ defense and provides a platform for international cooperation. This year, based on the principles of reciprocity, it has been confirmed that 105 delegations from 63 countries will participate, in response to the invitations made by Turkey's Ministry of National Defense, Ministry of Interior, its subsidiaries and the Presidency of Defense Industries.

While 24 Ministers declared that they will participate in IDEF 21, 7 Chiefs of General Staff and Deputy Chiefs of Staff, 20 Force Commanders, 5 General Directors of Public Security and senior officials at Undersecretary level have confirmed their presence in the fair as well.

This year, the increasing interest of senior officials responsible for the defense procurement of their countries already makes it clear that IDEF'21 will be highly efficient and reach its goals. Appointed meetings are planned between delegations, participants from abroad and the authorities responsible for Turkish defense industry procurement.

IDEF is preparing to host local and foreign participants and visitors

IDEF has seen an increasing number of participants every year. Previous participants will take part in the fair this year same as before, and  new participants are continuing to find their places. With only month left until the fair, sales are near completion.

This year, unlike the previous fair, the 4th hall is put into service to exhibit the products of participating companies, in line with the increasing participation demands. The B2B meeting rooms, the construction of which has been completed, are located in the first hall as its spacious area makes it better for holding large meetings. The procurement authorities will hold meetings with the participants and foreign delegations in the rooms found on the fairground.

Face-to-face meetings are planned to be held in line with COVID-19 measures with all the precautions taken in accordance with the procedures and principles. Participants started making requests for meetings both with delegations and procurement authorities. The panels for IDEF 21 have already been planned where some important names in the industry will be participating as speakers and will be discussing the latest and most important developments in the defense industry field. These panels that will take place on the 2nd-3rd-4th days of the fair will be broadcasted live by IDEF TV.

Cooperation agreements and contract signing ceremonies, one of the most important aspects of IDEF, are being planned as well. MİLGEM will also be promoted to foreign delegations in line with the activities of Turkish ports, given its importance in demonstrating the progress of Turkish  naval industries.

Tüyap Fairs Group, the organizer of IDEF, became the first and only fair organizing company to receive the TSE COVID-19 Safe Service Certificate.

A series of measures are taken on the fairground in accordance with the regulations issued by the Turkish Ministry of Health and the Turkish Ministry of Trade, which are being implemented under the supervision and control of Turkey’s Federation of Chambers and Commodity Exchange and its authorized rooms in the provinces. In this context, everyone’s HES codes and temperature will be checked before they enter the fairground.

With the entrance system to be prepared in pursuant of the social distancing rules and the two large check points, IDEF'21 will offered a safe fair experience to all participants and visitors with the maximum control level of every visitor who wants to enter the fairground.

Only defense industry professionals will be accepted as visitors to the fair given the restrictions on the number of people who can be present on the fairground at the same time. As in the previous editions of the IDEF fairs, the first day will be closed to visitors as it is assigned as a protocol day. Visitors will only be able to visit the fair on the day they choose during the submission of their preliminary visit requests. This also applies in a similar fashion to all participants, where participants who will be allowed to attend the fair have to make an appointment one day in advance.

Denseness controls will be carried out continuously on the fairground and entrances, where the number of the visitors who will be allowed to enter will be adjusted accordingly. Based on this, a waiting area of 2,900 square meters has been prepared for guests with the prediction that visitors may have to wait before entering.

As in 2019, the fair will be physically held in the Tüyap Fair and Congress Center with the use of all of its halls, which take up a space of 121,500 square meters.