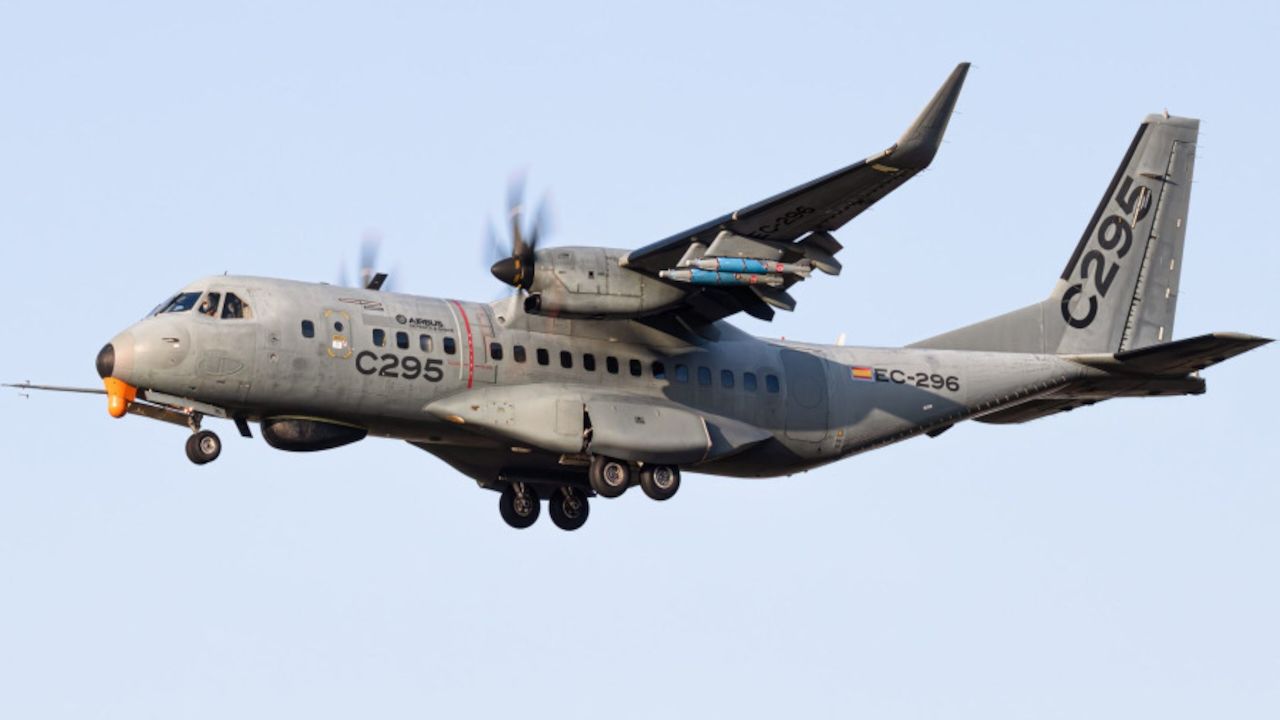 An Airbus C295 aircraft has been seen carrying no fewer than four Turkish-made precision-guided bombs, a highly unusual load for a tactical military transport of this kind. The European company appears to be stepping up work on its armed C295 version, with these latest trials suggesting that there is serious interest from potential customers, if not already firm orders.

The images in question, taken today by Spanish photographer Santi Blánquez, show an Airbus-owned test aircraft, with the temporary military registration EC-296, carrying four 500-pound-series bombs fitted with the Turkish Roketsan Teber guidance kit that adds laser and INS/GPS guidance modes and essentially turns the airlifter into a strike aircraft. The aircraft was on a test sortie from the Airbus facility in Seville, Spain.

Airbus debuted its armed version of the C295 twin-turboprop at the Dubai Airshow in November 2017, pitching it as a strike version of its popular transport, over 180 of which have been delivered to air arms around the world.

The armed C295 — also offered for intelligence, surveillance, and reconnaissance (ISR) missions — was reportedly developed by Airbus in response to interest from potential customers in the Middle East and North Africa. In particular, Airbus officials noted that while propeller-driven light attack aircraft were becoming increasingly popular in the region, come customers considered that these lacked endurance as well as ISR sensors.

The variant is based around the company’s own Fully Integrated Tactical System (FITS), a mission system that integrates different sensors and weapons and has been installed in dozens of aircraft already.

There are two basic versions of the armed C295 offered. The first features a lighter weapons fit, while the second is more heavily weaponized. Both incorporate electro-optical sensors in a turret below the nose, and a surveillance radar below the fuselage, which can be seen in the aircraft under test. Other equipment includes communications and self-protection suites.

The light version uses a roll-on/roll-off FITS and has a pair of manually aimed .50-caliber machine guns firing from the fuselage doors. Since both FITS and machine guns can be removed fairly rapidly, the aircraft can also be used for basic transport missions. The machine gun has already been tested and declared ready for delivery.

The “heavy” version uses a fixed FITS installation and has four underwing hardpoints — as seen on EC-296.

When the aircraft was unveiled, Airbus had already teamed up with Roketsan, with the Turkish firm to provide the guided weapons. As well as the 500-pound-class Teber guided bombs seen above, options include up to 16 L-UMTAS lightweight laser-guided air-to-ground missiles or pods for 2.75-inch Cirit laser-guided rockets. Another option is the Spanish-made Expal CAT-70 unguided rocket, carried in pods provided by the Brazilian company Equipaer. Meanwhile, adding precision-guided munitions to a transport-derived gunship is something that is happening increasingly in the United States too, in both the Air Force and Marine Corps.

To turn the C295 into a genuine mini-gunship, a 27mm Mauser BK27 automatic cannon — as used in the Eurofighter Typhoon, among others — can be added in the port side of the fuselage, combined with a second electro-optical turret mounted on the fuselage side for target acquisition and aiming. This weapon is said to have an effective range of 2.5 miles. Intriguingly, the photographer suggests that the paratroop door on the port side of the fuselage of EC-296 seems to have a hatch for an automatic gun.

The use of non-American armament was a deliberate decision, avoiding the possible restrictions imposed by the U.S. International Traffic in Arms Regulations (ITAR) guidelines, which can limit the transfer of defense and military technologies and services.

“We heard from potential] customers that they want some of these weapons and were interested in working with two of the providers, which makes it easier for us,” Miguel Morales, head of airborne ISR marketing at Airbus told AirForces Monthly magazine back in 2017.

At the same time, Morales also said that the .50-caliber gun installation was soon to be delivered to an undisclosed customer in the Middle East. There is no confirmation whether or not that has happened, although the Security & Defense Arabia website suggested in 2017 that examples had already been delivered to an unidentified customer, armed with two .50-caliber guns and mounts, supplied by Nobles Worldwide and U.S. Ordnance.

In the past, the United Arab Emirates (UAE) has been suggested as a potential customer for the armed C295 and a $250-million contract for five C295s was announced at the 2017 Dubai Airshow. So far, there has been no evidence these aircraft were provided in an armed configuration, but at least one has been seen with a sensor turret under the nose and it is noteworthy that the UAE is already a customer of both the L-UMTAS missile and the Cirit laser-guided rocket. These have been integrated on the country’s IOMAX Archangel and AT-802U light attack aircraft.

There was also a separate C295 gunship project, pursued by the then Orbital ATK and Jordan’s King Abdullah II Design and Development Bureau (KADDB). In contrast to the Airbus offering, this would have used U.S.-supplied AGM-114 Hellfire missiles and the BAE Systems Advanced Precision Kill Weapon System (APKWS) laser-guided rockets. However, interest seemed to fade, after which the Royal Jordanian Air Force offered its previous AC235 gunships and its C295 transports for sale.

Having Airbus as the systems integrator would seem to provide potential customers with an additional degree of confidence in that the original equipment manufacturer is able to certify the complete package of aircraft and subsystems.

In late 2017, Airbus said it expected flight tests to begin in October the following year. The company also said that the program has been slowed down by the need to wait for the test aircraft to become available. The same airframe was previously used to prove out the CC-295 configuration for the Canadian Fixed-Wing Search and Rescue (FWSAR) program.

This armed C295 is clearly a capable platform, with plenty of potential for light strike and ISR missions in less-contested environments, and is genuinely capable of executing multiple mission types in a single sortie. Its major advantages include the ability to fly missions of up to 10 hours (depending on weapons load and crew numbers) and the potential to integrate a variety of different armaments and sensors. What is more, in roll-on/roll-off configuration it can be rapidly adapted for more conventional transport and paratrooper missions, too. For an air force seeking a close air support and/or special operations support aircraft for counterinsurgency-type operations, the C295 could be ideal.

These latest tests suggest we may well see this new gunship entering frontline service in the near future. Although for now, at least, its final destination remains a mystery.