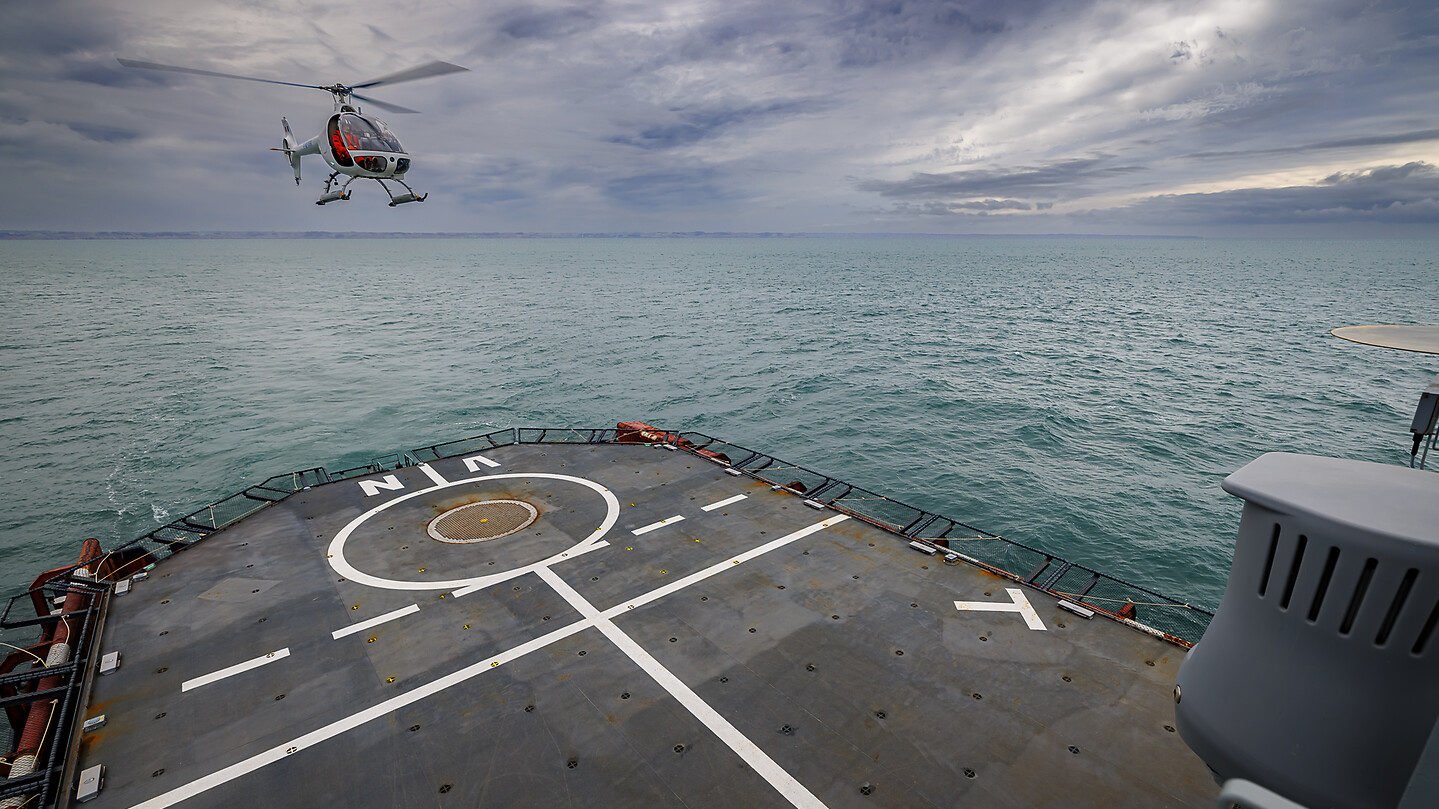 Airbus Helicopters has begun trialing autonomous take-off and landing capabilities at sea for the VSR700, an unmanned aerial system (UAS) being developed in the frame of the SDAM (Système de drone aérien de la Marine) programme, conducted by the DGA (Direction générale de l’Armement - the French Armament General Directorate) for the French Navy.

Trials were conducted using an optionally piloted vehicle (OPV) based on a modified Guimbal Cabri G2 equipped with the autonomous take-off and landing (ATOL) system developed for the VSR700. This flight test campaign paves the way for the upcoming demonstration of the VSR700, at sea, onboard a French Navy frigate.

“These tests in real-life conditions constitute a crucial step towards the campaign that we will conduct at sea with the DGA and the French Navy later this year,” explained Nicolas Delmas, head of the VSR700 programme for Airbus Helicopters. “Using the OPV, we have demonstrated the unique autonomous take-off and landing capabilities of the VSR700. We have also proved the optimal functioning of the vehicle and its command station interface on board a vessel in realistic conditions.”

The test campaign was conducted off the coast of Brest, France, onboard a civilian vessel equipped with a helicopter landing deck in the presence of experts from the DGA. Beyond demonstrating the ATOL system developed for the VSR700, the trials were also used to assess the approach procedures before landing on the vessel. The VSR700 flight envelope at sea, in proximity to a vessel, was tested in line with development objectives and was confirmed to be fully compatible with naval operations. Both the semi-autonomous and the fully autonomous modes of the ATOL system were demonstrated with success in different sea states. The VSR700 uses Airbus DeckFinder to enable autonomous ship deck take off and landings in all weather conditions, during the day or night. In total, 150 autonomous launches and recoveries took place. The handling and maneuvering of the OPV, representative of the VSR700, on the ship deck were also tested.

The OPV can carry one test pilot in order to enable safer and more agile initial testing before those systems are integrated into the fully autonomous VSR700. The OPV initially conducted piloted take-offs and landings before switching progressively to fully autonomous maneuvers.

Designed to operate alongside other shipborne naval assets, the VSR700 is a UAS in the 500-1,000 kg maximum take off weight range. It offers the best balance of payload capability, endurance and operational cost. It is capable of carrying multiple full-size naval sensors for extended periods and can operate from existing ships, alongside a helicopter, with a low logistical footprint.