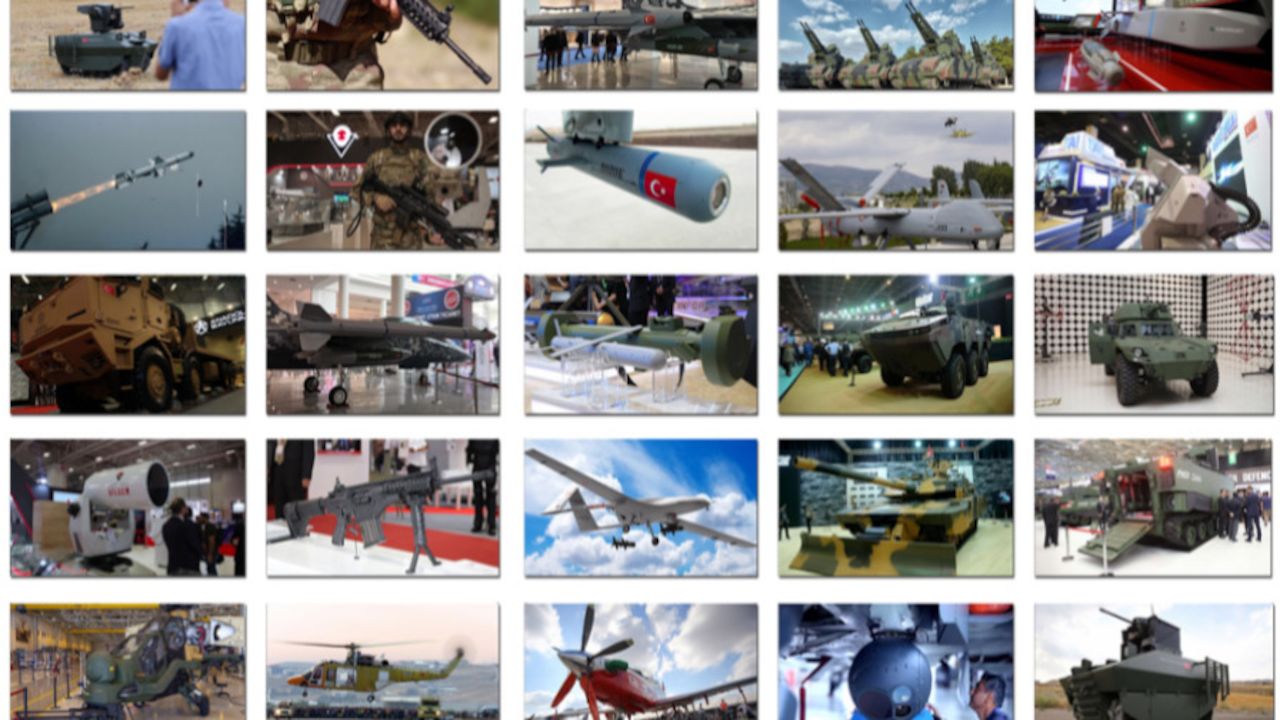 Turkey has achieved a remarkable expansion in the defence sector in the past 20 years. The tangible results of this achievement are platforms such as drones, helicopters, armoured vehicles, and warships. These products incorporate significant psychological and political values, besides industrial and technological aspects. Developments in defence industry are also perceived by the society as becoming self-sufficient thereby having overcome the effects of embargoes and sanctions of the past, as well as a manifestation of Turkey as a technologically advanced country.

Today the Turkish defence industry, its achievements, projects, and activities are constant and popular topics in local media. Also, the performance and impact of Turkish defence products in conflicts and operations in places such as Syria, Libya and Nagorno Karabakh are frequently discussed in academic circles and media, and not surprisingly exploited by politicians.

The Turkish defence industry indeed is blooming, with revenues of approx. $11 billion and seven companies listed in the Top 100 defence contractors of the world. In order to assess the current status and achievements of the sector, we should first have a brief overview of its historical background.

The progress of the sector since the foundation of the Republic in 1923 can be divided into six phases:

1. 1923-1947: First steps: The new Republic which was built upon the ashes of the Ottoman Empire immediately started a construction effort for economy and industry. Several factories for aircraft production, naval shipyard and ammunition workshops were established.

2. 1947-1964: Adhesion to NATO and start of transformation: Turkey placed herself with the Western world after World War 2 and relations with the United States rapidly developed. After Turkey’s commitment to United Nations forces in Korean War, the country was accepted into NATO. Large quantities of American weapons and equipment poured in and the organization, training and inventory of the Turkish Armed Forces were transformed in line with the Alliance.

3. 1964-1985: Johnson’s letter, U.S. arms embargo and paradigm shift: When Turkey attempted to intervene in the crisis in Cyprus in 1964, U.S. President Lyndon Johnson sent a warning letter to his Turkish counterpart Ismet Inonu, reminding the 1947 agreement between the two countries. According to the agreement, Turkey was not allowed to use Americansupplied weapons in an operation that was not approved by Washington. The letter, its contents and style created fury in the Turkish population, and it acted as a reminder of the importance of achieving self-sufficiency in the arms industry. Following Turkey’s military intervention in Cyprus in 1974, the United States imposed an arms embargo in 1975 which quickly damaged Turkish Armed Forces’ capabilities. As a result, Turkey established several national defence industry companies, with the ultimate aim of achieving self-sufficiency.

4. 1985-2004: New start, establishment of a Undersecretariat for Defence Industries: To coordinate activities in defence procurement and the establishment of a national defence industry, a new entity was founded in 1985, the Undersecretariat for Defence Industries (Savunma Sanayii Mustesarligi – SSM). SSM was tasked with preparing industrial plans and coordination and execution of projects for defence industry. It was in this period that Turkey initiated several defence projects with local involvement such as F-16 fighter aircraft, AIFV armoured vehicles, frigates, communication equipment, etc. Until early 2000s local content was increased, and Turkish defence industry quickly developed its capacity and human capital.

5. 2004-2016: Expansion: The year 2004 marked a milestone for the national defence industry. A number of license production or off-the-shelf procurement programs were cancelled and projects through local or co-development were started. National defence companies received an increasing number of contracts. Several high-profile projects such as the MilGem corvette, Altay main battle tank, T129 Atak attack helicopter, and Anka drone programs are products of this period. Under the SSM’s supervision, Turkish Armed Forces Foundation companies such as ASELSAN, TAI, ROKETSAN have become powerhouses of this initiative. This period can be defined as “horizontal expansion”, in terms of number and scope of projects.

6. 2016-today: Reorganization and pushing limits: After the July 15th coup attempt, Turkey has undergone a large scale reorganization in government institutions, bureaucracy and the public sector. The defence sector was no exception and within the reorganization of the state, SSM was put under direct control of the Presidency, changing name to SSB (Savunma Sanayii Baskanligi – Presidency of Defence Industries). It was also during this period that most of the projects started in early 2000s have reached maturity, i.e. completing development phases and switching to serial production and deliveries. This period stimulated a “vertical expansion” of the sector, with the focus being shifted to increasing capabilities in subsystem, component and technology topics through SME’s, R&D and test centers. This period also saw increasing and effective use of locally developed systems and platforms such as drones, electronic warfare equipment and precision guided weapons in operations and conflicts such as those in Syria, Libya and Nagorno Karabakh.

According to the Turkish Defence and Aerospace Industry Manufacturers Association (SASAD – Savunma ve Havacılık Sanayii Imalatcilar Dernegi), the national defence industry accumulated a turnover of $10.884 billion in 2019. This figure represents a 24% increase compared to the previous year, a clear indication of increased defence spending because of the operations in Syria, Libya and Iraq. The total value of orders is $10.671 billion, another indicator of the trend. The amount of resources allocated to research and development (R&D) by sector companies, excluding government support and incentives, is $1.672 billion.

Interestingly, the total value of imports of the sector, which is $3.088 billion, is almost equal to the export. This figure represents one major vulnerability of the Turkish defence sector: dependency on foreign suppliers in critical subsystems and technologies as seen in the issue with engines and transmission systems of several important projects such as T129 attack helicopter, TF-X combat aircraft and MilGem corvette project. As an example, Turkey’s export of T129 helicopter to Pakistan was stalled upon failure to receive export license from United States for the engine.

Turkey’s defence sector and its achievements have become one of the constant items in headlines of the national press, and increasingly so in international media lately. The issue is one of the “supra-political” items in Turkish society, with almost the entire population agreeing on the importance of achieving self-sufficiency in defence manufacturing and development capabilities. Incidents such as the Johnson’s letter and the 1975-78 U.S. arms embargo have contributed to this collective determination.

Turkey’s increasing military capabilities based on the national defence industry have allowed the country greater room for manoeuvre in regional affairs. Thanks to the Armed Forces’ expanding capabilities and also to the export of much more sophisticated complex equipment such as armed drones, guided weapons, communications and electronic warfare systems, Turkey’s defence and security footprint has significantly expanded in the region. Libya, Syria, the increased cooperation with Ukraine and Qatar are several examples of this trend. Therefore, it can be claimed that the national defence industry has become a vital asset in Turkey’s foreign policy and also its national security strategy.

This horizontal and vertical expansion comes with a cost, though. Turkey in early 2000s focused on initiating platform projects such as helicopters, drones, warships and such. These complex platforms are “system of systems”, i.e. incorporating subsystems such as engines, transmission units, electronic and communication equipment, etc. In order to develop and manufacture the platforms, Turkey had to import these subsystems and required know-how from foreign suppliers, mainly US and European firms. This relationship created a dependency, as it became clear with the T129 export issue. Substituting imported subsystems and components with locally developed equivalents requires time consuming, expensive R&D and test works. Therefore, achieving full autarky in defence production seems to be a difficult goal for Turkey.

One major issue for the national defence industry has been the quality and quantity of human resources. The number of personnel is not sufficient for Turkey to undertake all the projects. Furthermore, Turkey has been rapidly losing experienced, skilled engineers to European and American companies for the past 5-10 years, a trend which seriously affects the human quality and corporate memory of the sector.

Turkey’s economy has been suffering due to a combination of factors, mainly structural ones, for the past five years. As a result, the amount of budget allocated to development and procurement programs has become more limited. This factor puts extra stress on undertaking expensive development projects, especially those regarding critical subsystems as mentioned above. Therefore, the Turkish defence sector runs the risk of entering a vicious cycle: In order to sustain production and also exports, the sector has to continue imports. Increase in imports results in foreign trade deficit, further limiting the amount of resources to be allocated to local development project.

Last but not least, Turkey’s foreign relations have a deep impact on the performance and sustainability of the sector. Turkey’s relations with European countries and the United States significantly deteriorated in the past years, resulting in explicit and undeclared sanctions. The latest development took place in December 2019, when the US imposed sanctions under the CAATSA law as a reaction to Turkey’s procurement of S-400 air defence systems from the Russian Federation. The Washington administration had previously removed Turkey from the F35 combat aircraft project and cancelled deliveries of the aircraft. The strained relations of Turkey with the West mean weakening, if not entirely cutting off the vital supply chains from firms of those countries. Finding alternative sources will likely be a challenge for the Turkish defence sector in the coming period.

The Turkish defence sector has achieved a remarkable development in the past 20 years, showing great capabilities in terms of quality, sophistication and dynamism. The results of this performance have recently emerged in terms of products maturing and entering delivery phase and also of successful deployment in various conflicts. However, Turkey’s foreign relations, financial crisis and human resources problems represent major challenges for sustaining and further developing the sector.