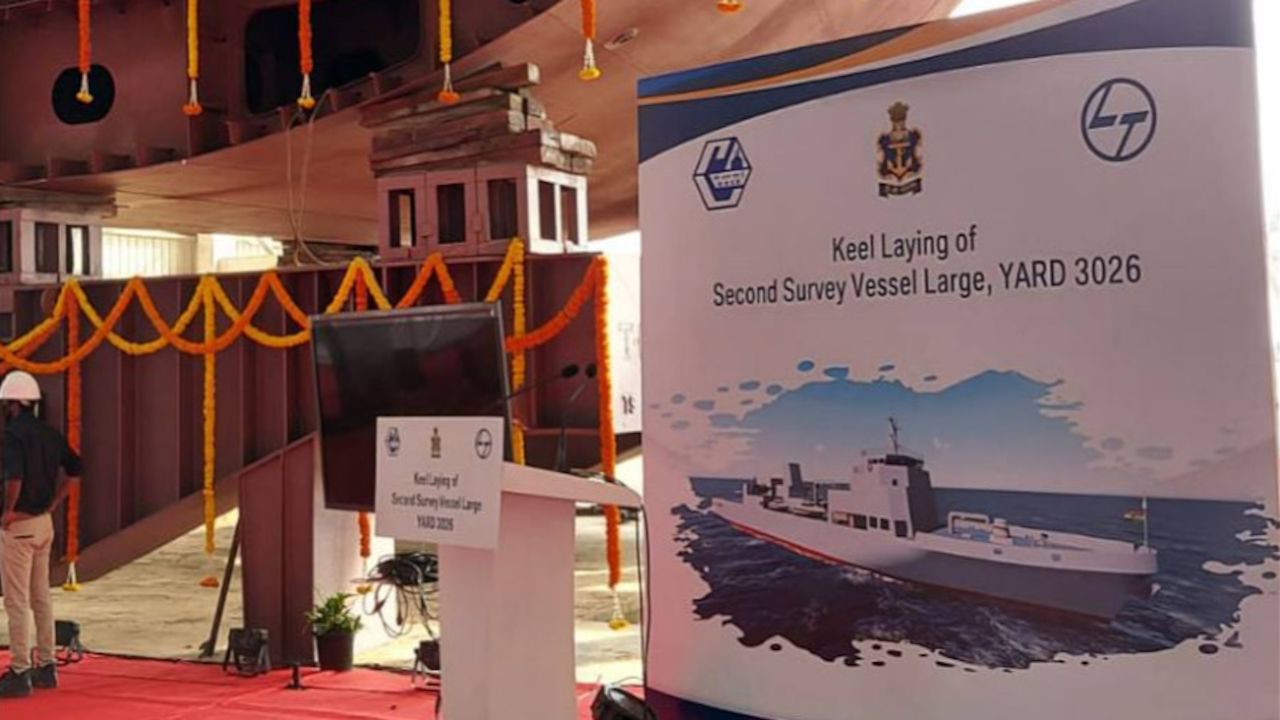 According to a press release published on December 1, 2020, Garden Reach Shipbuilders and Engineers Ltd., (GRSE), Kolkata, laid the keel of the 2nd Survey Vessel (Large) (Yard 3026) at Kattupalli, Chennai. The Virtual Keel Laying ceremony was performed in the august presence of Vice Admiral Vinay Badhwar AVSM, NM, Chief Hydrographer to the Govt. of India. The ceremony was also attended by Rear Admiral VK Saxena, IN (Retd), Chairman & Managing Director, GRSE, other Directors and other senior officials from the Indian Navy and the Shipyard.

The ship is part of the Survey Vessels (Large) project won by GRSE (Garden Reach Shipbuilders and Engineers) in a competitive bidding process on October 18 for an order value of Rs. 2435.15 crore. The 1st ship is to be constructed within 36 months from the contract signing date with a project completion time of 54 months. Part construction of this ship is being carried out at L&T Shipyard, Kattupalli. After launching, the ship will be shifted to GRSE, Kolkata for outfitting, trials, and delivery.

The vessel is 110m long with a deep displacement of 3300 Tons and can accommodate 231 personnel. The vessel is designed for a cruising speed of 16 knots with an in-house GRSE’s Hull Form Design which imparts a superior level of operational efficiency. The Hull form of these new generations Survey Vessel also meets the stringent seakeeping and maneuvering requirements including Helicopter Operations at high sea states. The design of the ship by GRSE’s in-house Design Unit accorded “Centre of Excellence” Unit status by Council of Scientific & Industrial Research (CSIR), Ministry of Science & Technology is a significant step in the “Make in India” initiative of the Govt. of India. With their State-of-the-Art “Survey Payload” comprising of Autonomous Underwater Vehicles (AUVs), Remote Operated Vehicles (ROVs), Multi-Beam Echo Sounders etc, these Survey Ships would prove to be a game-changer in the Indian Navy’s Capabilities for Coastal and Deepwater Hydrographic Surveys aiding Maritime Operations. In their auxiliary role, they will be capable of performing limited search and rescue, limited ocean research, and operate as hospital ship/ casualty holding ships.

GRSE continues to be the epitome of indigenous design and construction of warships. Recently, following the call for “Atmanirbharta”, a state-of-the-art Modern Hull Block Complex and Indigenous Underwater CNC Plasma Cutting Facility were virtually inaugurated by the Hon’ble Raksha Mantri Shri. Rajnath Singh at the RBD Unit of GRSE, to augment the existing infrastructure at the Main Unit of the Shipyard. GRSE’s strategies revolve around shifting to smart manufacturing or Industry 4.0 with innovations in Automation, Robotics, and the Industrial Internet of Things.

GRSE presently has a strong order book of over Rs 26,000 crores and is currently executing three major shipbuilding projects, namely the P17A Project for 3 Advanced Stealth Frigates, 4 Survey Vessels (Large) and 8 Anti-Submarine Warfare Shallow Water Crafts. The 1st P17A Ship is expected to be launched in Dec this year, well ahead of schedule. GRSE delivered the Fast Patrol Vessel (FPV) ICGS Kanaklata Barua, the 105th Warship delivered by the Shipyard, to the Indian Coast Guard in June 2020, despite challenges in operations in a manpower-intensive industry during pandemic times thus reaffirming our motto “Infinite Passion meets Unwavering Commitment”. The Shipyard also plans to deliver two more warships in the coming months.