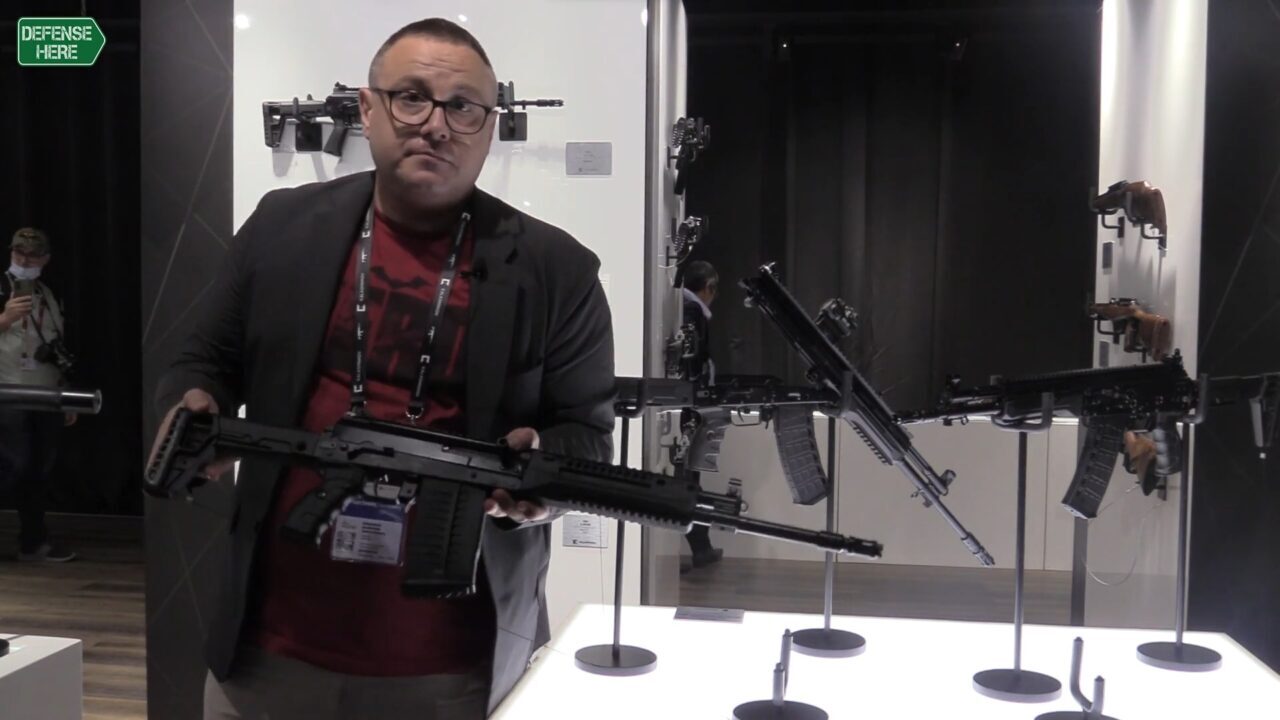 Speaking to Defensehere.com, Valentin Ylasenko, a representative from Kalashnikov talked about some of the newer products of the company aimed at the civilian market and said:

"On this Army 2022 exhibition Kalashnikov Concern presents a new version of sniper rifle SV-21. This is a civilian type of weapon for the precision shooters. This is a bolt action rifle made with two calibers, one of them 7.62x54R and the second one is a .308.

To change the caliber the rifle is built up like AR scheme, you do have a free floated barrel, you do have barrel nut. So, you remove the hand guard, unscrew the barrel nut, locks are on the barrel extension, so you replace the barrel, tighten up the barrel nut, put on the hand guard and it is done. You do have a changeable boltheads, one of each caliber. Rifle uses magazines from Dragunov and for .308 you use magazines from Tiger Carbine. We use Remington 700 compatible trigger on this rifle and the stock is fully adjustable. So, the rifle achieves half MOA accuracy .308 and under 1 MOA accuracy from 7.62x54R.

Here we have the Saiga PPK. This is a pistol caliber carbine for civilians based on PPK-20, which is currently being adopted for Russian Army. The difference is that you do have only semiauto version of it, and you do have a longer barrel to ensure it falls under legislation and it’s cover with a dummy suppressor. The carbine does have ambidextrous safety lever, we do have the top cover made as AK12 top cover which is completely removable. We do have a folding stock to the right and of course you can’t shoot when its folded. The carbine in this MP style caliber is aimed to fulfil the role of training carbine inside the training facility for the guys who do want to shoot after work in the shooting range inside the town certified for 9mm parabellum.

Here we have AKV721, this is our new project in .308 Winchester. It does have milled upper receiver and stamped lower receiver. We do have free floated handguard. The barrel over the midweight contour 41.5mm long and the muzzle break is on the thread M14 by 1 left hand. So we do have the folding stock. Ambidextrous fire selector, semiauto only and the main target of the project was to make a gun which do have strong connection between barrel and the optics instead of the top cover of the receiver. Because its not detachable as you can see here you use a hinge so you have your optics co-axial with the barrel.

Here we have Saiga AKSU and this is civilian version of AK-74SU carbine rifle. So in civilian version it has a longer barrel in accordance with Russian law, it has a dummy suppressor which covers the barrel. Of course, its semiauto only, it has a folding stock and its aimed at the guys who want to have the exact replica in the same caliber as the original rifle.

In Russia you can’t sell to civilians which shoots full auto and you should have different rifling to ensure that its not like a military weapon. To separate bullets shot from a military rifle from a civilian and you can’t have rifle shorter than 800 mm long when it is able to make a shot. You should be over 21 years old, you should pass all medical tests and do have permission from police and you can purchase smooth bore only for five years and after five years you can purchase rifle. You can own at the same time up to 5 smooth bore and up to 5 rifled. You cant own pistols. So it is one restriction. You can only own pistol inside training facility and store it there. But you can own less lethal pistol, 2 items.
"