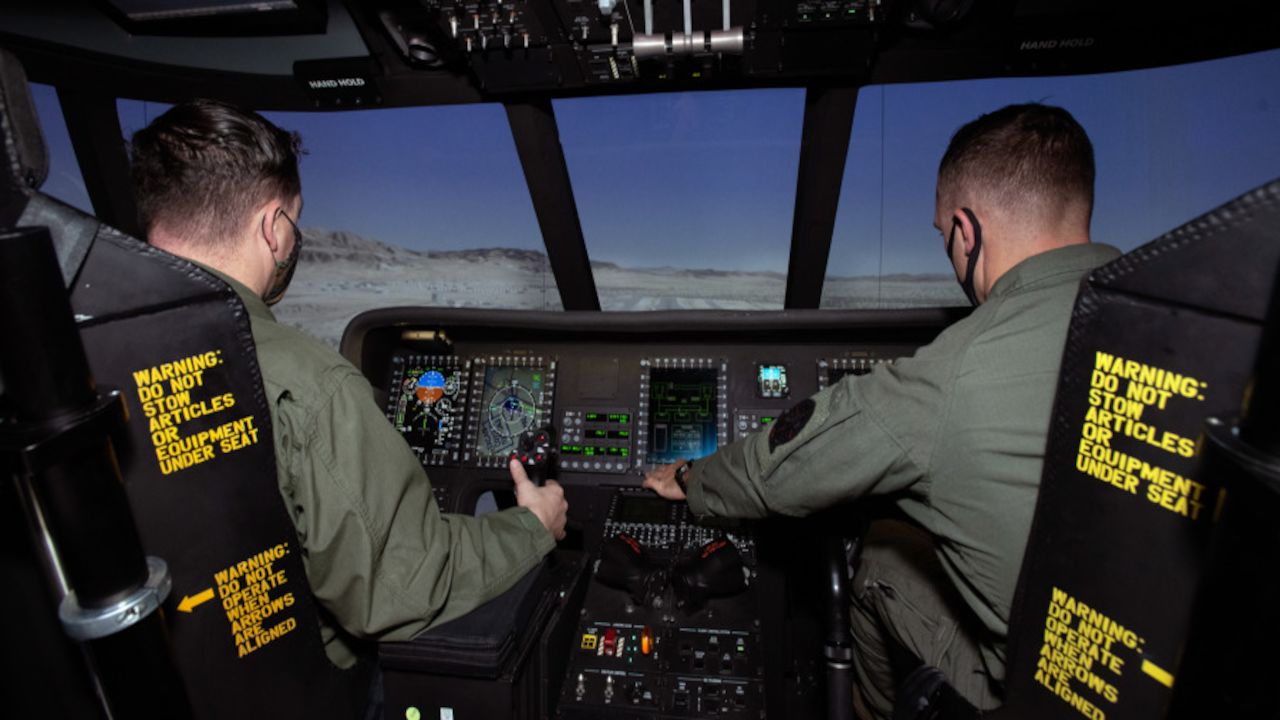 U.S. Marines are now preparing to fly, maintain and sustain the CH-53K heavy lift helicopter, which will enable them to safely complete longer-range missions in harsher environments compared to the current fleet of aircraft. The suite of training devices from Lockheed Martin (NYSE: LMT) were recently declared Ready for Training at Marine Corps Air Station (MCAS) New River in Jacksonville, North Carolina.

“These training devices will prepare aircrew and maintainers for the full suite of capabilities of the CH-53K in a safe and cost-effective manner,” said Tom Gordon, Lockheed Martin, vice president of Training and Simulation Solutions. “Crews can rehearse for operational deployment, ensuring the U.S. Marines are ready to successfully complete their missions.”

The Containerized Flight Training Device (CFTD) is a portable full-mission flight simulator that will allow flight crews to train on the full scope of Marine Corps heavy lift missions, including external lift operations.

The CFTD replicates the functionality, flight characteristics, mission profiles and unmatched capabilities of the CH-53K helicopter. The device can replicate the various environmental conditions that the aircraft is likely to fly in as well as a multitude of mission profiles in the operation of a true heavy lift helicopter.

The HEMT is a computer-based lab that familiarizes the mechanic with maintenance tasks they perform, including tools, functions and checks. By virtually depicting the inside and outside of the aircraft and providing feedback, maintainers can learn many of the maintenance functions utilizing the HEMT prior to working on the aircraft.

The CMT is a full-scale mock-up of the aircraft and is the final step of familiarizing the maintainer with the aircraft. The device allows students to interact with the physical controls of the aircraft to learn to remove and install hardware and perform functional checks. An instructor operating system assigns tasks and monitors progress for focused feedback.

“The training devices will ensure a flawless entry into service for the CH-53K heavy lift helicopter,” said Bill Falk, Sikorsky CH-53K program director. “We are proud to build this 21st century helicopter giving mission flexibility to the U.S. Marine Corps.”

The CH-53K program has five aircraft on the final assembly line in Connecticut and over two dozen in various stages of production. In October, the U.S. Navy awarded Sikorsky a contract to build six more heavy lift helicopters. The program will deliver the first low rate initial production aircraft in September 2021.

The CH-53K is also nearing the conclusion of the developmental flight test events to support Initial Operational Test & Evaluation (IOT&E) in 2021 and first deployment in 2023-2024.

The CH-53K has flown more than 2,100 flight hours validating the aircraft’s performance, including testing on a ship and in both hot and cold environments. This year, the aircraft completed air-to-air refueling with a 27,000-lb. external load demonstrating its ability to enable heavy-lift transport from sea to shore.

The CH-53K, which can lift 36,000 pounds, is the most powerful heavy lift helicopter ever built in the United States. The King Stallion’s technologically advanced design will meet the future warfighting requirements for decades to come, enabling missions like humanitarian aid, troop and equipment transport, casualty evacuation (CASEVAC), support of special operations forces, and Tactical Recovery of Aircraft and Personnel (TRAP).