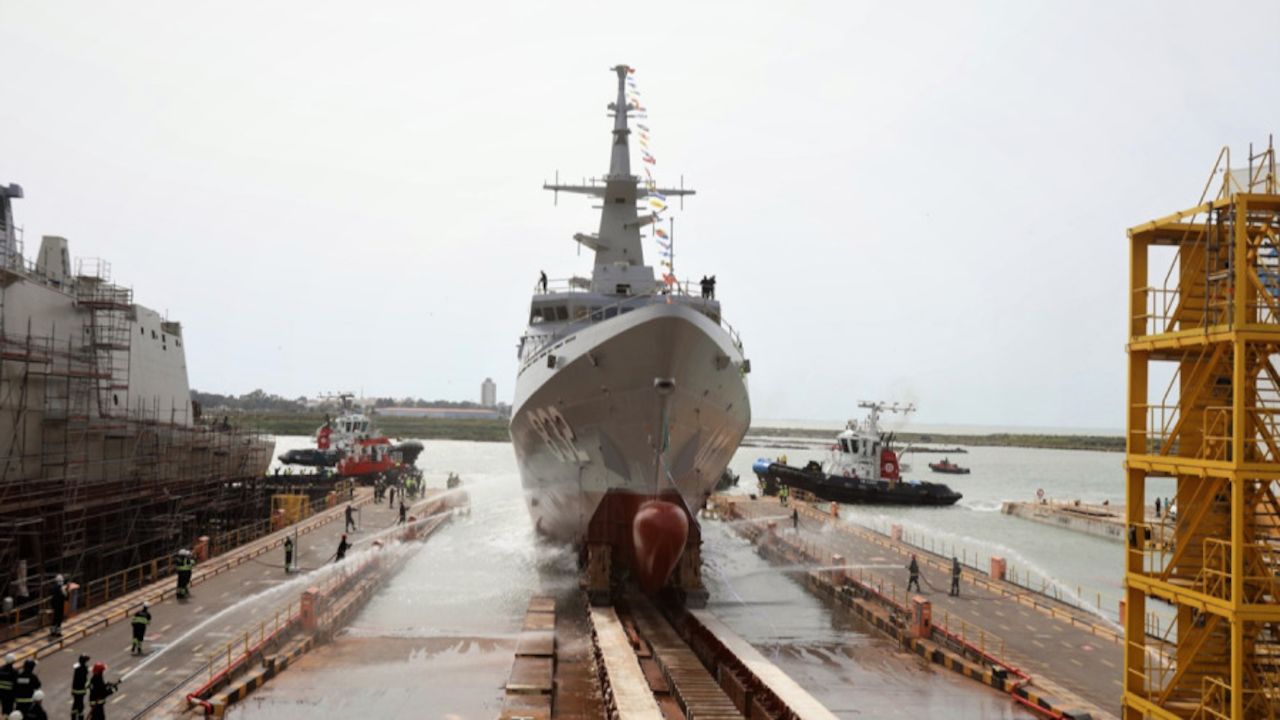 Navantia announced that it has launched the third of the five corvettes built for the Royal Saudi Naval Forces (RSNF), named HAIL as a tribute to this city in the north of Saudi Arabia.

The launching has taken place at 16.15 local time, the most convenient time given the tides and the winds. Due to the weather forecast for the next days, which anticipates strong winds in the area, Navantia has decided to cancel the launching ceremony initially scheduled for Tuesday, 30th March.

Instead, Navantia shipyard in San Fernando has held the launching as a working event. The Chief Operations Officer, Gonzalo Mateo-Guerrero, and the director of Navantia Bahía de Cádiz shipyards, José Antonio Rodríguez Poch, have been present at the launching, as well as Captain Abdullah Alsheri, Program Officer Avante 2200, on behalf of His Excellency Vice-Admiral Fahad Bin Abdullah Al-Ghofaily, Commander of the Royal Saudi Naval Forces.

The corvette has touched the water after sliding along the slipway and the construction of the ship will continue in the water until its delivery to the Royal Saudi Naval Forces in December 2022. Both national anthems of Saudi Arabia and Spain have been played.

Corvette HAIL is the third of five corvettes being built by Navantia in the Avante 2200 program. It has a length of 104 meters, a beam of 14 and she will be able to transport a total of 102 people including crew and passengers. It will reach a maximum speed of 27 knots and, among other things, she has the capacity to carry provisions on board for 21 days.

The design of the corvettes is of the latest generation, maximizing the participation of Navantia by incorporating its own products, such as the CATIZ Combat System, the HERMESYS Integrated Communications System, the DORNA Firing Direction, the Integrated Platform Control System and the MINERVA Integrated Bridge, together with other equipment developed by Navantia under license, such as the MTU Engines or the RENK Reduction Gearboxes.

This contract, which came into force in November 2018, strengthens the immediate future of Navantia and benefits all the shipyards of the company and its auxiliary industry, especially the whole Bay of Cadiz.

Specifically, it will mean a global workload of around seven million hours, that is, 6,000 posts annually during five years. More than 1,100 will be Navantia employees; more than 1,800, employees from auxiliary industry and other 3,000 are indirect employees from other suppliers. There will be more than 100 auxiliary companies that will collaborate in this project.

This program, whose last vessel must be delivered in 2024, includes, in addition to construction, Life Cycle Support for five years, from the delivery of the first vessel, with an option for another five years.

On the other hand, the contract also includes the supply of several services, such as Integrated Logistic Support, Operational and Maintenance Training, Supply of Training and Education Centers for the Combat System and Platform Control System of the ships, Life Cycle Support and the systems for the maintenance of the ships in the Jeddah Naval Base.