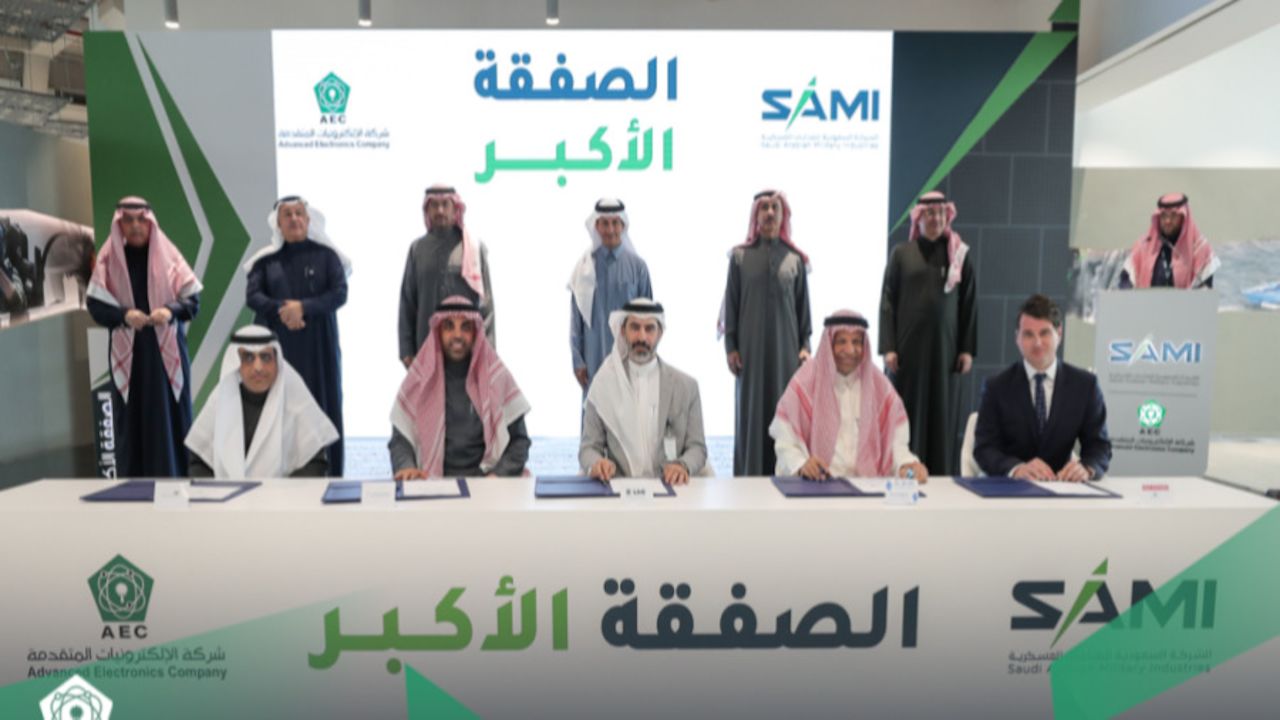 Saudi Arabian Military Industries (SAMI), a wholly owned subsidiary of the Public Investment Fund (PIF), announced that it has acquired Advanced Electronics Company (AEC) as part of the largest military industries deal ever concluded in the Kingdom of Saudi Arabia. The purchase is expected to complete in the first quarter of 2021 following regulatory approvals. As a result, AEC will become a 100% Saudi-owned company.

The acquisition was announced during a ceremony organized by SAMI in the presence of the members of SAMI’s and AEC’s Board of Directors, and senior officials from the Ministry of Defense, General Authority for Military Industries (GAMI), PIF, BAE Systems Saudi Arabia, Saudi Arabian Airlines (SAUDIA), and other stakeholders.

Commenting on the deal, H.E. Ahmed Al-Khateeb, Chairman of SAMI, said: “This deal strengthens SAMI’s presence in the strategically important defense industries market and supports its plans to transfer and localize the military industries. The acquisition will also enhance AEC’s opportunities to expand and compete in its field.” H.E. Al-Khateeb affirmed the support of H.R.H. the Minister of Defense for the transfer and localization of military industries as a key part of the Kingdom's Vision 2030. “This achievement also supports PIF’s efforts through SAMI in localizing cutting-edge technology and knowledge, as well as building strategic economic partnerships.”

H.E. Al-Khateeb added, “Considered the ‘crown jewel’ of Saudi Arabia’s military industries and a proud accomplishment for its citizens, AEC will bring about transformative change in the Kingdom’s defense sector by enhancing the industry’s competencies and advancing innovation. With state-of-the-art products, innovative technologies, several decades of experience, and the collective efforts of both SAMI and AEC, the acquisition will shape the future of the domestic defense ecosystem and make long-lasting contributions to the national economy for the upcoming years, through skills development, employment generation, and exports.”

Eng. Walid Abukhaled, CEO of SAMI, thanked the Public Investment Fund (PIF) for its unlimited support and efforts that contributed to the success of the acquisition. He asserted that the deal would serve to enhance the local defense sector, and support and realize the localization rates required by the local content of the military industries.

AEC is considered a major facilitator of Saudi Arabia’s Vision 2030 thanks to its 32-year experience in the military industries market and the leading role it plays in Defense and Aerospace and the development of security local systems. In addition to facilitating the transfer of technology and enhancing local production, the acquisition will enable SAMI to consolidate its defense electronics sector.

SAMI’s acquisition of AEC will support its strategic plan, which aims to expand its business and enter the progressive Defense Electronics sector. The acquisition will also contribute to the implementation of SAMI’s plans to transfer technologies and localize domestic military industries, as well as to strengthen the Saudi defense ecosystem, in line with the directives of the Kingdom’s Vision 2030.

Abdulaziz Al-Duailej, CEO of AEC, said: “SAMI’s acquisition of AEC stock will help us reach our goals and strategic plans for the next five years. It also places us under the umbrella of the Public Investment Fund (PIF), the KSA’s sovereign wealth fund, which constitutes a milestone for the company and fills us with pride as directors and employees.”

He added: “This achievement was realized thanks to the commitment, experience and concerted efforts of all the employees in both companies. The deal will provide AEC with the opportunity to further strengthen its position in the military industries market and explore new horizons in advanced technologies in the Kingdom and beyond, as well as support the continuous development of the capacities of national cadres.”

AEC has played since 1988 a pioneering role in the fields of modern electronics, manufacturing, system integration, and repair and maintenance services, thereby becoming a major regional player renowned for innovation. Around 85% of the company’s employees are Saudi nationals, including more than 300 of its male and female engineers. AEC also has over 100 strategic partners and has successfully completed more than 1,000 projects. Furthermore, the company has witnessed steady growth in sales in recent years. In 2019, net sales reached SAR 2.32 billion – up from SAR 2.07 billion in 2018 and SAR 1.92 billion in 2017.

Since its inception in mid-2017 by the Public Investment Fund (PIF), SAMI has been leading Saudi Arabia’s efforts in developing self-sufficient defense capabilities through its fast-growing portfolio of military products and services, spanning across its business ‎divisions, namely Aeronautics, Land Systems, Weapons and Missiles, Defense Electronics, and Emerging Technologies.