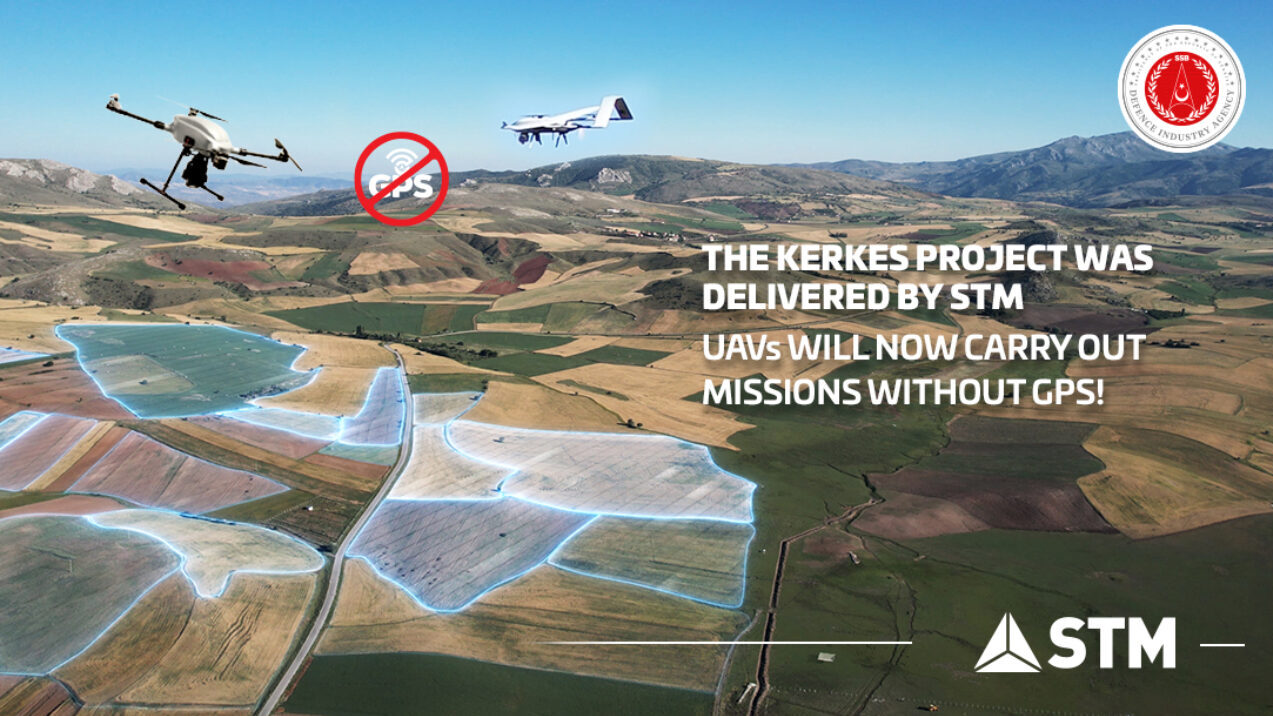 STM, one of Türkiye’s leading defence companies, has successfully completed and delivered the KERKES Project, enabling UAV platforms to operate in environments with no GPS coverage.

President Erdoğan referred to KERKES as “a large-scale project that is of great importance to us”, emphasizing that the Türkiye is one of only a few countries working in this field.

In line with Türkiye’s goal of establishing a fully independent defence sector, STM Savunma Teknolojileri Mühendislik ve Tic. A.Ş. continuously pursues its activities under the leadership of the Defence Industry Agency (SSB) of the Republic of Türkiye, and has produced another game-changing technology for the country.

STM has concluded the Global Positioning System Independent Autonomous Navigation System Development (KERKES) Project, launched in 2019 under the leadership of the SSB. The acceptance process of the KERKES Project, which allows UAV platforms to operate GPS-denied environments, has been completed.

Demir: KERKES will prove to be a game-changing technology

Prof. Dr. İsmail Demir, President of the SSB, shared news of the development on his Twitter account, stating: “We have successfully completed the KERKES Project, which allows UAV platforms to operate in environments in which there is no GPS coverage. With this technology, which only a few countries are working on, our tactical mini-UAVs will be able to carry out missions without being affected by enemy electronic warfare threats such as GPS jammers. This critical capability we have introduced to our country will serve as a deterrent for our army in homeland defence, and will be a game-changing technology in combat environments.”

Güleryüz: KERKES capability can also be integrated into land and sea vehicles

Özgür Güleryüz, General Manager of STM, stated that STM had applied its national engineering capabilities to the introduction of this technology to Türkiye, as a field in which only a few countries are engaged. Güleryüz stated that KERKES will allow UAVs to carry out missions without being affected by enemy electronic warfare threats, adding, “When there is no communication, location estimation is achieved by processing the data and images received from the sensors, allowing strikes against targets detected by artificial intelligence and deep learning techniques. This capability set obtained as a result of the KERKES Project will be adaptable to other mini/micro, tactical or operational UAV systems. While expressing that this capability can also be integrated into land and naval platforms, I would like to add that we are always ready to meet the advanced technology needs of our soldiers in the field.”

President Erdoğan: KERKES is of great importance to us

President Recep Tayyip Erdoğan, speaking at the 2020 Biannual Presidential Cabinet Evaluation Meeting, referred to KERKES as “a large-scale project that is of great importance to us”.

Rotary-wing and fixed-wing UAVs are seeing increasing use on the battlefield, allowing fast and reliable attacks with the support of global navigation satellite systems (GNSS), and in particular, the global positioning system (GPS). It is well known that GPS and RF services can easily be disrupted or spoofed in the operational arena, while there are situations where these services cannot be used uninterruptedly in line with the information received from the field. This can make it difficult for UAVs to fulfill their missions.

The contract for KERKES – the Global Positioning System Independent Autonomous Navigation System Development Project – was signed between the SSB and STM on 23 August, 2019. With the completion of the KERKES Project, developed by STM engineers and involving sophisticated computer vision techniques and artificial intelligence algorithms, mini/micro class UAVs will now be able to perform missions under day or night conditions in environments where there is no GPS coverage. With the KERKES Project, which aims to support rotary-wing (multi-rotor) and fixed-wing UAVs in carrying out missions in environments where there is no GPS coverage, location estimation and the execution of missions can be achieved through navigation based on object recognition and deep learning capabilities. Using this system, the UAV begins its mission with a loaded map, compares the map with the data obtained from the field, and successfully completes its mission without needing to rely on GPS. KERKES will allow UAVs to carry out their missions without being affected by enemy electronic warfare threats such as GPS jammers.