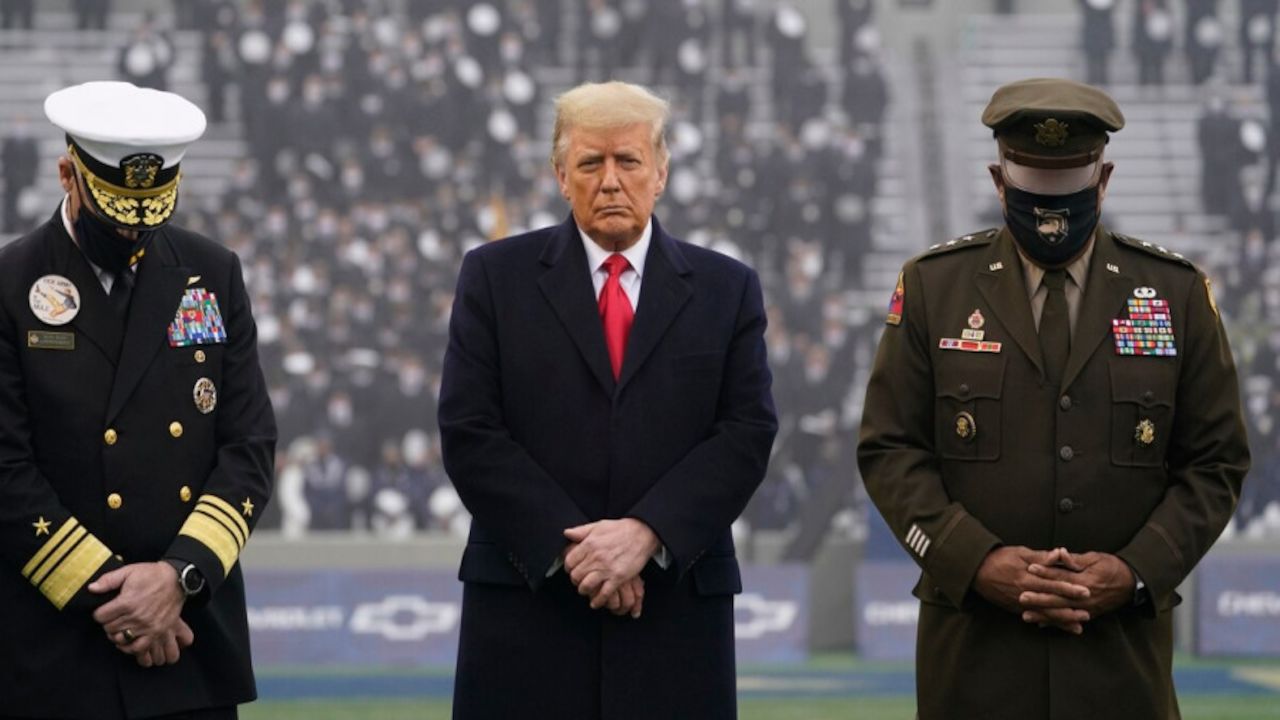 President Donald Trump vetoed the annual defense authorization bill on Wednesday after a delay of more than a week, saying the the massive policy measure is a “gift” to China and Russia and fails to include several provisions he sees as necessary for national defense.

“The act fails to include critical national security measures, includes provisions that fail to respect our veterans and our military’s history, and contradicts efforts by my Administration to put America first in our national security and foreign policy actions,” Trump wrote in a message to Congress announcing the veto.

“I will not approve this bill, which would put the interests of the Washington, D.C. establishment over those of the American people.”

The move for now sidelines the 4,500-plus-page authorization bill, which authorizes $740.5 billion in spending and is needed to renew a broad array military specialty pays, start new equipment purchases and launch new programs at the Pentagon. Lawmakers have characterized it as “must-have” legislation, and warned that if it doesn’t become law, troops and families would see a host of cascading negative effects like lost bonuses and cancelled support services.

The bill passed both chambers by margins wide enough to override Trump’s attempted block, but the timing of the veto has created some holiday logistical problems for lawmakers.

Both chambers left town earlier this week after finalizing plans for a full-year spending measure and a new coronavirus relief package. They were originally due back on Jan. 3 for the start of the 117th session of Congress.

But in anticipation of the presidential veto, House Rules Committee leaders set up a possible veto override in that chamber for Dec. 28. Senators are expected to return to town on Dec. 29 for their own vote, a process that could take several days if individuals offer objections to quick action.

Late Monday night, Senate Majority Leader Mitch McConnell, R-Ky., characterized the defense bill as must-have legislation, because it “redoubles our commitment to modernization, advances cutting-edge capabilities, and equips our military with the tools and resources they need to compete with our great power adversaries on land, on sea, in the air, and in cyberspace.”

In recent days, Senate Armed Services Committee Chairman Jim Inhofe, R-Okla. — a staunch defender of Trump who publicly asked the president not to veto the bill — has said he is confident the chamber will find a way to get the measure passed into law.

Trump has used his veto power eight times in the last four years, and Congress has failed to override that move every time. But none of those measures were as popular as the annual defense authorization bill, which has passed for 59 consecutive years, despite ever-shifting ideological fights on Capitol Hill.

The mammoth defense bill passed the Senate by a 84-13 margin and the House by a 355-78 vote, with strong support from Republicans in both chambers.

Trump’s veto threats in recent weeks have referenced unspecified concerns related to China, something that lawmakers from both parties have strongly pushed back against.

“President Trump clearly hasn’t read the bill, nor does he understand what’s in it,” Senate Armed Services Committee ranking member Jack Reed, D-R.I. said in a statement Dec. 13. “There are several bipartisan provisions in here that get tougher on China than the Trump Administration has ever been.”

But the commander-in-chief has also offered two other main reasons for his opposition to the measure: its lack of language repealing legal protections for social media companies (known more commonly as Section 230), and its inclusion of language mandating name changes for military bases that currently honor Confederate leaders.

“Section 230 facilitates the spread of foreign disinformation online, which is a serious threat to our national security and election integrity,” Trump wrote in his veto message. “It must be repealed.”

Inhofe has said he agrees with Trump’s concerns on the social media issue but added that the defense bill is the wrong place to address them. The issue wasn’t included in either chamber’s individual drafts of the legislation, and only brought up by Trump after a final draft had been agreed upon.

Trump, who is set to leave office in less than a month, has said that dealing with the issue in later legislation is not an acceptable plan.

The president’s objections to the base-naming provisions have been known since the summer.

“My administration respects the legacy of the millions of American servicemen and women who have served with honor at these military bases, and who, from these locations, have fought, bled, and died for their country,” he said in his veto message.

But a bipartisan group of lawmakers pushed through the changes anyway, saying that the racist legacy of the Confederacy linked to the names makes them unacceptable in today’s military.

Trump also lamented sections of the measure that would require reporting to Congress before drawing down troops levels in Afghanistan and some overseas military bases, saying they run contrary to his promises to finish the “endless wars” of his predecessors.

House Armed Services Committee Chairman Adam Smith, D-Wash., has said if Congress does not override the veto, lawmakers won’t be able to find another way to authorize those programs and benefits in the short term.