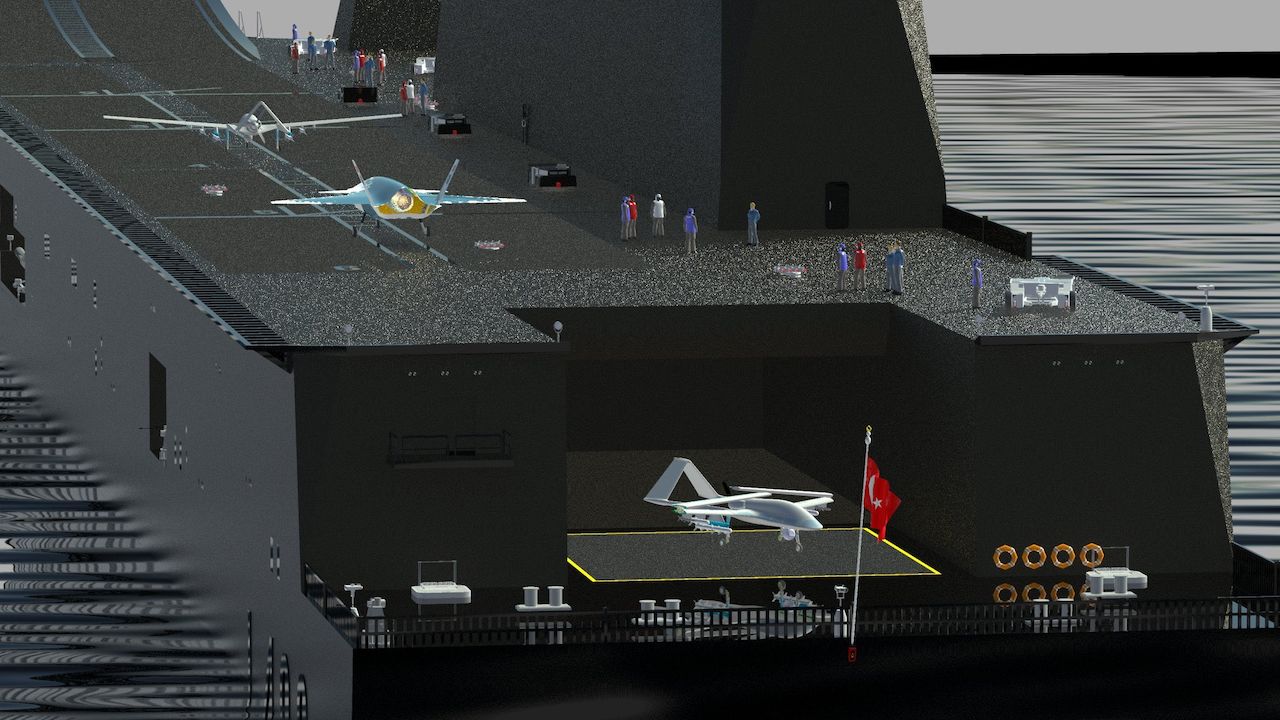 Ismail Demir, head of the Presidency of Defense Industries (SSB), spoke to Anadolu Agency (AA) about the current projects being carried out by the Turkish defense industry. He outlined that building an aircraft carrier should be considered part of Turkey's vision of “being a global power.”

Demir stated that an aircraft carrier cannot be categorized as a single type of ship and that it is a concept they have the ability to work around.

The TCG Anadolu was initially classified as an aircraft carrier by the press, he said, which it actually is not.

“It was planned as a landing ship with a dock,” Demir said, however, once it was understood that it is possible to deploy unmanned aerial vehicles (UAVs) or unmanned combat aerial vehicles (UCAVs) on the soon to be operational Anadolu ship, “we started work on this concept.”

Demir said that the primary aim is for the ship to be put into service as soon as possible, noting that deployment of the Bayraktar TB3 UCAV, which is currently planned as a vertical takeoff and landing (VTOL) combat drone, will follow.

Although the ship will be able to carry combat helicopters on its landing deck, Turkey does not currently operate a plane that can take off from the vessel. The TB3, with its folding-wing design, could deploy from the short naval runways.

With some sections already in production, the TB3 is expected to see its first test flight next year.

Moreover, Demir stressed that a second and more comprehensive vessel – that could be classified as an actual aircraft carrier – as announced by President Recep Tayyip Erdoğan is on the agenda.

Demir said that this topic was also discussed with his Spanish counterparts who recently showed interest.

“There is an approach that it would be appropriate to consider a larger ship in a format that will accommodate several types of UAVs/UCAVs with jet engines and propellers. We will work further on it. It is an idea at the moment, but we are discussing this matter with various interlocutors,” he said.

Commenting on other local defense industry projects, Demir said the construction process for the prototype of a domestic assault boat project, namely the Fast Attack Craft (FAC-55), is set to start in 2022.

The design is ready, he said, and the development process of the systems continues.

The FAC-55 by Turkish defense firm Defense Technologies Engineering and Trade Inc. (STM) is a monohull vessel equipped with a gas turbine propulsion system that has been designed to perform sea warfare and patrol duties on the open waters in challenging weather conditions.

Sungur, developed by Roketsan and repeatedly described as the latest addition to the country's progressive air defense system, will be integrated into land, air and sea platforms with its portable feature.

The Hisar A+ system has a range of 15 kilometers (9.3 miles) while the Hisar O+ system reaches 25 kilometers.

Answering questions about export activities in the defense and aerospace industry, Demir pointed out that exports in the defense industry are not limited to just commercial and technical issues, but that political dynamics are also at play.

"There are many factors such as your relations with a specific country, the political pressures that the country may be exposed to, its historical connections,” he said, adding that as interest in Turkish defense products increases, awareness also rises.

Another factor that would boost Turkey’s exports in the field, Demir said, is another country purchasing then using Turkish defense products in the field.

There is a huge amount of interest from African countries in Turkey’s defense industry, Demir said, commenting on the high interest witnessed during this year’s International Defense Industry Fair (IDEF) held in Istanbul.