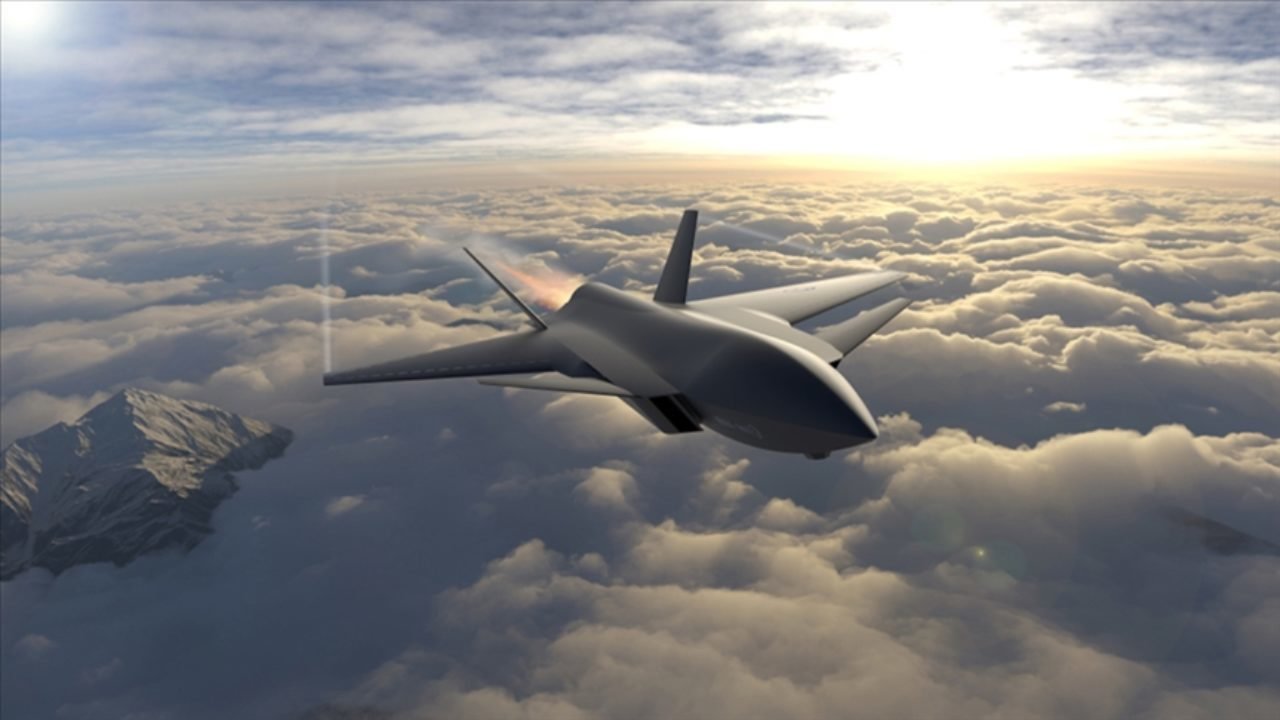 Baykar Technology has recently revealed a computer-generated video showing the features and capabilities of the Bayraktar Kizilelma armed drone. The company stated that the first flight of the Kizilelma is planned for 2023.

The Kizilelma is the latest member of the Bayraktar drone series by Baykar Technology. The design was first revealed to the public in July 2021. The program was previously known as “Muharip Insansiz Ucak Sistemi” (MIUS, Unmanned Combat Aircraft System).

The name “Kizilelma” (“Red Apple” in Turkish) was announced in March 2022. The concept of “red apple” is important in Turkish tradition, symbolizing an idea or ultimate goal for the nation or state. The name, therefore, has a special meaning, manifesting the significance of this challenging project for the company and for Turkey.

The Kizilelma is an armed drone, powered by a single turbofan engine. The aircraft has delta wing and canard configuration: the small forewings (canards) are mounted forward of the main wings, which have triangular shape. The overall geometry of the airframe is consistent with contemporary stealth aircraft design with minimum protrusions and body angles seemingly optimized for decreasing the radar cross section (RCS). It can be assumed that the airframe coating and the paint will be of radar-absorbing material (RAM) for better stealth.

According to technical specifications shared by Baykar Technology, the Kizilelma will be able to remain airborne for five hours and will have an operational ceiling of 35,000 feet. The maximum takeoff weight of the aircraft will be six tons with a payload capacity of 1.5 tons. The maximum combat radius, which is the maximum distance from its base the Kizilelma can cover to perform combat missions, is stated as 500 nm (about 925 km).

The Kizilelma will have an internal weapons bay to carry precision-guided missiles and bombs, a feature that further contributes to the aircraft’s stealth characteristics. Although the images and videos released by Baykar Technology do not show any hardpoints under the wings for carrying weapons or other systems, their presence is highly possible.

The Turkish defense industry offers a wide range of precision-guided weapon systems for the Kizilelma. Among them are the SOM-J air-to-surface cruise missile, the HGK, the LGK, the Minyatür Bomba (MB), TEBER and Lacin precision guided bombs, ÇAKIR air-launched anti-ship missile, and Gökdoğan and Bozdoğan air-to-air missiles. The main sensor of the Kizilelma is planned to be an active electronically scanned array (AESA) radar system, currently being developed by ASELSAN as well as advanced electro-optical cameras and electronic warfare systems.

The role of armed drones in the future of airpower

Recent advances in sensors, electronics, and artificial intelligence (AI) have made it possible to design and manufacture more sophisticated drones, equipped with multiple sensors and assessing more autonomy during flight. Since the early 2000s, larger drones powered by jet engines and capable of carrying precision-guided weapon systems, have begun appearing.

The emergence of unmanned combat aircraft systems (UCAS) stimulated a debate among aerospace and defense circles as well as security planners and decision-makers on the future of airpower. The technological developments have begun to indicate the coming of fully autonomous combat aircraft that can undertake various high-risk missions, thereby largely eliminating the necessity of piloted aircraft—if not fully eliminating this need in the not-too-distant future.

One of the most heated debate topics on the future of air warfare is the composition of the combat airpower of air forces, whether or not to switch to an all-UCAS structure or a combination of manned and unmanned platforms, and in the case of the latter the nature of the composition.

There are three different ideas on the role of UCAS in the future of airpower. The first is an all-UCAS air force, where air-to-air and air-to-ground missions are undertaken by a single or various types of combat drones. The air-to-air missions include combat air patrol (CAP), interception of enemy aircraft, and the escort of friendly air, sea, or land assets against air threats.

These requirements put a heavy load on the sensors and computing systems of a drone. The software and hardware technology are promising in terms of providing effective solutions to these cognitive challenges, but the decision-making cycle and the delegation of authority to a fully autonomous system in air-to-air combat is the subject of a complex ethical, hierarchical, and organizational debate, rather than a technological issue.

The second school of thought regarding the future of airpower is creating a mixture of staffed and unmanned systems, deploying drones for high-risk missions such as SEAD/DEAD, electronic warfare, and precision strike of HVTs from standoff ranges. In this approach, known as “manned-unmanned teaming” (MUM-T), the most prominent scheme is to use a number of UCAS under the leadership of a piloted combat aircraft.

The UCAS deployed in this model is named a “loyal wingman.” A drone with enough flight performance to accompany fighters and the intelligence needed to semi-autonomously support them can be described as a “loyal wingman.” There are several loyal wingmen development projects in the world, such as the Kratos XQ-58A Valkyrie, Boeing MQ-28 (Ghost Bat), and Sukhoi S-70 Okhotnik.

The third approach is the incremental take-over of combat missions by UCAS. This argument can be considered as the middle ground between the previous two concepts. While it is true that building up a fully drone-based air force is more of an organizational, ethical, and doctrinal problem, it may indeed be an eventuality. UCAS are already suited for the majority of air-to-ground missions while optimizing them with air-to-air combat will require more research on AI and well-defined operational concepts as well as legal and ethical frameworks.

The Turkish Air Force (TurAF) combat fleet consists of around 240 F-16C/D Fighting Falcon and 40 F-4E 2020 aircraft. These combat aircraft are supported by seven KC-135R tankers and four E-7T Barış Kartalı airborne early warning and control (AEW&C) aircraft. The earlier models of the F-16 fleet, around 35 Block 30 type F-16s have been receiving extensive structural upgrades which will allow them to operate well until the 2030s.

The TurAF originally planned to induct the F-35A Joint Strike Fighter to replace the F-4E 2020 fleet and operate with the Milli Muharip Ucak (MMU, TF-X) which will enter service in the late 2020s and which would replace the F-16s. However, after Turkey’s acquisition of the S-400 air defense system from the Russian Federation in 2019, the United States cancelled the delivery of the F-35As to TurAF and removed Turkey from the project.

This development affected the TurAF’s modernization plans. As a result, to fill the capability gap until the MMUs arrive, Turkey requested the sale of 40 F-16Vs and 80 kits to upgrade existing F-16s to the F-16V standard. The F-16V is the latest model of the F-16 family and incorporates advanced sensors and capabilities.