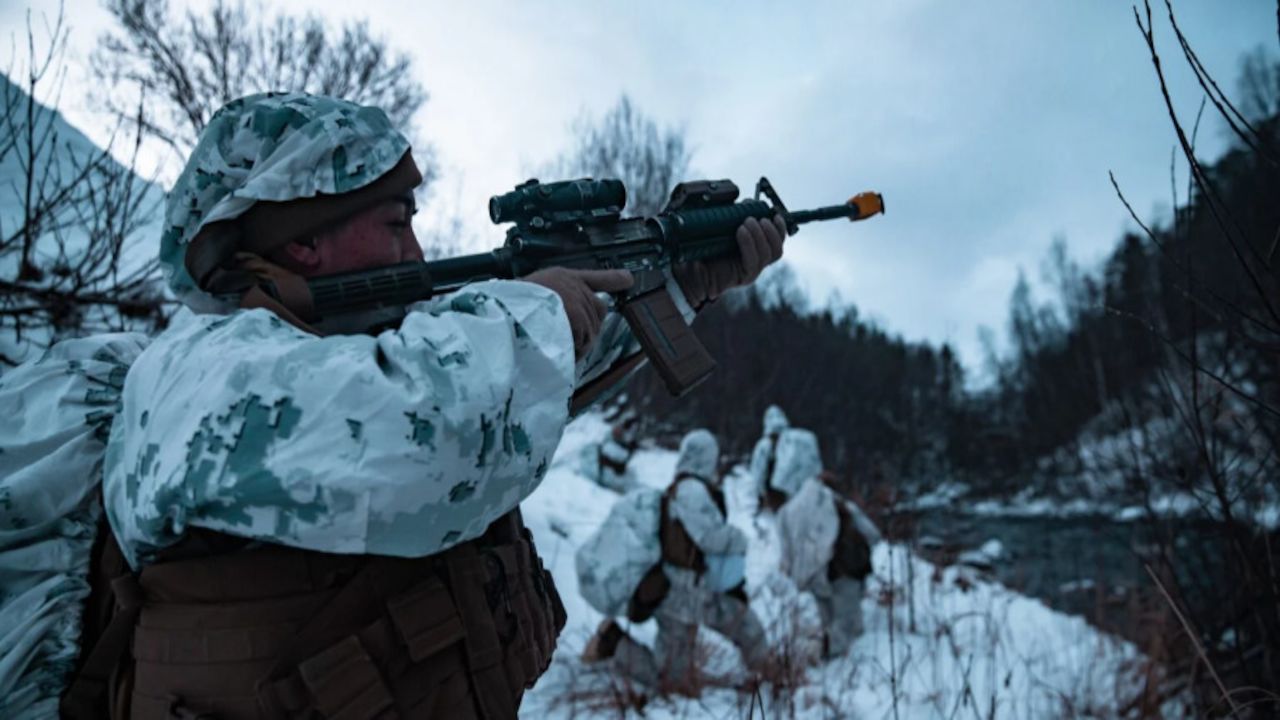 Reindeer II was a bilateral training exercise hosted by the Norwegian military to increase support capabilities between NATO allies in extreme conditions.

The U.S. Marines of the Marine Rotational Force Europe 21.1 (MRF-E), Marine Forces Europe and Africa and Norwegian soldiers, according to the press release, take part in a series of isolated vignettes that included a joint live-fire exercise on snow- and ice-covered ranges, and several elements that focused on defense capabilities.

The cold and wet conditions force the Marines and Norwegian partners to use snowshoes and cross-country skis to get around. They wrap white camouflage around their weapons, struggle to keep the ammunition dry and learn how to position their machine guns so they don’t sink into the powdery snow.

The bilateral exercise, which began on November 23, 2020, aims to improve the overall readiness of the collective forces to fight and win in extreme arctic and mountainous terrain, solidify relationships, and synchronize tactics, techniques and procedures.

“One of the most important lessons we have learned is that we need a mutual understanding of what the different military terms mean, so that when an order is given, we can both act in the same way,” said Major General Lars S. Lervik, chief of the Norwegian Army, and Brigader Pål E. Berglund, commander of Brigade North, Norwegian Army. “The level of integration allies have with the Norwegian Army today is very good, and I have never seen it this good before.”

The commanders also discussed the challenges their forces are overcoming through the arctic warfare exercise. Gordinier expressed appreciation for the unique training environment Norway offers the Camp Lejeune-based Marines.

“Norway has a benefit of arctic conditions and mountainous conditions that we can’t replicate at our home stations in America,” said Lt. Col. Ryan R. Gordinier, commander of Marine Rotational Force – Europe (MRF-E) 21.1, Marine Forces Europe and Africa. “In North Carolina, it is coastal swamp and it is very flat. Our Marines don’t have the experience of climbing up and down mountains. We don’t have the experience of living in snow. It is very important that we get a chance, as Marines from America, to get to experience the Arctic conditions that Norway provides, because of how important it is to our collective defense.”

MRF-E focuses on regional engagements throughout Europe by conducting various exercises, arctic cold-weather and mountain warfare training, and military-to-military engagements, which enhance overall interoperability of the U.S. Marine Corps with allies and partners.

“This exercise] demonstrates the strength of NATO,” said Gordinier. “Our responsibility is to make sure we do what we’ve promised to do: to protect our alliance. These interactions and these training events allow us to do that.”