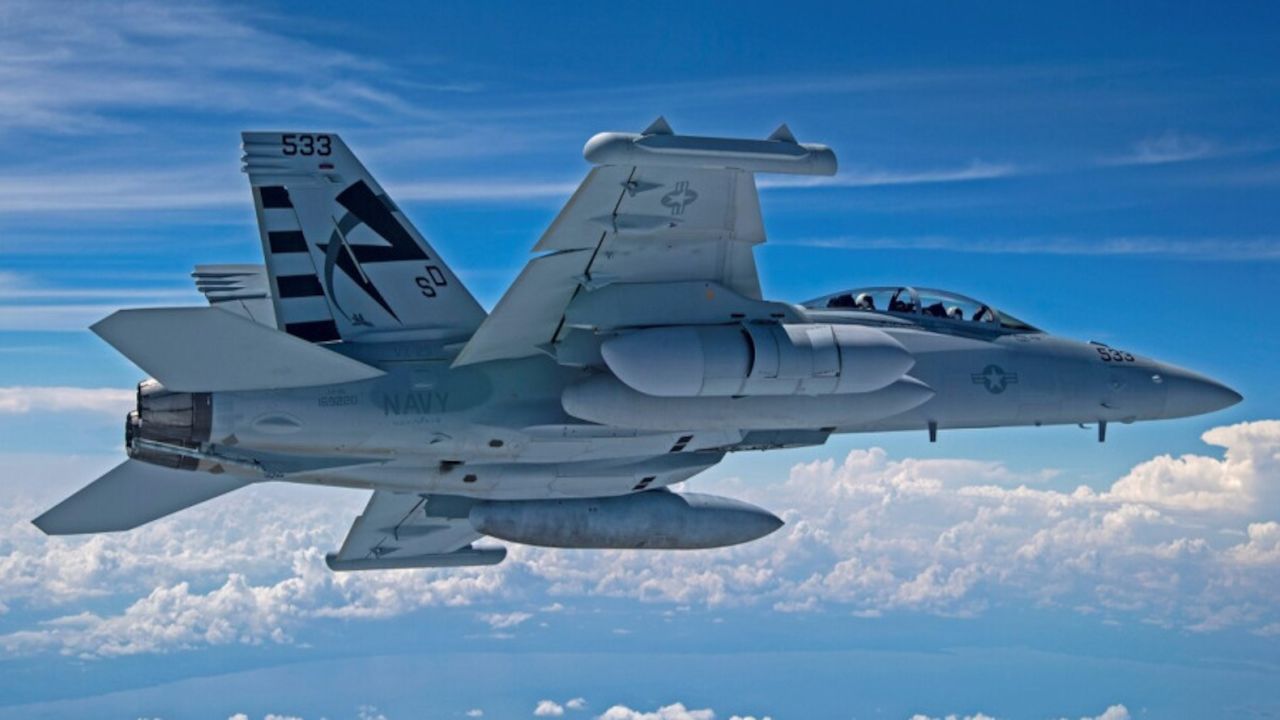 The U.S. Navy plans to blur the lines between traditional electronic warfare and cyber operations as it prepares to receive its new airborne electronic jammer, according to a top service official.

“Now with the ability to do phased array, advanced jamming techniques, we really start to blur the lines, I think, between what we would consider traditional jamming with cyberwarfare,” Rear Adm. John Meier, commander of Naval Air Force Atlantic, said April 13 during remarks at a virtual event hosted by the Association of Old Crows. “I think that the capabilities inherent in the jamming pod are going to open up a wide, wide array of not only jamming techniques, ranges, effective radiated power, but also taking us into other areas that we’ve never really had the ability to do before.”

Meier was talking about the Next Generation Jammer, the Navy’s — and by extension, the joint force’s — premier aerial electronic attack platform to be mounted on EA-18G Growlers aircraft. It is broken into three pods covering three portions of the electromagnetic spectrum: mid, low and high.

RF-enabled cyber is “becoming a bigger and bigger component of our cyber operations because more and more of our adversaries are getting smart and putting their systems on to wired networks that are firewalled off or independent from the internet so there’s not as many easy access points when you’re going up against China or Russia as there used to be,” Bryan Clark, a senior fellow and director of the Center for Defense Concepts and Technology at the Hudson Institute, told C4ISRNET. “They’re moving a lot of their stuff onto wired networks, so what happens is there’s a lot of interest in identifying new and innovative ways to get into opponents’ networks like the radar system that’s being used to feed information into their combat system or an electronic warfare jammer aperture that is normally supposed to be receiving signals to inform their EW system, that might be an access point for cyber effects.”

Traditionally, Clark said, electronic-attack and jamming capabilities were limited to pushing out a signal in the electromagnetic spectrum to deceive an enemy’s radar by either simulating a friendly system in the wrong location, simulating another radar or just blast so much noise within the spectrum that an adversary’s radar can’t reliably pick up a signal.

However, today’s systems are more digital, meaning electronic attack technology must be able to both jam those systems — which involves externally impacting radar by blasting out a signal to prevent the detection of friendly assets — and internally encoding software — which involves moving data through the electromagnetic spectrum to the system.

The Army has performed experiments in this field and created new tactical cyber units to conduct RF-enabled operations on the ground. For example, in training exercises, the service used RF-enabled techniques to gain access to closed circuit television cameras in cities ahead of a planned operation as a means of providing a commander advanced intelligence of what forces might encounter and the potential location of targets.

From the Navy’s perspective, the Next Generation Jammer will provide significantly more power, range and tasking ability than the legacy ALQ-99 jamming pod.

Meier lauded the power of the jammer, citing its phased array, digital-frequency jamming, multiple-beam capability and narrower-beams capability, which will allow forces to concentrate power at much greater distances in a more focused manner. This differs from the broader, more “megaphone”-like jamming of legacy capabilities; in other words, the jammer can better hone in on particular targets.

The first increment of the jammer — the mid-band, which was awarded to Raytheon in 2016 — is slated for initial operational capability in 2022. A Navy spokesperson said while Milestone C — the decision that will lead to procurement with low-rate initial production — was planned for early spring, it is rescheduled to late spring 2021 as a result of the COVID-19 pandemic. Low-rate initial production is scheduled to be awarded in early summer 2021.