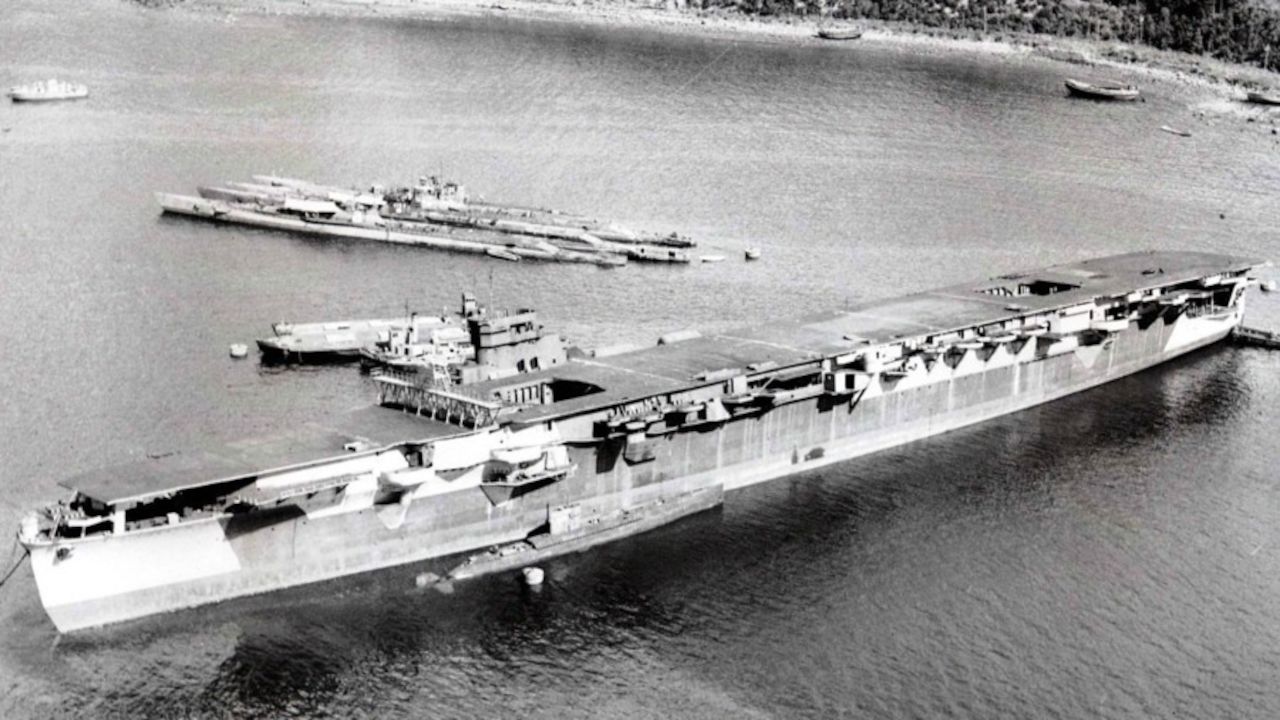 Japan’s ambitious plan to build aircraft carriers in wartime could not be supported by available resources.

Japan lacked the industrial strength needed to wage a war against the United States. Yet, Japanese military planners seldom considered the limitations to their nation’s construction capabilities. One example is the Imperial Japanese Navy’s June 30, 1942, plan for aircraft carrier construction. The loss of one light and four fleet carriers sunk and one badly damaged at the Battles of the Coral Sea and Mıdway had shocked naval planners. Warship construction in June 1942 was already minuscule, yet the Navy laid impossible goals on an industrial base patently incapable of meeting expectations.

At the time, Japan was constructing a single, keel-up, purpose-built aircraft carrier. Kawasaki had laid down Taiho on July 10, 1941; she was the only carrier laid down in 1941 and the only ship of her class. That same year, the United States laid down five Essex– class carriers. Taiho was the only nonconversion fleet carrier laid down from 1941 onward by the Japanese versus 24 U.S. Essex– and Midway-class carriers laid down in the same period. Taiho displaced 29,300 tons and was Japan’s only nonconversion, war-built fleet carrier that was similar to (actually bigger than) an Essex. The Japanese Navy commissioned Taiho on March 7, 1944.

Taiho exemplifies Japan’s industrial capabilities. She was the only nonconversion fleet carrier commissioned during the war against 17 U.S. purpose-built fleet carriers. Taiho took 32 months to complete. Essex, laid down less than three months before Taiho, was commissioned in just 20 months. The Japanese Navy ordered two improved Taiho designs in 1942 but then cancelled both. Another attempt, the June 30, 1942, effort, resulted in plans for five modified Taihos. The appearance of these ships in the order of battle was scheduled for 1947 (two ships) and 1948 (three ships), not an encouraging production program. They, too, were never laid down.

Regardless of actual performance, Japanese naval construction priorities in 1942 went to air strength, and that strength included aircraft carriers. There is quite a lead time in budgeting, planning for materials, and movement of materials to a shipyard before workers can lay a keel. It was not until late 1942 that Japan’s carrier program went into high gear, spurred by Midway and the June construction plan. Yards began the first three semi-fleet carriers of the new Unryu class. The keels of Unryu, Amagi, and Katsuragi were laid on August 1, October 1, and December 8, respectively.

With a standard displacement of about 17,150 tons, the Unryu-class carriers were based on the prewar, two-ship Hiryu class, with improvements. The Unryu class fell short of the capabilities of both an Essex that displaced 27,500 tons standard and below the Japanese carriers Shokaku and Zuikaku at 25,675 tons standard. Unryu-class carriers were similar in displacement to, but lighter than, the original Yorktown class of 19,872 tons. The Japanese did not really expect the Unryu class to perform as full-fledged fleet carriers; the Taiho class would do that. In accordance with Japan’s post-conquest strategic defensive posture, Unryu-class carriers would be the core of anticonvoy strike groups supported by cruisers and destroyers.

These three Unryu-class carriers were the first of a mass production run. The Japanese originally expected to build Unryu and 15 more, but then settled on Unryu and 13 more, for a total of 14. The Navy planned to complete two in calendar year 1944, five in 1945, four in 1946, two in 1947, and one in 1948. Nine or more would be under construction during peak production. The plan to construct 14 Unryu-class carriers counted on a number of assumptions. Shipyards needed steel from imported raw materials. Industrial power had to come from Home Island oil, hydroelectric, and coal. The training base had to produce trained pilots, sailors, and mechanics. Aircraft manufacturers had to produce carrier aircraft. Shipyards needed skilled labor, yard space (there had better not be too much repair work to interfere), and ship power plants. Once completed, the ships needed oil and escorts. As with so many Japanese assumptions, all these failed to materialize.

Too Many Carriers, Too Few Escorts

The June 30 plan for 14 Unryu-class carriers suffered from a serious lack of reality. If planners really expected to build so many, completely excluding the demands of constructing ships of the Taiho class (one Taiho under production and five more planned), they needed 2.5 destroyers and 1.2 cruisers per carrier as escorts. Those ratios are based on the destroyer and cruiser escorts used per carrier at Pearl Harbor, Rabaul/Kavieng, Darwin, Indian Ocean, Coral Sea, Midway, the Aleutians, Eastern Solomons, Santa Cruz, the Attu response of May 1943, and the September and October 1943 Eniwetok sorties.

A balanced 14-ship Unryu-class plan meant that the Imperial Japanese Navy needed 35 new destroyers and 17 new cruisers to arrive with the carriers from 1944 through 1947, all in addition to normal construction, to make good wartime losses. If one were to delete the unusually large cruiser and destroyer forces of May, September, and October 1943, and count only 1941-1942 averages, the Navy still would have needed 30 destroyers and 12 cruisers. During the entire war, Japan commissioned 31 destroyers, while the United States commissioned 365. The Japanese commissioned five light cruisers and no heavy cruisers, while the United States commissioned 46 large, heavy, and light cruisers.

In defense of the 14-ship Unryu plan, the Japanese might have assumed that existing escorts could protect the new carriers. As of June 30, 1942, the Navy had suffered few escort losses: only nine destroyers sunk and one converted to a target ship. They had accepted five from new construction, a net loss of five. Another nine were in port undergoing battle damage repair. Future destroyer production did not look good, just 11 over the next 12 months. The June 30 cruiser status looked better than destroyers, only one of 18 heavy cruisers lost, and none of the 17 light cruisers sunk. One of each was out of action for battle damage repair. Like destroyers, cruiser production forecasts for the next 12 months were very low, no heavies and just three light.

The first Unryu-class carriers could have used the escorts that had supported Coral Sea’s Shoho and Midway’s Akagi, Kaga, Soryu, and Hiryu. Escorts that had in 1941 and 1942 protected transport units, invasion forces, and occupation forces might be available in 1944 and later. Planners had to assume that those destroyers and cruisers were still afloat in 1944 when the first Unryu-class carriers appeared. One might also assume that more carriers would be sunk and under repair than escorts, such as Shokaku, damaged twice in 1942 and drydocked 20 weeks that year and 11 weeks into 1943. Therefore, escorts could shuffle between active carriers. All this assumed few escort losses, a very risky assumption indeed.

Planners briefly considered converting 13 heavy cruisers to light aircraft carriers. That would have removed them from the escort force and increased the need for new cruiser construction. Regardless of these possibilities, escort assumptions and strength both collapsed in late 1942 during the New Guinea and Solomons campaigns. By the time the Navy commissioned Unryu on August 6, 1944, the destroyer fleet had lost 56 ships, leaving them at 46 percent of their December 8, 1941, destroyer strength, including destroyers over 1,200 tons and not counting new Matsu-class destroyer escorts.

To overcome carrier engine production shortfalls and a lack of suitable power plants, the Japanese had to use turbines that had been built for canceled ships. The Navy turned to cruiser machinery for the Unryu class: engines developed for Mogami-class heavy cruisers. There were problems with this substitution. A shortage of parts even for cruiser engines meant that the third and fifth Unryu-class carriers ended up with destroyer turbines. Both ships thereby lost one-third of their planned power, and their maximum speed dropped by two knots. Where the Navy could have acquired power plants for five more Taiho-class carriers and the remaining Unryu-class carriers is a good question.

The Navy commissioned the Unryu, Amagi, and Katsuragi in the fall of 1944, too late to be of any use. Unryu did sortie on a logistics transport mission in December only to be torpedoed and sunk. The seventh, eighth, and ninth Essex-class carriers, Hornet, Franklin, and Bennington, were laid down on August 3, December 7, and December 15, respectively, dates similar to the first three Unryu-class carriers. The Japanese required 24, 22, and 22 months to lay down, launch, and commission Unryu, Amagi, and Katsuragi. The United States took 16, 16, and 20 months for Hornet, Franklin, and Bennington, each of which displaced 63 percent more than an Unryu.

So, from mid-1942 to early 1944, Japan could bring into service only three fleet carriers, Junyo, Hiyo, and Taiho, all laid down before war began, the first two of which were conversions from ocean liners rather than purpose-built. Shipyards laid down or converted more carriers, launched them, and commissioned them during the war. For example, the light carriers Chitose and Chiyoda were converted from seaplane carriers, but all too late. Japan built no light or escort carriers from the keel up during the war.

There is more to building an aircraft carrier than shipbuilding. Early in 1943, the military realized it had to drastically expand pilot training to a level three times the current structure. The Japanese wanted to do three things: increase the numbers of replacements going to units engaged in combat, build up the training base, and accumulate a reserve of pilots for future operations.

A second part of the pilot requirement came from plans to activate the First Air Fleet of over 1,600 authorized aircraft with two air flotillas, the 61st and the 62nd. A third part of the requirement came from simply maintaining the current strength of land- and carrier-based air groups as well as pilots for seaplane carriers and light and heavy cruisers. In mid-1942, the pilot training program might have looked achievable. No new fleet carriers were expected to come on line until 1944 with Taiho. But no one had foreseen the severity of pilot losses soon to come.

Most of these training air groups operated from 52 bases in Japan, while two bases were in the Philippines, five bases on Formosa, and five bases in the Singapore area. The critical bottleneck in training pilots and crewmen was inadequate training equipment. Training bases had low priority for the issuing of Japan’s limited number of aircraft.

Instructors had too many students to manage them effectively. The urgency to train pilots overwhelmed the curriculum. Veteran naval ace Saburo Sakai recalled in early 1943, “We couldn’t watch for individual errors and take the long hours necessary to weed the faults out of a trainee.” The decision to press for quantity over quality meant that poorly trained fliers graduated to combat units. “We were told to rush men through, to forget the fine points, just teach them how to fly and shoot.”

Thus, aside from the problems of actually building aircraft carriers in the numbers projected, the Japanese could never have built escorts or trained enough fliers, mechanics, and armorers to operate with them. The last gasp of naval air power afloat occurred in June 1944, at the Battle of the Philippine Sea, before the first of the Unryu-class carriers was commissioned.

Production Grinds to a Halt

The Japanese war effort was so unbalanced and so crippled by industrial and managerial weaknesses that the June 30, 1942, aircraft carrier plan was little more than a feverish reaction to Coral Sea and Midway. The fever would ultimately break. The five-Taiho program was cancelled. The 14-Unryu program ground to a halt after six hulls had been laid and launched, three ships commissioned, and one of those three deployed as a transport.