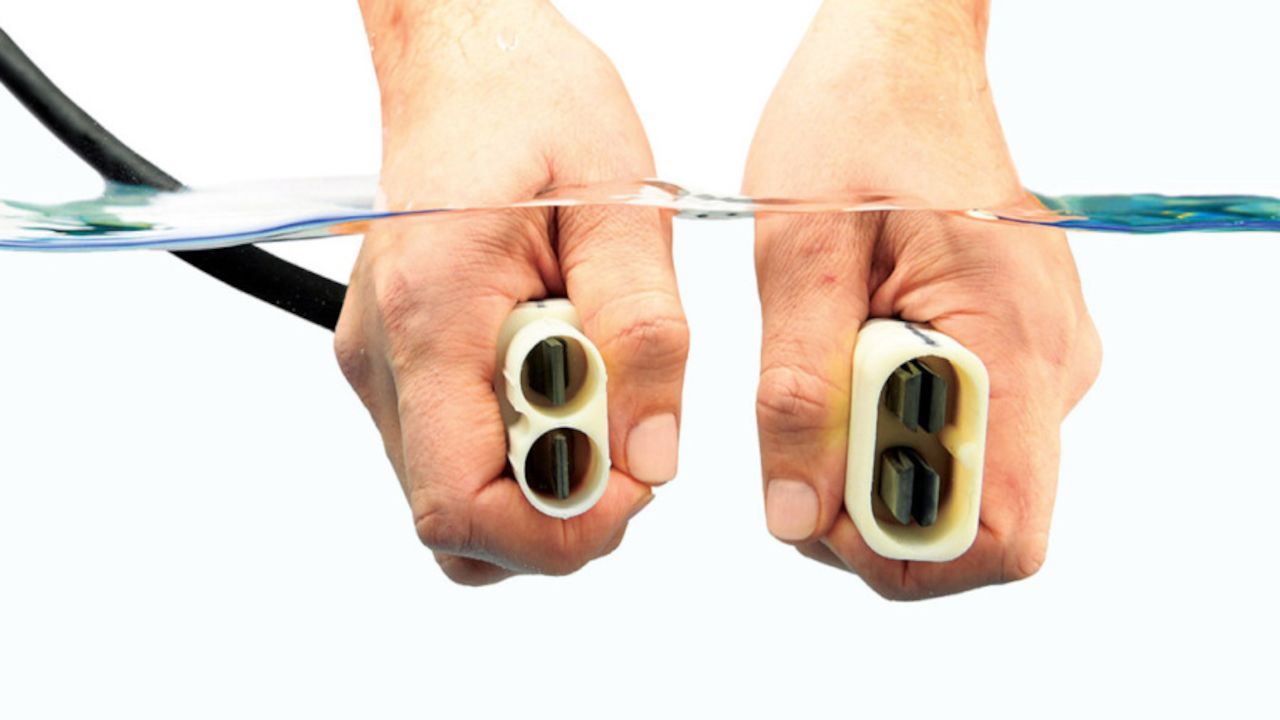 “Other connectors try to fight the sea; ours works in harmony with it.” — Jim Windgassen, Northrop Grumman Senior Staff Engineer.

We've all heard it: Water and electricity don't mix.

The saying concerns safety, with stories of bathtubs and toasters offering up dire warnings and potentially shocking consequences. But this creates a power paradox — it's not that water and electricity don't mix, it's that they mix too well.

Traditional underwater connectors defend against the inherent properties of aqueous electrolytes such as seawater by introducing insulating materials and mechanisms. The problem is that they're add-ons, not fundamental features. Over time, oils must be reapplied to consistently repel water, while rubber seals must be replaced before they crack or break. Moving parts can wear over time, which, combined with the close tolerances involved, can eventually lead to improper operation.

Staff engineer Jim Windgassen and Northrop Grumman Fellow Harvey Hack were hard at work on improving the ability of UUVs to recharge their batteries when they discovered the missing piece of this puzzle: the inherent nature of niobium.

Niobium is a transition metal first identified in 1801 by English chemist Charles Hatchett. Originally called columbium, it shares many physical properties with another element called tantalum, which is directly below niobium in the periodic table. In fact, the two elements were thought to be the same until their valence states were identified and eventually columbium was renamed niobium — for the mythological Niobe, daughter of Tantalus — to show their close relationship.

Windgassen, an electrical engineer, had been considering the UUV charging problem and was considering a somewhat different solution when he came to see his friend, Harvey Hack, a renowned metallurgist who had previously used niobium metal for its extreme corrosion resistance in a different connector design.  Hack’s mention of niobium reminded Windgassen of how tantalum capacitors, a common type of electronic component work, and that the same physics the tantalum capacitor uses to function could possibly be leveraged towards making a new type of underwater electrical connector.  The two collaborated on a niobium-based connector for UUV battery recharging but quickly realized its potential to solve both sides of the power-meets-water problem: corrosion and contact.

The game-changing characteristic? A passive film. “Although that film is only a couple of molecules thick, the film prevents any current from leaving the contact and going into the water,” says Hack. “Even with applied voltages that would destroy traditional contact materials.”

When submerged in water, niobium “grows” a 150 nanometer-thick insulation layer that both prevents electricity from escaping into the water and also keeps the connector contacts corrosion-free. When mated, metal connector contacts locally disrupt this film by scraping against each other to create a secure electrical link. Upon de-mating, exposure to water causes the film to re-form in milliseconds, making NiobiCon™ connectors safe to use for any wet-environment application.

Creation of NiobiCon™ technology didn't happen in isolation. While Windgassen and Hack developed the initial idea, they quickly looped in a mechanical engineering colleague, Jeff Matejka, staff engineer, to help create their original prototype device. Before long, a small team of Northrop Grumman engineers was working in tandem and designing a novel solution that worked with water — instead of against it — to provide a simple, efficient, and intrinsically safe means to make electrical connections underwater.

Hack puts it simply: “Without this large group of people, the concept would not be developed to this point.” Ultimately, this collaboration comes down to culture: Northrop Grumman encourages experts to reach out across the enterprise and discover what's happening in other departments. Underpinned by the aptly-named SPARK program, the organization encourages staff to think outside the box, propose innovative new ideas and develop new concepts.