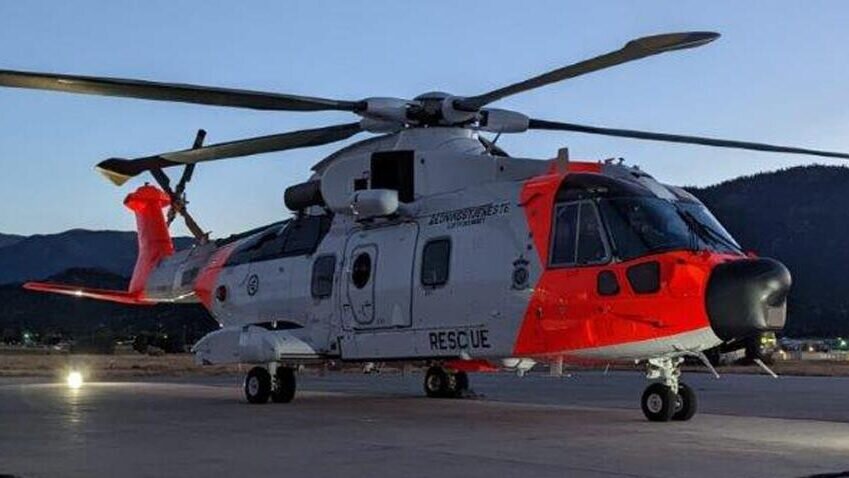 The Norwegian AW101 All-Weather Search and Rescue helicopter (NAWSARH), built by Leonardo, undertook trials in the United States to demonstrate the AW101 take-off and landing capability at high altitude.

The aircraft then successfully completed an epic journey across the North Atlantic to return to the UK across mountains, high seas, storm clouds, ice, and snow.

The high altitude trials took place over a one-month period in Q3-Q4 2022, from the aircraft’s arrival in Baltimore, US, through to the trials in Colorado; the NAWSARH’s transit back to Leonardo in Yeovil was via Canada, Greenland, and Iceland. During that time, the aircraft flew nearly 80 hours, with minimal unplanned maintenance, this included transit from Baltimore to Buena Vista, the high-altitude trial, and the return trip to the UK.

Due to the challenges faced post-Covid with the worldwide shipping schedule, it was determined that the aircraft would be flown back to the UK from the USA, for imminent delivery to the Norwegian customer. Drawing on Leonardo’s experience of aircraft delivery from Europe to Canada, the return flight post-trials was known to be achievable. For instance, on 11 October 2001, the AW101/CH-149 Cormorant for the Royal Canadian Air Force had flown from Italy, via England, to Canada over a course of nine-days covering 11,400km/6,155nm.

The latest AW101s are fully IFR (Instrument Flight Rules) capable with a fully integrated Flight Management System and digital AFCS (Automatic Flight Control System) that enable long distance routes to be flown easily. For example, the DAFCS provides the crew with a capability to pre-select altitudes, speed, and ‘couple’ the AFCS to the FMS navigation. This capability enhances safety by allowing the crew more capacity to focus on route planning, weather, and flight management. The five-tank fuel system enabled long-range flight to be achieved even without the optional extra ferry tank fitted. The fuel system meant that the crew had the security to fly long haul with fuel reserves that could be used if required.

The aircrew comprised of Test Pilots Matt Grindon and Miles Barnett with Flight Test Engineer Lead, Richard Parkes. Richard commented on some of the obstacles to overcome in the lead-up to the return flight: “The real challenges were in the flight planning and preparation. Locating suitable sites to refuel, overnight stays, Customs and Immigration, and the logistic support for the transit were the real tests and took many hours of phone calls, emails to remote locations, weather checks and fuel calculations to enable the trip to be accomplished all in a very short timescale.”
He explained how the team spent many long hours refining the route, confirming fuel availability and border crossing protocols with each country. The aircraft was carefully prepared with the Rotor Ice Protection and other anti-icing systems checked out in the days before departure.

Rotor Ice Protection provides heating along the leading edge of the rotor blade to prevent the accretion of ice during flight in icing conditions. In order to operate safely in icing conditions, these critical areas of the aircraft require protection from the detrimental effect that ice build-up may have on the journey.
This capability allowed the crew to ensure a safe mission in known icing conditions; conditions which could confine other helicopters to the ground for long periods waiting for the weather to change or force them to take a much longer route to circumnavigate icing conditions.

Over the duration of seven days, the aircraft flew to six countries, stopped at 12 airports and covered 4,800 nm/8,889 km. The route taken from Buena Vista was broken into two 3-4 hour segments per day, with fuel stops taking place in between.

The aircraft’s sensor suite was instrumental in reducing crew workload and confirming the aircraft was on a safe flight path. The radar system ensured safe separation from coast and icebergs; the EO was used in its various modes for long-range identification of airfields and runways, and the synthetic vision system. This combined with the range of other information on the cockpit’s five large display units constantly reassured the crew that things were going as planned. The on board performance sub-system allowed the crew to check that they always had sufficient fuel and allowed various weather scenarios to be pre-planned for in case the weather changed.

Richard commented: “On one occasion refuelling took place in a remote Canadian airfield, where we were met by an Inuit refuelling team in 30 kt wind. Later, we emptied the whole contents of the refuel bowser in Nuuk and Kulusuk, Greenland, which were memorable experiences. Airport staff were constantly amazed that a helicopter was capable of reaching their location and had the range and equipment to complete such a flight.”

The AW101 NAWSARH crew flew over the picturesque Greenland ice fields and coast, and along glacial fiords, which are so rarely seen, from the sky. From Baltimore through to the arrival home in Yeovil, the aircraft needed minimal servicing and performed flawlessly in diverse flight conditions from +23°C temperatures at Buena Vista, to -14°C over the mountains in Greenland, and icing conditions over the Atlantic Ocean.

The rotor anti-icing and other safety and sensor systems provided game changing capability for flying through freezing cloud conditions on long over-sea legs that gave the crew confidence in the high level of safety that this aircraft brings. The capability of the real time performance calculations and accurate navigation systems all combined to provide a high level of confidence in the aircraft’s ability to be a truly all-weather helicopter.

Leonardo showcases its solutions and technologies at CANSEC
Leonardo