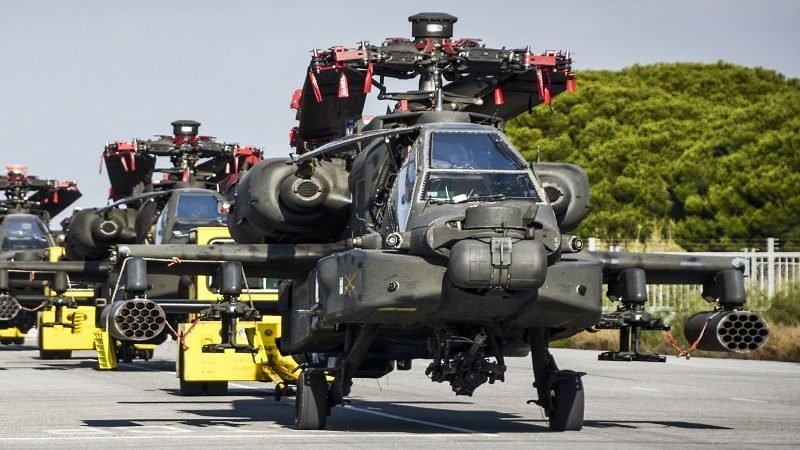 Boeing and the Ministry of Defence (MOD) have signed an agreement for Boeing to provide long-term training, support and sustainment for the British Army’s new fleet of 50 Apache AH-64E helicopters.

The announcement was made by Minster for Defence Procurement, Jeremy Quin MP, as he visited Wattisham Flying Station to see the Apache AH-64E.

“There can be no doubt these impressive Apache helicopters will help the Army sustain its battle-winning capabilities in future operations”, said Defence Procurement Minister, Jeremy Quin. “In addition to its vital defence purpose, this cutting-edge technology will create and support hundreds of UK jobs.”

Under the new $348 million Long Term Training and Support Services (LTTSS) contract, Boeing will work closely with the British Army to provide maintenance and engineering support, supply chain and logistics management at Wattisham. Boeing will also deliver aircrew and maintainer training from its advanced facility at Middle Wallop.

The new agreement, which will run until 2040, will create more than 200 jobs in the UK during the initial four-years, including more than 165 at Army Aviation Centre Middle Wallop and 45 at Wattisham Flying Station, plus dozens more with suppliers in the UK. Boeing already has more than 40 employees working alongside Army Air Corps personnel providing training for the Mk1 Apache.

In addition to the new Boeing roles, the training and support for the new Apache model will bring new roles and opportunities for Boeing’s UK supply chain. Yeovil-based Kuehne & Nagel will provide a Warehouse Management service at Wattisham with a dispersed store at Middle Wallop, creating 45 new jobs. H&S Aviation will carry out the repair and overhaul of the engines in Portsmouth, under subcontract to GE Aviation.

The AH-64E is the most advanced variant of the Apache. It is designed and equipped with an open systems architecture, including the latest communications, navigation, sensor and weapon systems. It also features advanced digital connectivity, a Joint Tactical Information Distribution System, capability to control unmanned aerial vehicles (UAVs) and new composite main rotor blades. With 14 of the new variant already in the UK, the new Apache AH-64E fleet will grow to 50, with deliveries expected to be completed in 2024.

“We are proud to deliver the necessary support needed to ensure mission readiness and optimise the full capability of the AH-64E Apache fleet, which will provide a significant uplift in capability to the British Army,” said Anna Keeling, managing director of Boeing Defence UK. “The new Apaches join the Poseidon fleet at RAF Lossiemouth, the Wedgetail modification work in Birmingham, Chinooks undergoing major upgrades across Hampshire, and the C-17s at RAF Brize Norton underpinning the UK’s strategic airlift capability – all Boeing platforms, serving the UK’s armed forces and providing economic benefits up and down the country.”

Two of three Longbow Crew Trainer simulated devices for the E model are already in the UK. The first was declared “ready for training” at the end of 2020 and the second is undergoing testing and installation. The third and final is scheduled to be delivered in 2022. Situated with front-line Army Air Corps Apache squadrons, the devices will play a key role in transitioning the crews to the new variant.