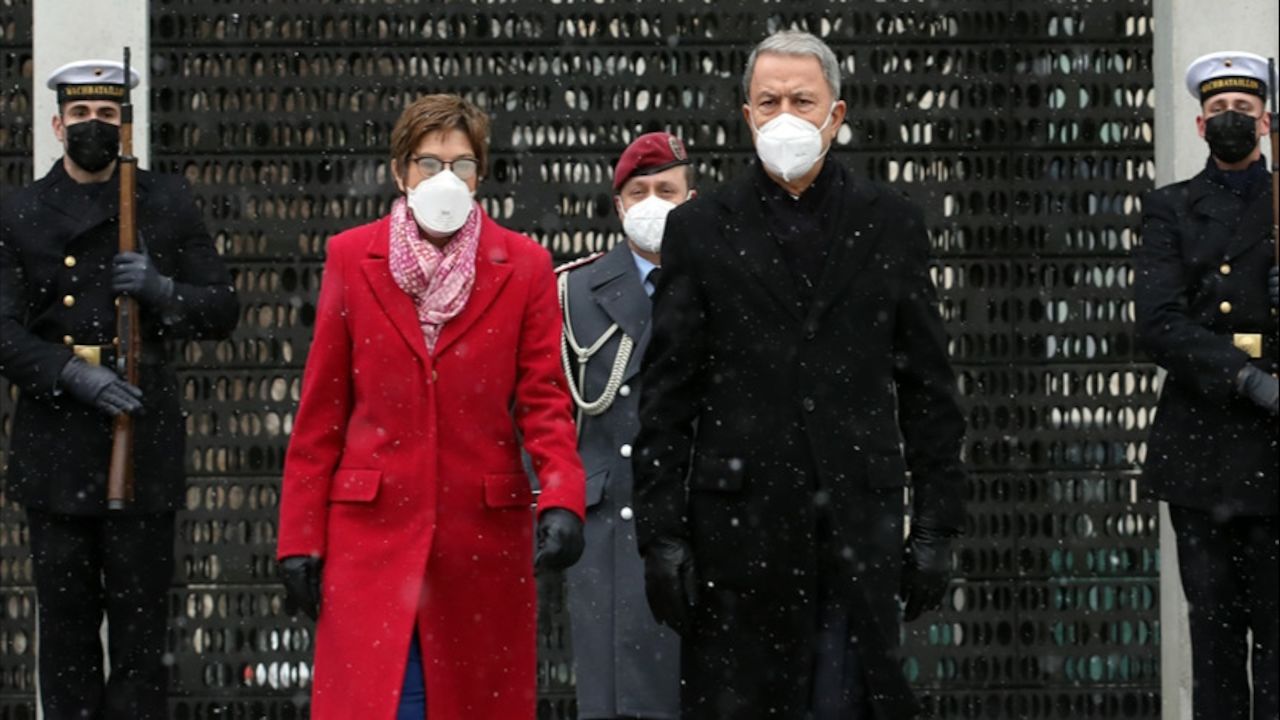 Turkey is an important NATO ally, the German defense minister said on Tuesday, following a meeting with her Turkish counterpart Hulusi Akar in the capital Berlin.

Akar and his delegation were greeted with military honors by Annegret Kramp-Karrenbauer at the headquarters of the German Ministry of Defence, where the two ministers discussed various aspects of bilateral defense cooperation, international security issues, and the recent developments in the Eastern Mediterranean.

“Turkey is, and will remain, an important NATO partner,” Kramp-Karrenbauer said after the talks, adding that today’s meeting can be interpreted as “a special, and a good signal” for the allies.

She underlined that Turkey has always been a reliable and close partner, and made significant contributions to Europe’s security.

“Both countries have a shared interest in maintaining stability in the southeastern flank of the NATO,” she stressed.

Akar, for his part, thanked his German counterpart for her hospitality and said they had very frank and constructive discussions on a number of important topics.

“We have had the opportunity to discuss a wide range of issues, both bilateral topics, and security and defense matters within the framework of NATO and the EU,” he said.

Akar’s visit came after the resumption of direct talks between Turkey and Greece on Jan. 25, following Germany’s diplomatic efforts to de-escalate tensions in the Eastern Mediterranean.

Kramp-Karrenbauer has welcomed the recent talks between Ankara and Athens, and expressed hope that this process would help finding diplomatic solutions to the long-standing problems between the two NATO allies.

“I hope that all sides would use this opportunity for dialogue, I see Germany here in a mediating role,” she said.

The German government has taken several initiatives in recent months to reduce tensions between Turkey and Greece, and facilitated the resumption of direct talks after a four-year hiatus.

Turkey and Greece have long been at odds over the maritime boundaries in the Aegean and the Eastern Mediterranean.

Ankara has rejected maritime boundary claims of EU members Greece and the Greek Cypriot administration, and stressed that these excessive claims violate the sovereign rights of both Turkey and the Turkish Cypriots.

Last year, the Turkish government had sent several drill ships in the Eastern Mediterranean to explore for energy resources, asserting Turkey’s rights in the region as well as those of the Turkish Republic of Northern Cyprus.

Turkish leaders have repeatedly said the problems in the Aegean and the Eastern Mediterranean should be resolved through peaceful means and dialogue, but also underlined that Turkey has the will and determination to protect its rights and interests arising from international law and agreements.