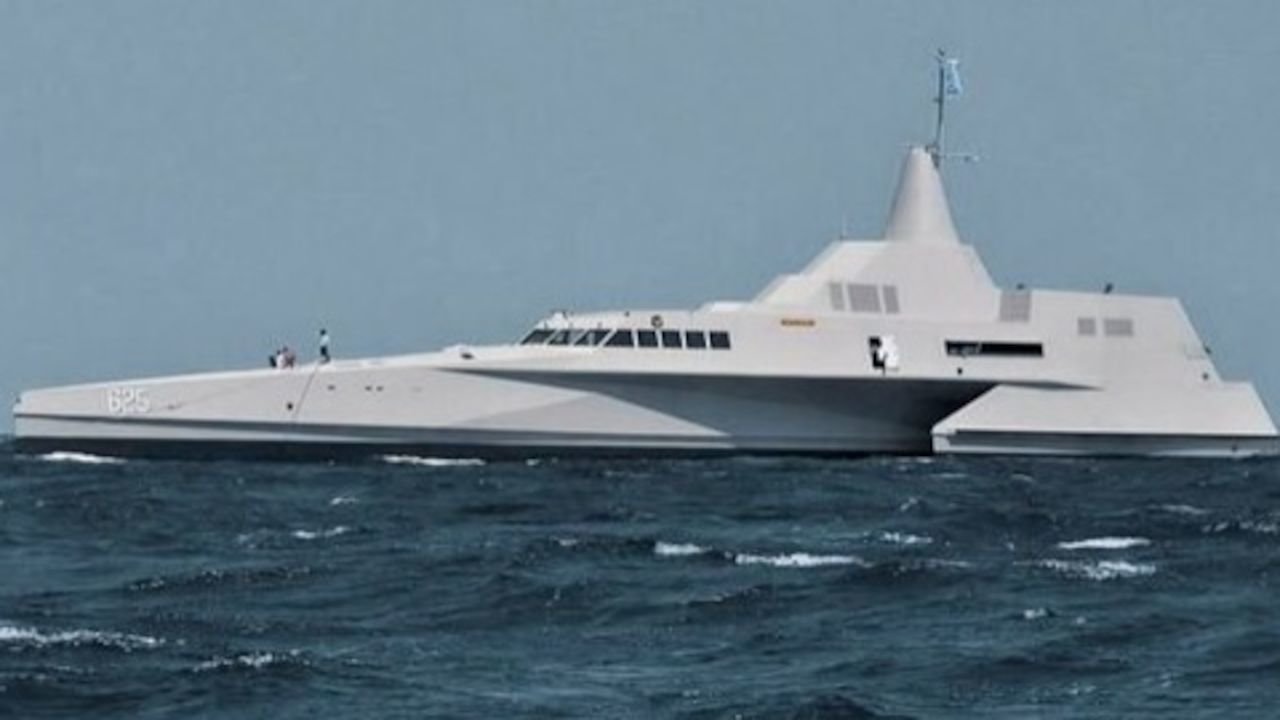 Indonesian shipbuilder PT Lundin (also known as North Sea Boats) today launched a new Fast Attack Craft Trimaran for the Indonesian Navy (TNI AL). KRI Golok (688) was named during an official ceremony at the shipyard in Banyuwangi (East Java) in presence of the Chief of Staff of the Navy, Admiral Yudo Margono.

During the ceremony, Admiral Margono said that the Trimaran was the first ship made of composite material which has the advantages of high specific strength, lighter weight, and has excellent fatigue resistance and corrosion resistance. Therefore, this ship can be used as a prototype trimaran ship, for development purpose.

“The philosophical meaning of naming this ship is that KRI Golok-688 should be used to carry out any given operational task, both Military Operations for War (MOOW) and Military operations other than war (MOOTW). With its high speed and high destructive power, it is hoped that this ship will be able to carry out the hit and run fast missile boat tactic,”

In addition, Admiral Margono revealed that the construction of the Trimaran ship certainly has a very strategic meaning: PT. Lundin Industry Invest is one of the national defense industries that has succeeded in developing defense industry technology for the national interest, in an effort to reduce dependence on other countries regarding the procurement of the Indonesian Navy’s equipment in the future.

According to PT Lundin:

The Fast Attack Craft (FAC) employs a modern “Wave Piercing” trimaran design. This allows the vessel to cut-through waves rather than rise up and over them, and the increased beam provides inherent stability. This combination of features reduces both pitching and rolling, creating a stable weapons platform, and enabling the vessel to comfortably and safely maintain higher average speeds in adverse conditions. The FAC has “Stealth” design characteristics, and incorporate features that minimise detection by reducing Radar, Infra-Red, Acoustic and Magnetic signatures. Stealth properties are further improved as there are no reverse-angle bow overhangs to reflect radar signals, as seen on conventional hull forms. Weaponry, including missiles and naval guns, and the ships 11 m high-speed RHIB, are discreetly concealed or shaped to meld into the superstructure profile.

KRI Golok (688) is the second vessel of the “X3K” type built by PT Lundin. The first one, KRI Klewang, was launched in August 2012. However the first-in-class ship was destroyed a month later, following a fire that broke out during fitting out. Earlier this year, the shipbuilder launched and started sea trials of another unique design: the X18 Combat Boat also known as “Tank Boat”.