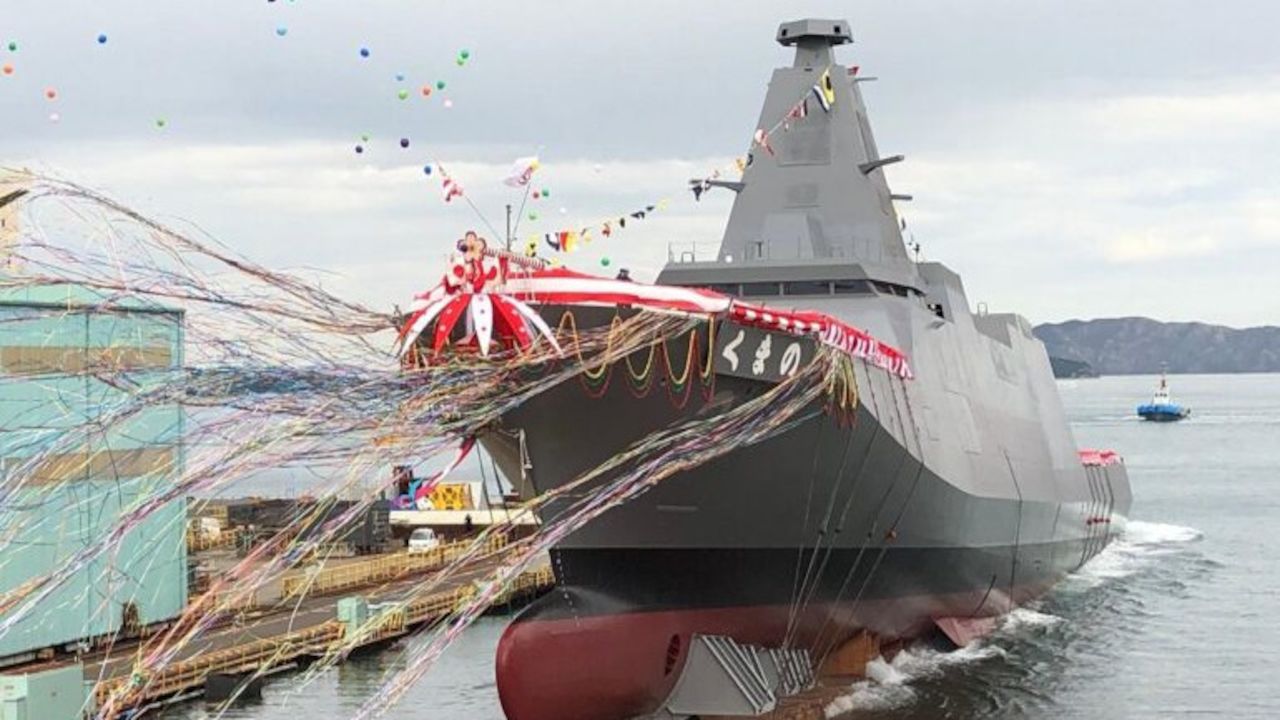 “Kumano” くまの」is actually the second vessel of the series. The first-in-class ship is still under construction at Mitsubishi Heavy Industries (MHI) in Nagasaki.

Mitsui E&S has received a subcontracting order from MHI for the construction of the 3,900-ton frigate for the JMSDF. It is the company’s 2050th ship.

The vessel is named after the Kumanbo river in the Kii Peninsula of central Japan, located in Nara, Wakayama and Mie Prefectures. The shipyard will now proceed to the fitting out stage of the frigate, ahead of its delivery set for 2021.

First steel cutting of the first 30FFM took place in September 2019 at MHI Nagasaki shipyard, and second one in October 2019 at Mitsui E&S Tamano shipyard. Atsui Yoshioka, Senior Project Manager of the Next Generation Surface Ship Project at MHI previously told Naval News in January 2020 (before the COVID-19 crisis) that the launch of the first hull was set for November this year while delivery of the first frigate to the JMSDF was set for March 2022. It seems like these dates have move by a couple of months (as is the case with most shipbuilding projects around the world) because of the pandemic.

In addition, this ship design is the first major surface combatant that Japan (via MHI) is actively promoting for export. OPV and Destroyer variants based on 30FFM were unveiled during PACIFIC 2019 last year in Australia. There have been recent rumors about export of 30FFM to Indonesia.

The 30 FFM will increase the current number of vessels in the JMSDF as well as replace older vessels that have been responsible for coastal defense and minesweeping. So it is designed for a very wide range of missions.

The main mission of the 30 FFM in peacetime will be to patrol the waters around Japan. Currently, this is a mission of older destroyer (Abukuma, Hatsuyuki and Asagiri class), but the 30FFM will take over this mission by replacing these vessels.

As explained later, the 30FFM is equipped with Mk.45 mod.4 5-inch gun and is also given a minesweeping/mine-laying capability. Therefore, it can be inferred that the 30FFM is also useful for island defense.

The Mk.45 is ideal for attacking enemies that have landed on the island. Also, in order to land friendly troops, it is necessary to sweep the mines laid by the enemy.In addition, laying mines to deter enemy landings is also useful.

Currently, JMSDF continues to send destroyers to work with countries around the world to deter piracy off the coast of Somalia, Africa. However, this activity has become a huge burden for JMSDF, especially because of the North Korean situation and the increased duties of the JMSDF in the wake of China’s maritime expansion. Therefore, it is intended to send the 30 FFM to these international contributions overseas and to dedicate the destroyer to missions against China and North Korea.

The 30FFM will be equipped with a wide variety of weapons and systems as listed below.

According to MHI, the 30FFM multi-mission frigate will have a full load displacement of about 5,500 tons, with a length of 132.5 meters and a beam of 16.3 meters. It will have a maximum speed in excess of 30 knots. The crew complement will be quite low, at about 90 sailors, indicating a high level of automation on board.

Atsui Yoshioka, Senior Project Manager of the Next Generation Surface Ship Project at MHI previously told Naval News at Sea Air Space 2019 that the main requirements that drove the design of this future ship are:

To achieve such as high speed (over 30 knots), the frigate will be fitted with a CODAG propulsion system consisting in a single Rolls Royce MT-30 gaz turbine and two MAN 12V28/33D diesel engines. Early designs of the frigate showed a combination of waterjet and propellers but the newer scale model (unveiled at SAS 2018 and showcased at various trade shows ever since) doesn’t show the underside of the hull anymore.