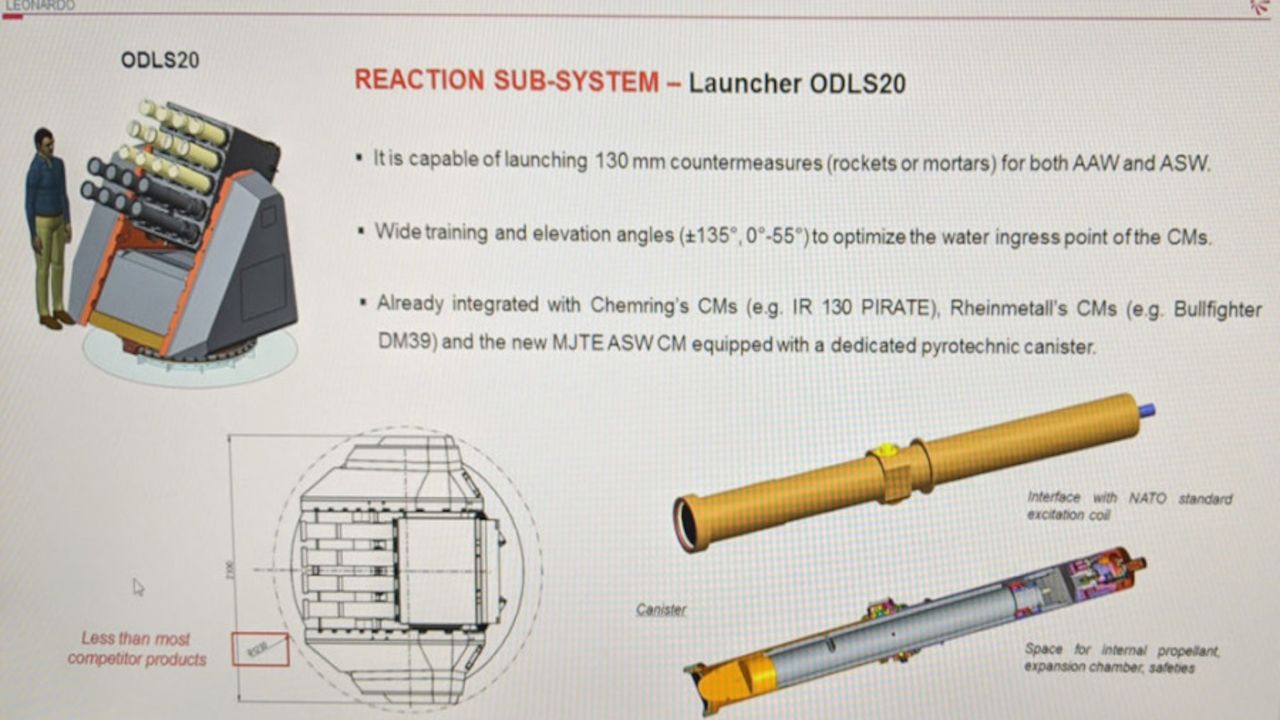 In a press release by Leonardo the company announced that it has signed a strategic agreement with LACROIX which will see the partners working together to develop and integrate solutions in the naval countermeasures sector. The collaboration, which will look towards new technologies as well as new business opportunities, initially provides for the creation of the SYLENA Mk2/MJTE solution. This will see LACROIX's SYLENA MK2 DLS (Decoy Launching System) integrated with Leonardo's MJTE (Mobile Jammer Target Emulator) anti-torpedo countermeasures.

The MJTE is Leonardo's latest-generation torpedo jamming solution. It can emulate the signature and acoustics of its host platform and emit a powerful jamming signal to create convincing false targets, allowing the targeted vessel to perform an effective evasive manoeuvre. Compared to other solutions on the market, the new MJTE packs a number of protective techniques into a low cost unit and performs effectively at short range.

The MJTE is part of Leonardo's new anti-torpedo suite, which includes the towed Black Snake sonar, the new OTO Decoy Launching System 20 (ODLS20) and the company’s software package which calculates optimum release timing for countermeasures and escape routes for the host vessel.

The cooperation agreement between Leonardo and LACROIX will expand the accessible market for both the MJTE countermeasure and the SYLENA MK2 launch system. The compact and lightweight form factor of the SYLENA MK2 makes it suitable for small and medium-sized vessels, expanding the potential user base for the MJTE.

There is clear synergy in this partnership with LACROIX as together we can offer a sophisticated anti-submarine countermeasure solution, even for platforms with limited space. These require compact and lightweight launch systems which can simultaneously deliver Anti-Air Warfare and Anti-Submarine capabilities".

Leonardo is committed to securing and protecting people and communities around the world through its leadership in next generation technologies. Collaboration within industry, with government and between individuals to offer superior security capabilities is part of its 'Be Tomorrow - Leonardo 2030' strategic plan.

François MOULINIER, COO of LACROIX Defense said: “Following the work we have undertaken with Leonardo to integrate SYLENA within their Athena-C combat management system as part of ongoing contracts, this collaboration is a natural next step in the development of joint solutions. Leonardo is a major player in the European Industrial and Technological Defense Base (BITD) and this partnership proves the maturity of our solutions and the unmatched modularity and versatility of our range of systems.”

Following its customers’ requests, LACROIX has developed, since 2012, a range of new generation Decoy Launching Systems (DLS) to protect and significantly increase vessel survivability ratio, from patrol boats operating the SYLENA® Lightweight to destroyers operating the SYLENA® MK1 and MK2. SYLENA® launchers are capable of employing the latest generation of SEACLAD® ammunition, corner reflectors and IR decoys as well as ASW solutions with the SEALAT dedicated to the SYLENA® MK2.

The SYLENA® MK2 DLS, which is the first “in-service” static anti-missile system in the world operating both corner reflectors (SEALEM) and anti-torpedo countermeasures, maximizes vessel protection with a highly reliable system at a low operating cost.
The fact that the SYLENA® DLS static launcher fires only mortars without any pneumatic constraints and has a low footprint on deck along with a low recoil force allows for limited acquisition and integration costs. Therefore the system has already convinced numerous navies to either retrofit or fit out their vessels.