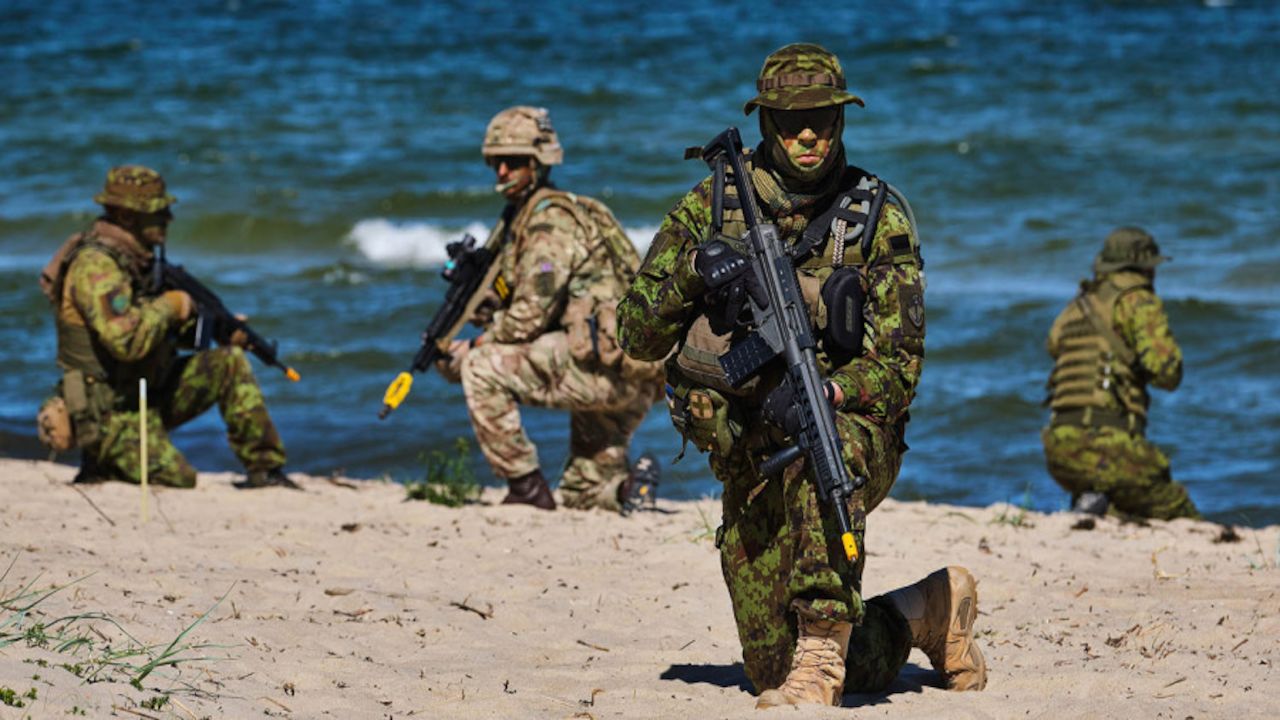 The United Kingdom's Royal Navy announced that the Royal Marines are heading to the Baltic for training missions with Lithuanian forces to share expertise.

It is familiar ground for the marines of 45 Commando who have returned to the Baltic two years after their last mission there to work alongside NATO allies and partners in the region as part of Littoral Response Group (North), which puts UK commando forces in forward positions alongside amphibious ships HMS Albion and RFA Mounts Bay.

The Lithuanian Griffin Brigade visited Scotland in 2019 to gain experience from the Arbroath-based commandos on the ranges at Barry Buddon.

Now, the Griffin Brigade – a motorised infantry brigade of the Lithuanian Army – are hosting 45 Commando at their base in the port city of Klaipėda alongside the National Defence Volunteer Force.

There, the commandos – more than 130 of them from 45 Commando’s X-Ray Company – will work on Exercise Griffin Commando.

It will see British short-term military training teams work with the Lithuanians on a range of skills, including close-quarters battle, marksmanship, contact and break contact drills, plus method of entry techniques using specialist breaching equipment.

This will go alongside joint tactical training designed to strengthen the two nations’ ability to work together.

All of this will lead into participation in NATO’s large-scale multinational exercises, Baltops, which starts on Sunday and will include 40 maritime units, 60 aircraft, and 4,000 personnel from 18 nations.

Exercise Griffin Commando follows on from exercises with the rest of the Littoral Response Group (North) units along the coast of north west Scotland.

More than 300 Commandos from 45 Commando, with specialists from 29 Commando Royal Artillery and 24 Commando Royal Engineers, carried out amphibious assaults, launching on air and landing craft from RFA Mounts Bay and HMS Albion.

Beyond rehearsing missions to deter a fictional aggressor, it was an opportunity to test new tactics as a Littoral Response Group, which is a new breed of task group setup to regularly put commando forces closer to the action in positions of strategic importance to the UK.

The exercise included fast roping from helicopters, vertical assaults up sheer cliffs and infiltrating beaches with inshore raiding craft both at day and night.

The Royal Marines Commandos were joined by the US Naval Special Warfare Task Unit (Europe) (NSWTU-E) and Osprey tiltrotor aircraft from the US Air Force.

Major Chris Armstrong, Chief of Staff to Commander Land Forces, said: “Highland Dagger has been an exciting opportunity to demonstrate commando force and Royal Navy capability in 45 Commando’s home of the Scottish Highlands.

“This has included joint maritime and land planning, integration with US Navy partners and refining how we would operate against a peer adversary. It has been a great starting point for the Littoral Response Group (North) deployment and we have much to look forward to as we sail into the Baltic Sea”.

This exercise used assets from a number of different units, including landing craft from HMS Albion, a Wildcat helicopter from 847 Naval Air Squadron based on RFA Mounts Bay and Ospreys from US Air Force.

With many moving parts, it provided the ideal opportunity for sailors and Royal Marines to experience fast-paced, joint amphibious training.

Lance Corporal Cormac Ford, a Royal Marine in 45 Commando, said: “Highland Dagger was a fantastic opportunity to see the commando force and the Royal Navy working together, side by side. Being able to conduct serials such as vertical Assaults, gave us a great opportunity to practice our core commando skills alongside our US partners. This experience has given me a great insight into what other roles exist and how they work together, and learning lessons that will help feed into the future commando force.”

After these exercises, the task group headed for the Baltic, while X-Ray Company flew out from RAF Lossiemouth on a Voyager transporter into Vilnius, the Lithuanian capital.