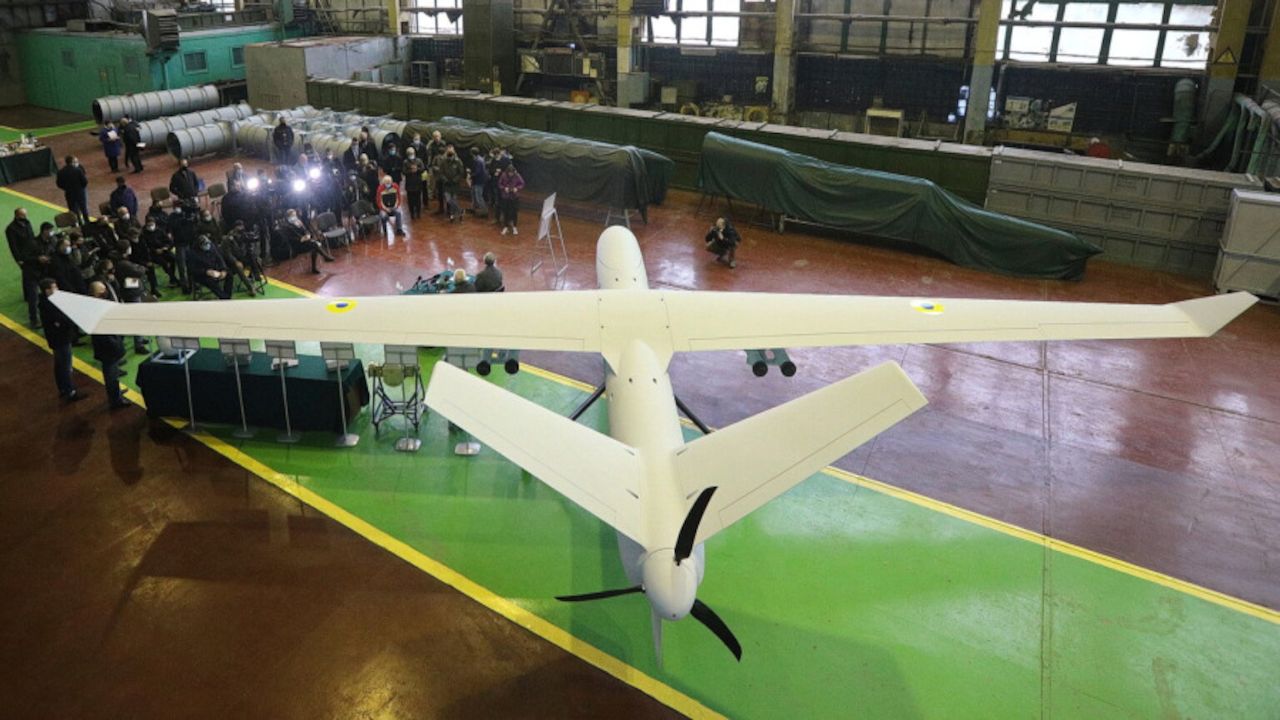 If completed and accepted for service, it can potentially end up being the first strike drone designed and produced in Ukraine.

The project is still in its earliest stage — the engineering team presented the aerial vehicle’s full-size mockup model at the Vizar missile plant in the city of Vyshneve just outside Kyiv.

“Why did we decide to start the development process?” said Oleh Korostyliov, the Luch bureau chief designer.

“Because over the recent years, with all the projects we have completed, we have in fact cultivated most of the technologies needed to build a full-fledged aerial vehicle.”

It took nearly a year and a half for the development team to complete the project on the paper.

Many developments applied in Sokil-300 were previously used with the bureau’s earlier works, particularly with the RK-360MC Neptune missiles, which were designed in just a few years and accepted for service in 2020.

This particularly concerns the drone system’s control point — which, with certain software adaptations migrated to the Sokil directly from Neptunes.

The Neptune systems are generally considered a major success of Ukraine’s arms industry in the wake of Russia’s military threat at Ukraine’s southern seashores. For the successful development of the Neptune missile, Korostyliov was awarded the title of Hero of Ukraine in 2020.

Upon that, all of the new drone project’s navigation components — optics, range measuring system, laser channel — are ready to be produced in Ukraine, except for its thermal guidance system.

The basic version equipped with the engine MC-500B from Zaporizhia-based Motor Sich can gain a cruising speed of 335 kilometers per hour with a maximum range of 1,000 kilometers and also stay in the air for nearly 3 hours.

Another version featuring AI-450T2 engine developed by Ivchenko-Progress is expected to stay airborne for 5 hours and have a maximum range of 1,300 kilometers but at the expense of its cruising velocity of only 275 kilometers per hour.

Finally, the long-range version featuring Austrian-produced turbo-charged engine Rotax 914 can cover the distance of as long as 3,300 kilometers and stay airborne for 26 hours, but at the speed of 150 kilometers per hours.

“That is the rule of machinery, need to choose between high velocity and long operational ranges,” as Korostyliov explained.

“We expect the military to choose the version that suits their needs best.”

All versions are expected to carry up to 300 kilograms of payload, particularly four guided missiles RK-2P which drives from man-portable anti-tank missile system Barrier, or RK-10 missiles also presented by the Luch bureau in 2019.

The system can be operated by 2-strong crews manning a mobile control unit based on a vehicle that is yet to be chosen by the military.

In spite of that, according to developers, the Ukrainian drone is expected to be employed to a greater degree in surveillance operations rather than carrying our missile strikes.

The drone’s airframe, which was created under a slight influence of the General Atomics MQ-1 Predator system, has a wingspan of 14 meters and a length of 6.5 meters.

According to chief designer Korostyliov, Ukraine’s military have already expressed their interest in the program, which demands nearly Hr 150 million ($5.3 million) in financing. A Sokil-300’s ultimate production price is estimated at Hr 40-45 million ($1.4-1.6 million).

“This is way cheaper than as if we purchased a similar drone abroad,” Korostyliov said.

Upon that, as Korostyliov told the Kyiv Post, provided that full-fledged financing is available, the Luch design team would need nearly a year and a half for all necessary flight tests, and the family’s first drone can be in the air within 9 months after the production launch.

In case of full success, the military expected to accept for service a squadron of Sokil-300s, which are to be operated along with more advanced and expensive strike drone systems Bayraktar TB2 purchased by Kyiv from Turkey.