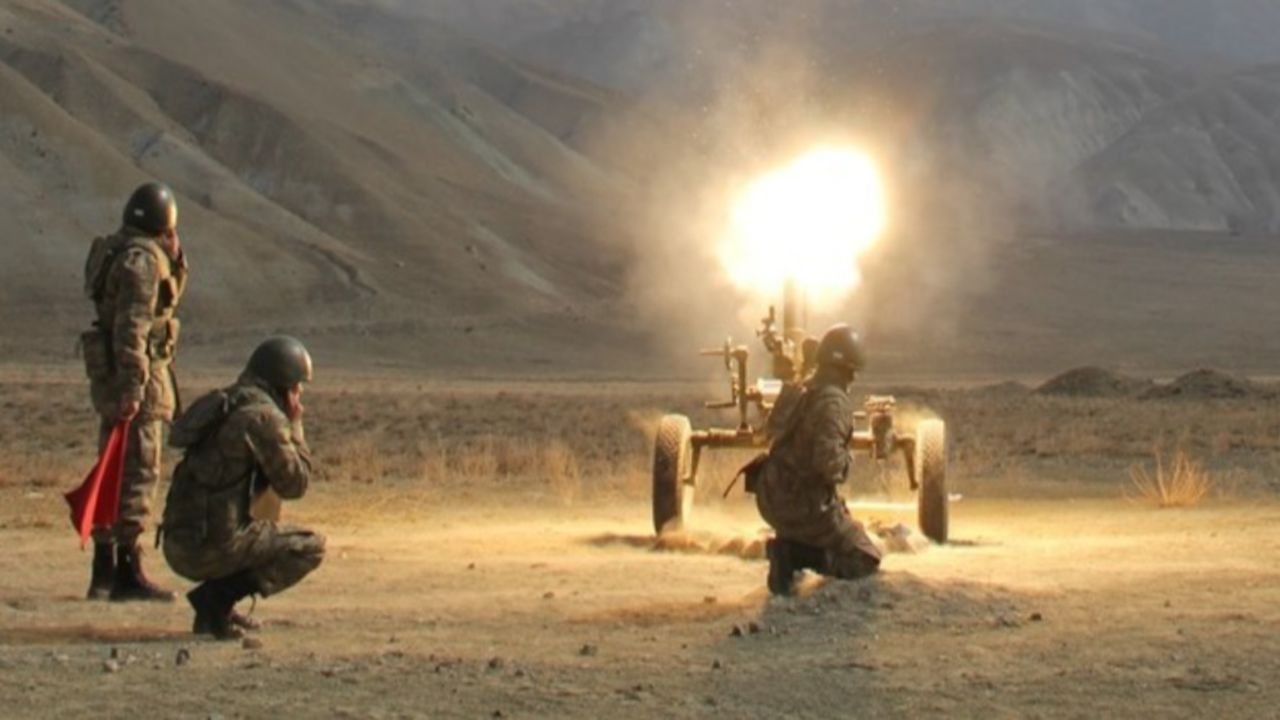 Traditionally, the Turkish army is one of the top armies in using mortars and conventional artillery through the history of time. The historians unanimously agree that Turks used  the mortars  first during the siege of Constantinople in 1453 and siege of Belgrade in 1456. Even the idea of the weapon came from the Ottoman Sultan Mehmed II the Conqueror.

Mortars also considered as poor man’s artillery, which can fire projectiles at an elevation angle of more than 45 degrees. It is an indirect fire weapon for close fire support to engage targets located at inaccessible positions. From the fifteenth century siege mortars up to present day, these weapons continues to exist within the field of war and became far advanced, since five centuries.

Today mortars come almost with all types of sizes and calibers; from one-man 37mm spade type to a massive 240mm self-propelled mortar (SPM). Although mortars generally known as an infantry weapon, different units can also use them during a combat maneuver as a primary means of fire support.

Despite their considerably poor mobility and transportability, modern-day infantry prefers to use of 120 mm towed mortars due to their long range and massive impact on their targets. (120 mm mortars have a maximum range of between 7,200 – 9,500 m with up to 70m diameter of lethal busting area)

According to the British and US Armies’ data, 120mm towed mortars need 6-8 minutes to be positioned, and another 3-5 minutes till ready to be fired. Detecting and determining targets, and coordination of fire support together with uncasing and preparing ammunition are among the activities that take considerable amount of time.

Are Mortars on the Verge of Extinction?

Green Archer mortar detection radars, which appeared in the early 1960s, were first used by the British Army. We see that almost all militaries have incorporated counter artillery and mortar radars into their inventory over the past decade. Mortar detection radars can detect mortar rounds launch and dropping locations from miles away with high accuracy in two minutes time (2006, French Army Studies).

The Turkish Armed Forces have frequently used mortar/artillery detection radars in operations that have been carried out in recent years as part of measures taken for border security operations. These radars were able to determine the path and velocities of projectiles while they are inbound, as well as determining their locations, type of projectile and drop location/time while being able to eliminate the enemy threat in a very short time.

Under these circumstances, future mortar systems are expected to be highly mobile with shoot and scoot capability, highly accurate as well as protected against mines, small/medium calibre kinetic energy threats and artillery fragments.

Mobilizing the mortar guns is not quite a new idea. The mortars, which were frequently used on both sides in the American Civil War, were assembled on railway cars in 1865. During World War II, mortars were integrated to both tracked and half-tracked vehicles for the first time.

In recent years, with the appearance of counter mortar technologies and asymmetrical threats such as mines and IED', led modern armies to mobilize weapons together with integrated survivability solutions.

With its wide range of ammunition types, 120mm mortars offer more tactical advantage to its users. Specially with new generation smart ammunitions such as STRIX which can be fired from smoothbore mortars.

This type of ammunition comes forward with its capability to engage with mobile targets such as armoured units, from long distances with high accuracy.

As a part of the TLF’ Armoured Combat Vehicle (ACV-15) project in 1990, FNSS had the privilege to produce and develop its first armoured mortar vehicle (AMV).

Today FNSS continues its work on integrating 120mm mortar guns into mobile platforms and delivering them as complete weapon systems. In this direction, it has a significant experience with integrating different mortars to tracked and wheeled platforms.

In recent years, mortar systems have been used effectively by the Turkish Armed Forces in battlefields within the Network Enabled Operations (NEOps) concept, which all modern armies have been implementing over the past few years.

Mortar systems efficiency is not only dependent on reliability, precision and ammunition impact. However, it is also dependent on the capability of detecting targets, prioritizing them and then taking decision on which target to engage with, according to its firing parameters, which are precisely determined and calculated with high accuracy.

After the detected targets have been engaged with and destroyed by the new generation mortar systems, mortar vehicles immediately change position and get redeployed to begin a new firing cycle.

Thanks to their high mobility, they elevate the survivability rate of troops and increase operations tempo, fire support capabilities as well as manoeuvrability on battlefield.

FNSS has been integrating 120mm mortar systems onto tracked armoured vehicles such as ACV-19 and M113A4 and supplying these systems to different customers and users in the Middle East and South East Asia.

The most up-to-date configurations of self-propelled mortars (SPM) are the AV-8 8x8 AMV and PARS III 8x8 SPM used by the Malaysian and Omani Armies.

FNSS successfully integrates different variants of 120mm mortars into these vehicles in tailor-made solutions according to different user requirements.

The PARS III 8x8 SMP provides a very stable and balanced platform for 120mm mortar systems, which guarantees high precision and firing rate. In addition, thanks to its large internal volume, there is enough space in the vehicle to store a considerable amount of ready-to-fire mortar ammunition.

Compared to 4x4 and 6x6 platforms 8x8 SPM` are expected to be able to carry more rounds. PARS III and AV-8 8x8 SPMs have undergone various testing and evaluation processes in various terrains and most severe weather conditions. The tests and evaluations were carried out in a tropic climate, soft soil terrains of South East Asia. And also tested in scorching temperature deserts of the Middle East.

The PARS III 8X8 SPM` combat weight is 30,000 kg and is powered by a diesel engine. The powerpack consists of a water-cooled diesel engine, coupled with a fully automatic transmission which generates a maximum road speed of up to 100 km/h.

PARS III 8X8 SPM is capable of manoeuvring on a 60% vertical and 30% horizontal gradient, climbing 70 cm-high obstacles and crossing 200 cm-wide trenches. Thanks to the engine layout and favoured balanced design, the vehicle has almost equal axle loads.

This design approach gives the vehicle the ability to move comfortably even on loose and soft terrain, providing increased road-grip at high speeds and short braking distances.

The vehicle has 8X8 driving characteristics, and all of its axles can be locked when necessary. The central tire inflation system allows the driver to adjust the tire pressures to suit different terrain conditions.

The fully independent hydro-pneumatic suspension system, gives the vehicle the highest wheel travel of its class, and ensures the best road grip under different road conditions.

The PARS III 8X8 SPM` all-axle steering system gives the vehicle the lowest turning radius in its class at 8 m. This feature enables the vehicle to manoeuvre easily even in residential areas with poor infrastructure.

The vehicle’s hull can be brought up to the level of protection required by the user, thanks to the modular design of the armour system. The hull form, underbelly structure, base plates and specially developed mine-resistant seats are designed to protect personnel against high-level mine threats.

PARS III 8x8 SPM has the protection level of a mine-resistant personnel transport vehicle while differentiating itself through the provision of superior capabilities expected from a modern armoured combat vehicle.

Thanks to the spall liner inside the vehicle, the crew and personnel inside are protected against the fragmentation effect caused by armour piercing ammunition.

There is an automatic fire suppression system in the commander / driver cockpit, the crew compartment, the cabins that contain the 120mm mortar system and its ammunition as well as in the cabin that houses the power pack.

The vehicle also has fuel tanks incorporating special measures to protect against explosions and puncture, and a reserve fuel tank under the armour the can be called upon in emergencies.

The PARS III 8x8 SPM has an integrated air-conditioning system, and the main difference of this system that makes it stand out from its counterparts is that even in desert conditions, the vehicle’s internal temperature can be kept at +25 °C.

Integrated positive pressure NBC (Nuclear, Biological, Chemical) protection is one of the standard equipment on the PARS III 8x8 SPM. The auxiliary power unit (APU), which can be integrated upon user request, allows the use of the mortar systems without starting the engine wherever the vehicle is located. This feature greatly reduces the thermal signature of the vehicle in question.

PARS 8x8 SPM provides adaptable tactical firepower. The vehicle has the capability of firing a wide range of ammunition, including smart ammunition and precision guided ammunition, at a range extending to 9km, thanks to its quickly deployable smoothbore- mortar.

The mortar is kept folded inside the vehicle while on the move and can be brought to firing position under in a minute time by opening the hydraulic hatches on top of the vehicle.

With its wide elevation angle and 190 degrees of traverse capacity, the electrically driven 120mm mortar system of PARS III 8x8 SPM can cover a wide area.

Thanks to its ballistic computing capability, it instigate firing in extra quick time, including multiple rounds simultaneous impact (MRSI) capabilities. It also allows the user to avoid mortar detection and destruction systems by firing 4 rounds from two different locations, in less than 3 minutes.

The vehicle also has an integrated 7.62mm machine gun on its front section for self-defence purposes.