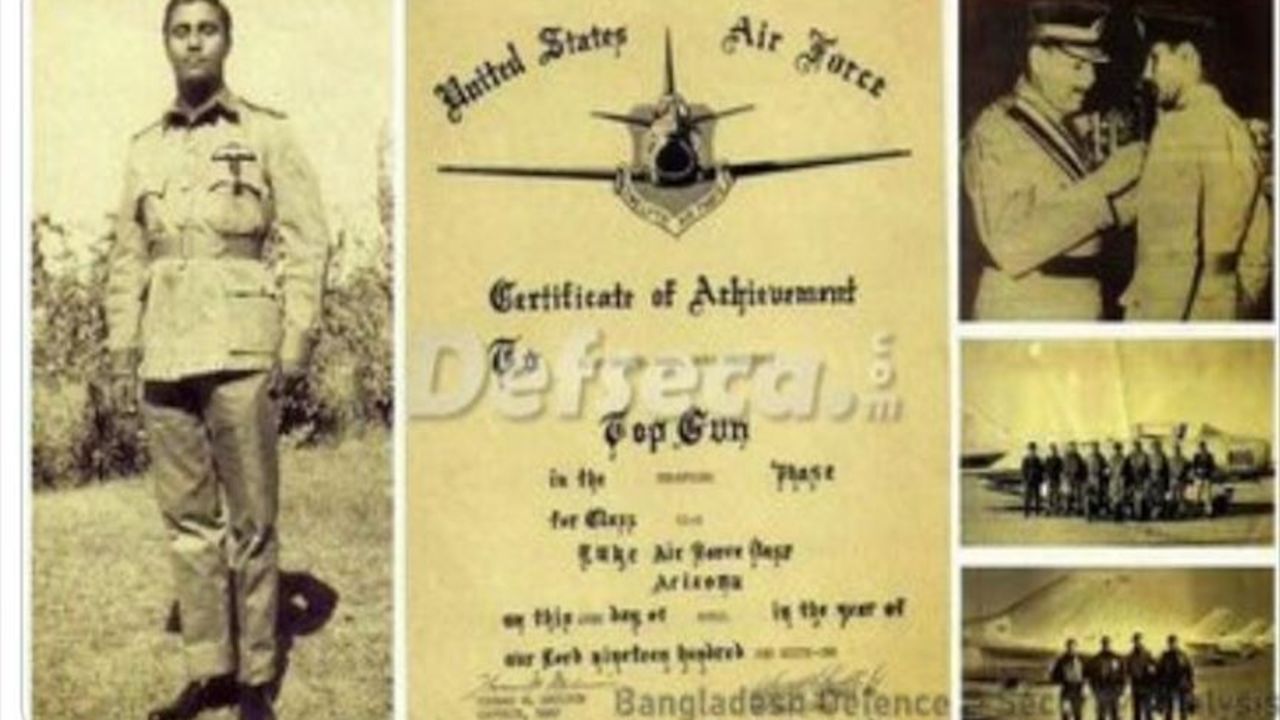 Legendary Bangladeshi-origin fighter pilot Saif-ul-Azam, who passed away Sunday morning, evokes memories of his courage, steadfastness, and bravery in the Middle East, far away from his home.

He will go down in history, perhaps the only pilot who piloted fighter planes for four countries – Jordan, Iraq Pakistan, and Bangladesh. He also holds the unique record of destroying fighter planes of two different air forces – India and Israel.

The retired group captain died at the age of 80 in the Bangladeshi capital of Dhaka on Sunday after suffering from various old-age complications, according to media reports.

The Arabs in the Middle East recall his outstanding performance in the 1967 Arab-Israel War, where his exceptional skills and maneuvering kept Israeli Air Force at a bay.

Experts say, that due to Azam’s eagle eye, both Iraqi and Jordanian air bases were saved from meeting the fate of the Egyptian Air Force, which was decimated by Israelis.

A day later, when he was shifted to an Iraqi airbase, he brought down two state-of-art Israeli fighter aircrafts Vautour IIA and Dassault Mirage III.

Earlier during the 1965 India-Pakistan War, as part of Pakistan Air Force’s 17 Squadron, he shot down Indian Folland Gnat interceptors, which led to the capture of its pilot Vijay Mayadev.

Born in a remote area in Bangladesh’s mid-northern district of Pabna in 1941, he spent his childhood in the Indian city of Kolkata with his father. After the partition of the Indian subcontinent in 1947, his family migrated to Bangladesh (then East Pakistan).

According to the South Asia-based analytical website the Roar Media, Azam left home at the age of 14 for higher secondary education in the then West Pakistan Now Pakistan]. In 1958 he was admitted to Pakistan Air Force Cadet College, where he completed his education as a pilot officer.

Popular defense blog the Fighter Jets World also records that after learning the fundamentals of aviation in Pakistan, Azam was sent for advanced air combat training at Luke Air Force Base in Arizona.

Pakistan Air Force Chief Air Chief Marshal Mujahid Anwar Khan recalled Azam’s heroic deeds during the 1965 Indo-Pak and 1967 Arab-Israel wars. He described him as “an exceptional fighter pilot who would always be remembered for his valor and professionalism.”

In November 1966, Azam was deputed to Royal Jordanian Air Force”, as one of the advisors. According to a Pakistan’s defense website, on June 5, 1967, four Israeli jets were descending on Jordan’s Mafraq airbase to smash the country’s tiny air force, shortly after the entire Egyptian air force had been reduced to rubble.

“To intercept the incoming attack, Jordanian Air Force commanders deputed Azam to thwart the attack. Once airborne with other Jordanian pilots, Azam engaged the attacking aircraft in air-to-air combat, shooting down a Mystere commanded by Israeli pilot H. Boleh and shot and damaged another that crash-landed in Israeli territory,” the website added.

After this incredible feat, he was shifted to Iraq two days later to defend air bases, where he shot down two Israeli attacking planes.

“Within 72 hours, Azam became the only fighter-pilot in the world to hold the record of shooting down three Israeli aircraft in air-to-air combat, a record that still stands today,” Pakistan’s defense website claimed.

Defense blog Fighter Jets World says that the Israeli Flight Capt. Gideon Dror, who had shot down Azzam’s Wingman, had ejected from the plane and was detained as a prisoner of war in Iraq.

In recognition of the heroic contributions of Azam, he was conferred with military awards by Jordan and Iraq.

The US also conferred Living Eagles tittle to the legendary fighter in 2001 for his outstanding skills.

After the independence of Bangladesh in 1971, the veteran fighter joined the Bangladesh Air Force to serve his homeland. In 1980, he retired and joined the civil service and later took up a political career.

Terming Azam as pride for Bangladesh, former Chief of Border Guards Bangladesh, Major Gen. Fazlur Rahman, said his name will remain written in golden words in the history of Bangladesh.

Speaking to Anadolu Agency Rahman described Azam as a historic figure with a unique and unparalleled record.

“He is a source of inspiration for every soldier in the battleground on how to defeat the big enemy with limited weapons. He set a milestone in optimum use of skills and courage during war,” Rahman said.