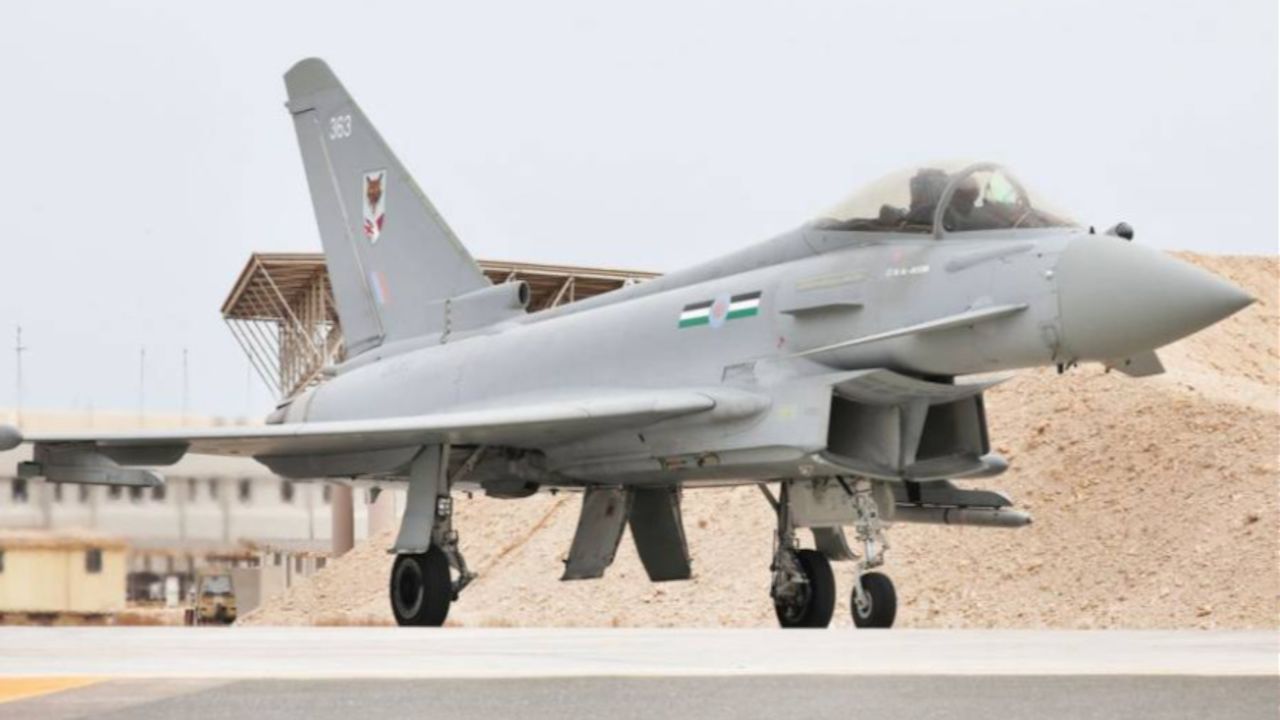 Typhoons from No. 12 Squadron have arrived in Qatar for Exercise Epic Skies, the Royal Air Force reported on its website on December 2. Pilots from the RAF and Qatar Emiri Air Force (QEAF) will fly the Typhoons together for the first time as a joint squadron in Qatar, strengthening the close ties between both nations.

More than 130 personnel from the Royal Air Force have deployed to Qatar to support the two-week joint exercise, which will see Qatari pilots and engineers fly and maintain the Typhoon alongside their RAF colleagues. Pilots from the joint squadron will be challenged in a range of air to air, and air to surface scenarios which will put their training to the test.

The Government of Qatar has ordered 24 Typhoons as part of a £6 billion deal, which also includes 9 Hawk jet trainers and a bespoke support and training package. Qatari pilots, engineers, and technicians are completing world-class training at a number of RAF establishments prior to joining 12 Squadron, where they will develop their technical skills and build their experience on the Typhoon.

12 Squadron reformed in 2018 as the RAF’s first joint squadron since the Second World War. Qatari pilots and ground crew have been learning how to fly and maintain the Typhoon at RAF Coningsby since June 2020, with RAF personnel providing world-class training both in the air and on the ground.

Wing Commander Chris Wright, Commanding Officer of 12 Squadron, said : “It has been fantastic to return to Qatar this year and receive such a warm welcome from so many familiar faces. Considerable progress has been made since last year’s Epic Skies, with many pilots and engineers from the Qatar Emiri Air Force thoroughly embedded into 12 Squadron. The first of the Qatari pilots to begin flying the Typhoon are eager to put their new skills and training to the test, flying alongside their colleagues in a series of challenging scenarios on home turf.”

Lt Col Faisal Al-Ghanim, Deputy Officer Commanding 12 Squadron, said : “This year’s Epic Skies is particularly unique. I’ve been involved in several of these exercises in the past, but this year is the first time I return home to fly the Typhoon alongside my RAF and Qatari colleagues, wearing the 12 Squadron crest. We joined the Squadron earlier this year to a very warm welcome, quickly integrating into day to day life and operations. Returning to fly from Qatar at a familiar air base is an absolute privilege, and I look forward to the challenges the exercise brings to our joint squadron.”

Stability in the Middle East is a priority for both the UK and Qatar. 12 Squadron’s joint operational training will boost Qatar’s ability to tackle our shared security challenges, ensuring regional stability and protecting the security of the UK at home.