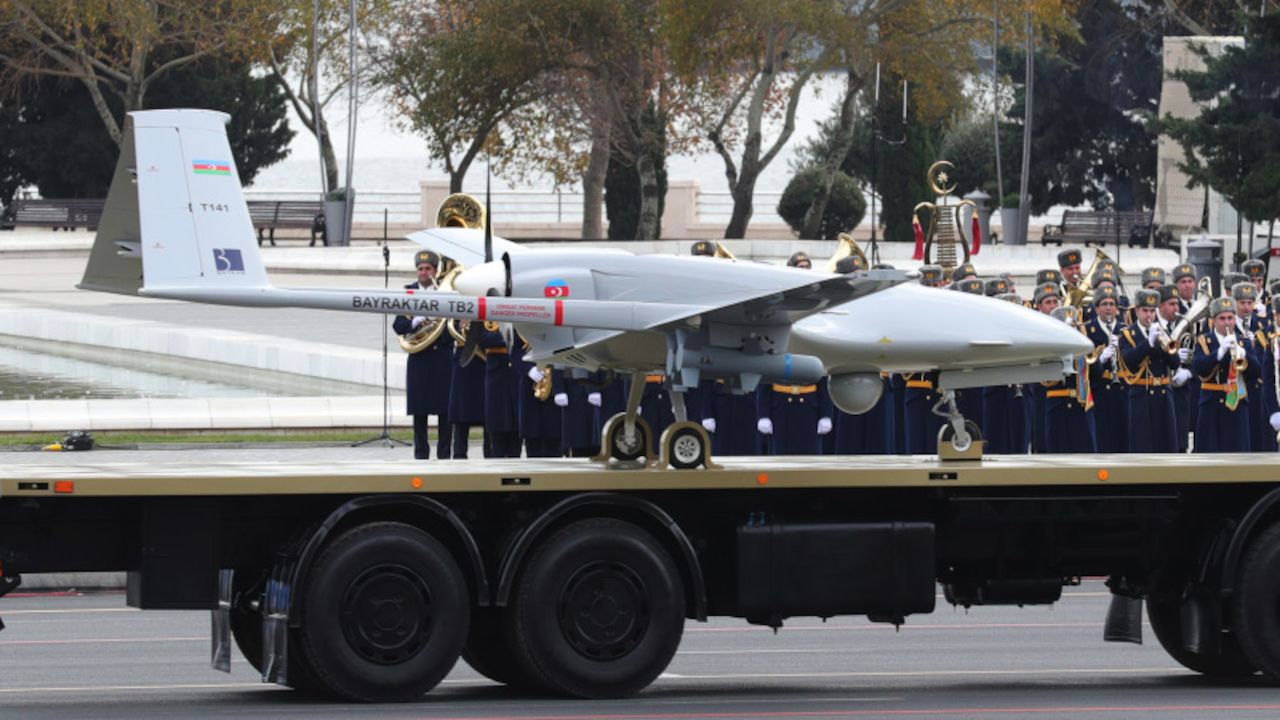 The report stated the following: "A soldier idles by a Russian-made T-72 tank. A moment later, a missile fired from a drone slams into the vehicle, exploding in an orange flash, blowing the man off his feet and leaving the tank a smoldering wreck.

The scene is one of dozens of aerial videos that were posted online in Azerbaijan last year showing off a new weapon. Over six weeks, it helped the nation regain territory in the Nagorno-Karabakh region that had been held by Russian-backed Armenian forces for more than two decades. The videos show attacks on tanks, trucks, command posts, mortar positions and radar installations.

Smaller militaries around the world are deploying inexpensive missile-equipped drones against armored enemies, a new battlefield tactic that proved successful last year in regional conflicts, shifting the strategic balance around Turkey and Russia. Drones built in Turkey with affordable digital technology wrecked tanks and other armored vehicles, as well as air-defense systems, of Russian protégés in battles waged in Syria, Libya and Azerbaijan.

These drones point to future warfare being shaped as much by cheap but effective fighting vehicles as expensive ones with the most advanced technology.

China, too, has become a leading war drone exporter to the Middle East and Africa. Iran-linked groups in Iraq and Yemen used drones to attack Saudi Arabia. At least 10 countries, from Nigeria to the United Arab Emirates, have used drones purchased from China to kill adversaries, defense analysts say.

Flying alone or in a group, these drones can surprise troops and disable poorly concealed or lightly defended armored vehicles, a job often assigned to expensive warplanes. The drones can stay quietly aloft for 24 hours, finding gaps in air-defense systems and helping target strikes by warplanes and artillery, as well as firing their own missiles.

Militaries, including the U.S., are upgrading air-defense systems to catch up with the advances, seeking methods to eliminate low-budget drones without firing missiles that cost more than their targets.

The U.S. Air Force Research Laboratory is also developing Skyborg and Valkyrie, lower-cost autonomous aircraft that are part of an innovation program. “Our adversaries are already fielding technologies that will hold our legacy platforms at risk,” an Air Force official said in a statement.

Israel and the U.S. have long used high-end drones in counterterrorism operations to target prominent enemies. But the countries have hesitated to sell their top models, even to allies, for fear of proliferation.

Responding to drone deals that China and other producers have struck with countries shunned by the U.S., the Trump administration last July relaxed its export policy somewhat, potentially boosting sales of more capable models than previously allowed. The United Arab Emirates said in January it had agreed to buy 18 U.S.-made MQ-9 drones for nearly $3 billion.

Technological advances and global competitors have produced inexpensive alternatives. The standard-bearer of the latest armed-drone revolution emerged last year on the battlefields around Turkey, the Bayraktar TB2.

Compared with the American MQ-9, the TB2 is lightly armed, with four laser-guided missiles. Its radio-controlled apparatus limits its basic range to around 200 miles, roughly a fifth of the ground the MQ-9 can cover.

Yet it is utilitarian, and reliable—qualities reminiscent of the Soviet Kalashnikov AK-47 rifle that changed warfare in the 20th century. A set of six Bayraktar TB2 drones, ground units, and other essential operations equipment costs tens of millions of dollars, rather than hundreds of millions for the MQ-9.

The drone’s Turkish producer, Baykar, which started in 1984 making auto parts, boasts of more bang for the buck. Qatar and Ukraine are customers. Poland, a North Atlantic Treaty Organization member, said last month it would buy 24 TB2 drones. Several other NATO allies are interested, as well as countries in Africa and Asia, Turkish government and company officials said.

The TB2 drone gained international notice in the skies over Syria in early 2020.

Toward the end of February, the Syrian regime, backed by Russia, was advancing on the city of Idlib, which was held by rebels supported by Turkey. After an air raid killed more than 30 Turkish soldiers, Turkey embarked on Spring Shield, an operation that integrated drones with electronic warfare systems, ground troops, artillery and warplanes.

The drones, quiet and hard to spot on radar, flew for hours seeking gaps in air-defense systems, which fell “like domino tiles” once breached, said Haluk Bayraktar, chief executive of Baykar. The vehicles operated in groups of a dozen or so to attack targets simultaneously, Turkish government and company officials said.

Ismail Demir, head of Turkey’s state body overseeing the defense industry, said the low cost of these drones allows military forces to take more risks with them. “If you lose one, two, three,” he said, it doesn’t matter as long as others find a target.

Last spring, the TB2s helped turn the tide in the Libyan civil war for the Tripoli-based government, which is backed by the United Nations.

Turkey had sent arms in 2019 to stem an assault on the capital by militia leader Khalifa Haftar, who is supported by Russia and others. In 2020, Turkey increased military support. Improved drone tactics honed in Syria provided the upper hand against Russian-made surface-to-air missile systems known as Pantsir, handing the Tripoli government aerial supremacy. By June, Mr. Haftar’s forces retreated from Tripoli.

The success of the drones has helped Turkey President Recep Tayyip Erdogan, an at-times fractious U.S. ally, to expand his regional influence without risking significant numbers of troops or costly equipment.

While Turkey’s enhanced capabilities may benefit NATO, fellow members worry that the ability of Mr. Erdogan to deploy and sell drones could embolden his assertive pursuit of a more independent foreign and security policy.

“The U.S., like a lot of European partners, is leery of Turkey’s drone exports and the aggressive way Turkey has been using drones in these conflicts,” said Dan Gettinger, a researcher at the Mitchell Institute for Aerospace Studies, a nonpartisan policy research group in Arlington, Va.

Mike Nagata, a retired U.S. Army lieutenant general in special operations, said drones were “part of a much larger challenge regarding the future of the relationship between Turkey and the United States and NATO.”

Ukraine signed a deal in January 2019 to buy TB2 drones from Turkey, receiving at least six so far, and Kyiv is in talks for joint production. A Ukrainian company is manufacturing engines for the latest Baykar drone, a larger model with a heavier payload than the TB2.

The country hopes the drones will discourage a repeat of the Kremlin’s 2014 invasions. “They allow us to deter Russian aggression or to retaliate if they invade,” said Yuriy Mysyagin, deputy head of the defense committee in Ukraine’s Parliament. “We saw how they performed last year.”

Ukraine’s military in March posted details of flight-training over the Black Sea some 50 miles from Crimea, which Russia annexed in 2014. The Defense Ministry declined to comment further.

Mr. Erdogan told Ukrainian President Volodomyr Zelensky during an April meeting in Turkey that Russian President Vladimir Putin threatened to extend the flight ban unless Turkey pulls back from its drone sales and support to Ukraine, according to a person briefed on the conversation.

Neither the Kremlin nor the Russian Defense Ministry responded to requests for comment.

Turkish officials say they aren’t seeking conflict with Russia by taking on its allies. Turkey has close energy ties with Moscow, and it purchased an advanced Russian air-defense system, leading to sanctions from the U.S.

The TB2 was born of Turkey’s dissatisfaction with available models from the U.S. and Israel, and the country’s desire for systems under its control to fight the PKK, a Kurdish militant group.

“Those countries did not cooperate with us sufficiently, so we had to launch our own program,” Mustafa Varank, Turkey’s minister of industry and technology, said in an interview. “Turkey is now reaping the fruits of taking the right decisions at the right time.”

Baykar emerged as a leader among several Turkish drone producers after spotting a niche in the early 2000s, said Mr. Bayraktar, the company’s chief executive. His brother Selcuk Bayraktar, who took advanced studies at the Massachusetts Institute of Technology, came up with flight-control software and guidance systems while using off-the-shelf components.

During development, company officials set up a workshop at a military base to get a firsthand understanding, including from a colonel who took them to a patch of bloodied ground where, they said, Turkish soldiers were killed by the PKK.

In 2007, Turkey launched a national competition to supply mini drones, which yielded an order of 76 from Baykar. At the time, the U.S. wouldn’t sell armed drones to Turkey. Baykar developed the TB2 and gradually replaced foreign components with locally produced ones. In 2015, the company successfully test-fired a precision-guided munition.

Turkey’s military initially used the drones within its own borders and in northern Iraq and Syria. Soon, Mr. Erdogan deployed them in wars near Turkey’s borders.

Azerbaijan, geographically and culturally close to Turkey, procured a set of TB2 drones last year. The country had lost control of the Nagorno-Karabakh region to Armenia in a war that ended in a 1994 cease-fire. Rising petroleum wealth had bolstered Azerbaijan’s military in the years since.

Oryx, a blog that verifies destroyed equipment using photos and videos, cited the destruction by the drones of 106 Armenian tanks, 146 artillery pieces, 62 multiple rocket-launch systems, 18 surface-to-air missile systems, seven radar units and 161 other vehicles. Total losses, Oryx noted, were likely higher. Azerbaijan had 30 tanks destroyed, among other vehicles and equipment, according to the blog.

After six weeks of fighting, the Kremlin, which is close to both countries but has a military alliance with Armenia and troops on its territory, brokered a cease-fire in November, and Azerbaijan regained most of its long-lost territory.

The Azerbaijan victory caught the attention of Turkey’s suppliers. Some companies and countries, including Canada, halted export of components used in the TB2. Baykar company officials said they have integrated a Turkish camera and accelerated work on a replacement engine, which is expected by year’s end.

At a December victory parade in Baku, Azerbaijan’s capital, Mr. Erdogan sat next to his Azerbaijani counterpart, Ilham Aliyev, on a dais lined with Turkish and Azerbaijani flags. Triumphal music blared. When a phalanx of trucks carrying TB2 drones passed, Mr. Aliyev nodded and smiled."