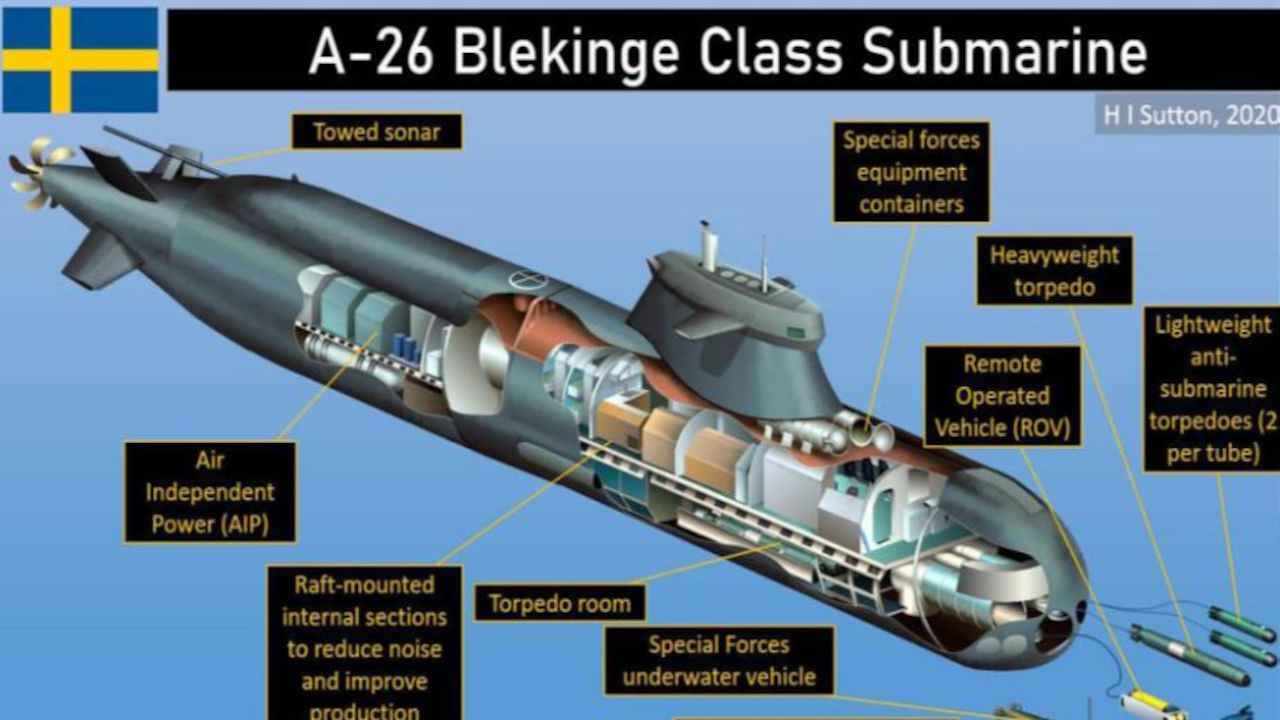 For Walrus Replacement Program, Swedish company SAAB and Damen from Netherland offer its Expeditionary Submarine which is based on the capabilities of the Swedish A26 also known as Blekinge-class and puts into practice the experience of the Swedish designed Collins-class submarine in-service with the Australian Navy.

In addition, the Walrus replacement will also benefit from the operational lessons reflected in the Swedish Navy’s Gotland Mid Life Upgrade. As a result, the Expeditionary Submarine will be equipped with state of the art technology whilst benefiting from de-risking on three submarine classes. Saab and Damen are thereby creating one of the most modern Air Independent Propulsion (AIP) submarines in the world, which if selected, will be done in consultation with the customer using a ‘design to cost’ approach.

The production process will see sections made in Sweden and then assembled at Vlissingen in the Netherlands. Having secured the cooperation of many Dutch companies, Saab and Damen are set to enhance the domestic submarine competence.

The A26 submarine, also known as the Blekinge class submarine, currently in production at the shipyard in Karlskrona. Two submarines are to be built for the Swedish Navy, with the first submarine being delivered in 2022. They will be a further development of the Gotland class.

The A26 is a next-generation submarine with the ability to perform in all oceans and across a broad spectrum of conflict environments. Along with its traditional load of mines and torpedoes, the submarine can be equipped with missiles. But the really major innovation is the large horizontal tube, the Multi Mission Portal, with its ability to launch and retrieve both manned and unmanned underwater vehicles.

The A26 will also be a crucial intelligence gathering platform in the defense network. The submarines are powered by conventional diesel engines and the Kockums Stirling AIP (air-independent propulsion) system. The Stirling system enhances the submarine’s stealth characteristics and makes it difficult to detect.

The new A26 submarine would have blue water capability, something earlier Swedish submarines have lacked. It will be equipped with modified AIP stirling propulsion and GHOST (Genuine HOlistic STealth) technology, making the submarine extremely quiet. It will also be designed to withstand significant shock loads from underwater explosions and would be able to "Launch and recover vehicles" through its torpedo tubes. It would displace 1,900 tonnes and have a crew complement of between 17 and 31 men. The A26 submarine could be fitted with 533mm or 400mm torpedo tubes.

Saab receives order for Carl-Gustaf ammunition and AT4 from U.S. Armed Forces
Saab