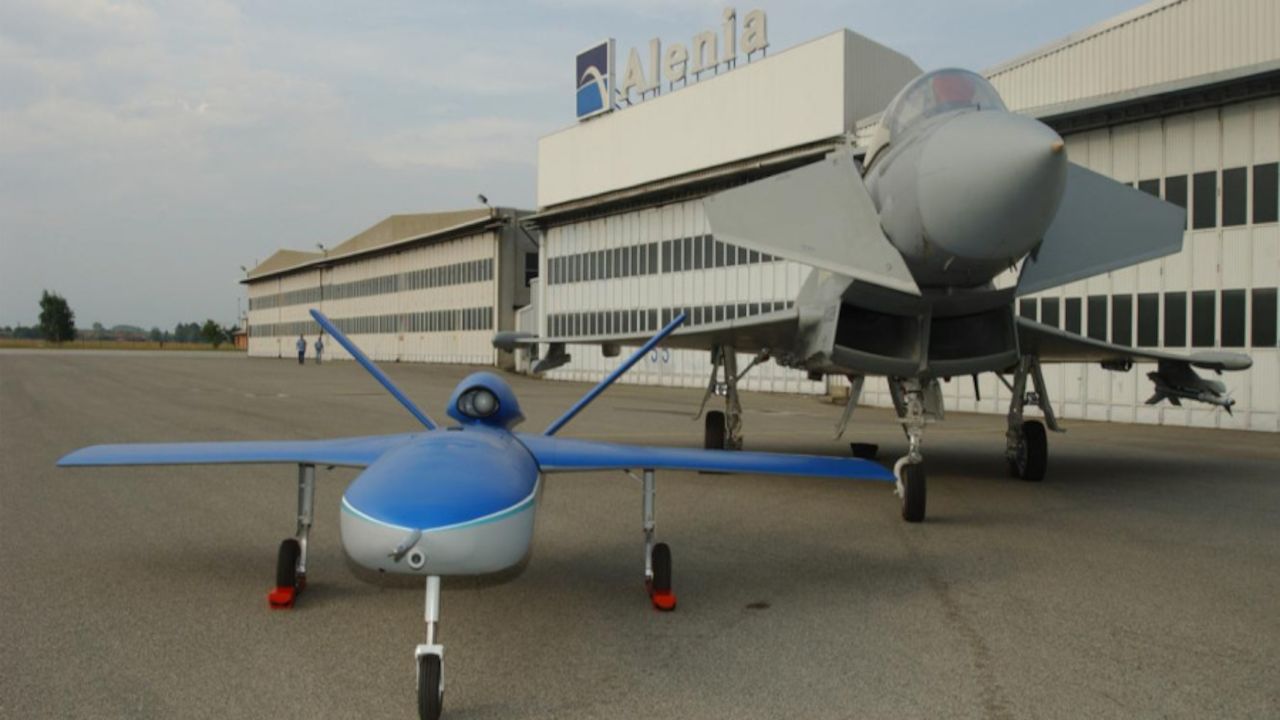 The Sky-X demonstrator conducted the first flight on 29 May 2005 at the Vidsel, Sweden test range. This historic event took place without clamour in an area near the arctic Polar Circle, far removed from people and air traffic. It was a demonstration of the first Unmanned Air Vehicle (UAV, today commonly known as drone) with a jet engine weighing over 1,000kg to fly in Europe. It was also the first to be equipped with an internal payload bay, and the first to be designed for operational roles. The testing activity culminated in 2008 with a “world first” when the Sky-X demonstrated the capabilities of automatic refuelling and formation flight with another aircraft.

With this first flight, the then Alenia Aeronautica - the company that later merged into what is today the Leonardo Aircraft Division - found itself at the height of world aeronautic testing and, to all intents and purposes, entered into the future of unmanned aircraft.

Meanwhile, the actual Leonardo Electronics Division consolidated the Mirach systems, a radio-guided aerial target launched in 1959 with its ancestor Meteor P1 and the Falcon XN, an unmanned surveillance system in the 600kg class.

Commander Enrico Scarabotto, today the head of the Aircraft Division’s Flight Operations, remotely piloted the Sky-X during its first flight from a ground control station connected to the aircraft via datalink. The main system components, and more specifically the flight characteristics, were tested during the flight.

Remote aircraft control is particularly challenging since the pilot does not have much of the information or physical sensations that they would have if they were on board. This is why preparation for this first flight demanded a considerable undertaking of the team, including virtual testing sessions on a flight simulator developed specially for this purpose.

The company announced its decision to develop a UAV demonstrator like the Sky-X two years earlier, with the presentation of the UAV mock-up at Caselle, Italy in May 2003.

The aim was to develop a technological demonstrator for a new generation unmanned aircraft, to be entirely developed by Alenia Aeronautica and designed to test a wide range of missions for defence and civil protection, including territory observation, surveillance and reconnaissance capabilities.

The task of developing and carrying out this project was given to the visionary Riccardo Barzan, to whom we owe our acknowledgement and due remembrance. The configuration chosen was that of a sweptwing jet aircraft with a ‘V’ tail, and the engine placed at the rear of the fuselage to guarantee low observability, and a ventral bay for the payload. The trial was a qualified success with the validation of the concept aircraft demonstrator for operational use above and beyond surveillance of the territory.

With the first flight of the Sky-X, Alenia Aeronautica consolidated its leadership position in several important technological fields: adaptation/redefinition of the integration processes, flight testing and qualification of a type of aircraft never tested before; remote piloting via Ground Control Station with totally proprietary Data Link and dedicated human-machine interface (HMI); flight control system (FCS) for UAV with electric actuation; integration of general systems with remote control; integration of the emergency flight termination system; advanced configuration with jet propulsion; flight authorisation process with a foreign authority (Swedish FMV) of an aircraft remotely controlled from a test range dedicated to these operations.

This was only the first step of the testing of the Sky-X, which was completed in 2008 with the testing of the automatic flight refuelling procedure carried out over the Adriatic Sea, north of the Apulia region of Italy, with another one of our aircraft, a C-27J acting as an air-to-air refueling tanker. It was a world first. In fact, it was the first time that a UAV performed all approach manoeuvres up to (simulated) link-up with the refuelling aircraft totally independently using an automatic recognition and guidance system.

A UCAV Lab was set up at the Corso Francia plant in Turin, Italy to support Sky-X activities. It provided the opportunity to explore the UAV aircraft management and mission technologies in a realistic artificial environment with a human operator in the loop.

Every success story is built on the work, commitment, and sacrifice of the people who make it possible. The undeniable success of the Sky-X would not have been possible without the commitment of many of our colleagues. This is why we believe it right to give voice to one of them, who represents all those who have made this success possible. And so we spoke with Geremia Pepicelli, Chief Engineer of Sky-X at that stage, about his memories of the project, and in particular those tied to the first flight on that day in Vidsel in 2005:

“Aside from the feelings of pride and satisfaction for that event, the most meaningful memories are those associated with the technological aspects and with the human and professional experience. From the technological viewpoint, what we achieved in 18 months was unmatched, not only in our company, but also amongst our competitors. A jet aircraft with a maximum take-off weight of 1,450kg, a standard aerodynamic configuration in terms of low observability characteristics, with V tail and payload bays that could be reconfigured to accomplish different types of missions, from reconnaissance to ground attack. It was a highly complex machine that we arrived at starting from a clean sheet of paper.

Still today, more than 15 years later, many of the tested solutions are still relevant, and mark my words, 15 years are really a great many in our field. One outstanding example is the in-flight testing called “join-up”. In short, it is an Integrated System (on board-ground) that lets the unmanned aircraft perform highly complex missions, from take-off to landing, totally independently. It ranges from in-flight refueling to formation flying. The system is still today covered by an international patent. All this starting from the arctic Polar Circle, at the test range in Vidsel, Sweden, with the first tests up to the auto take-off & landing, to then return to Italy, to the Amendola Air Force base, for the “dry” In-Flight Refuelling manoeuvre simulation (namely without actual fuel transfer).

It would not have been possible to attain these goals without a highly motivated and mindful group of people who combined their expertise with a desire to put themselves on the line. The company had the capability to focus on a highly innovative field by putting together people with great enthusiasm and professional qualities and was paid back with outstanding results having very low development costs.

Thanks to the experience developed with the Sky-X and with the later Sky-Y (having a totally different aerodynamic configuration, designed for surveillance roles only, with a piston engine and propeller propulsion), Alenia Aeronautica earned the credibility necessary to take part in the major international UAV programmes as a competent and reliable partner. Those programmes include the UCAV nEUROn demonstrator developed with Dassault Aviation in France and other European companies and, more recently, the European MALE RPAS (Medium Altitude Long Endurance Remotely Piloted Aerial System) that Leonardo developed in collaboration with Airbus and Dassault Aviation.

However, the Sky-X experience in particular also offers us the possibility of having all the credentials to continue developing the future new frontier of unmanned aircraft: the so-called “Loyal Wingman”, next-generation autonomous UAV supporting combat aircraft as “followers” and used for special missions. The Loyal Wingman will join a mixed team of manned and unmanned aircraft, interoperable according to Manned-Unmanned Team (MUM-T) logics, and are designed as actual “force multipliers” that increase the effectiveness of the mission and support the survival of the manned aircraft in highly contested scenarios, meaning those with a very high threat level.

In 2018, Leonardo created a central organisational unit called Unmanned Systems to focus attention on all the skills within the group, and create synergies between the various players involved. Today, while the Electronics and Helicopters Divisions are operationally experimenting with MUM-T technologies on existing platforms, the Aircraft Division is exploring the aspects of the design process and of the preliminary operational effectiveness evaluation of some Loyal Wingman classes. Application of artificial intelligence technologies will contribute to increasing their level of autonomy in completing the missions assigned to them, while interoperability will guarantee their integration in a network with all the platforms - manned fighter or surveillance aircraft, ground command and control centres, naval and land forces and other cooperating assets - forming the so-called “system of the systems”, which will be assigned the task of carrying out increasingly complex operational missions in the near future.

Today, the only built airframe of the Sky-X is on display at the Leonardo Aeronautical Industry Museum, inside the Caselle Sud plant in Turin, Italy. Here, it has found its proper place as prime witness to the history of the progress of Italian, and Leonardo’s, aeronautical technology, together with the Ansaldo SVA 9 biplane, the FIAT G.91, the AMX International, the Panavia Tornado and the Eurofighter Typhoon.