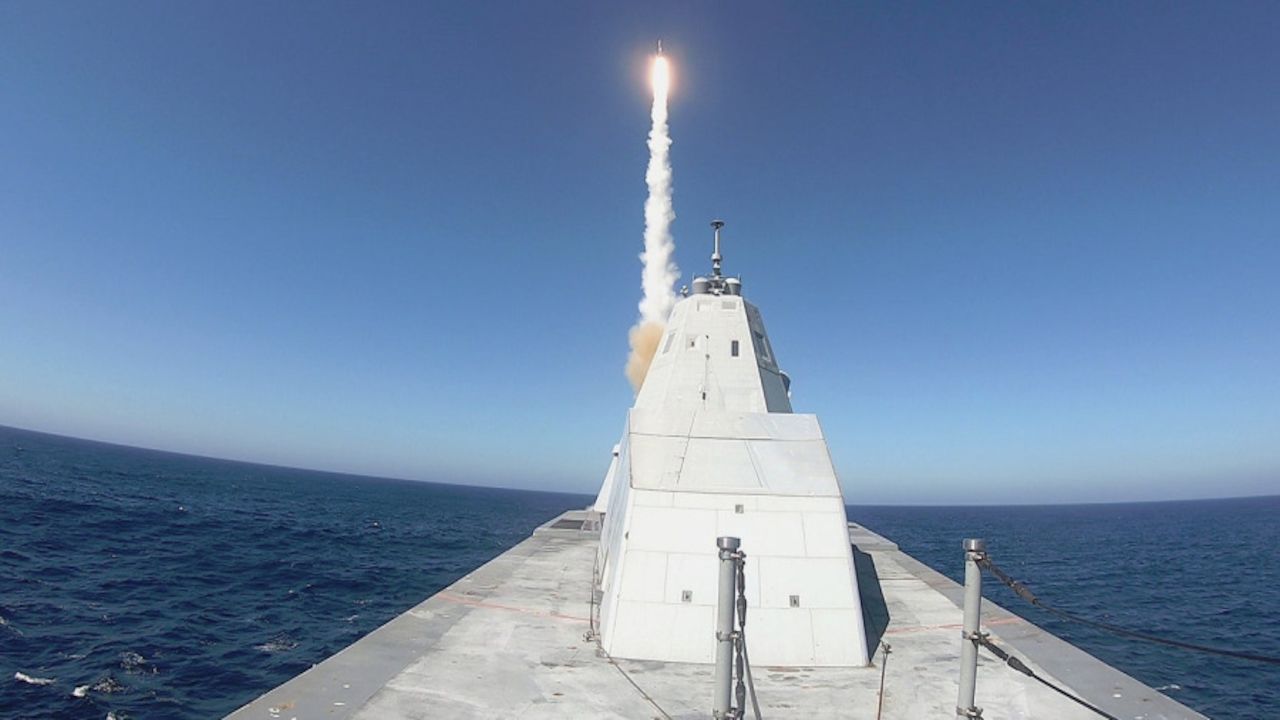 The first-in-class stealth destroyer USS Zumwalt has live-fired a Standard Missile 2, or SM-2, for the first time ever. The Zumwalt class ships, also known by the hull number for the lead ship, DDG-1000, are set to be equipped with a unique variant of the SM-2, also known as the SM-2 Block IIIAZ. The need for this particular missile is tied to several controversial design decisions the Pentagon and the Navy have made over the years to these ships, including those having to do with their radars, which may now be in line to be replaced, something The War Zone was first to report on last week.

Zumwalt fired the SM-2 from one of its Mk 57 Vertical Launch System (VLS) arrays while on the Naval Air Weapons Center Weapons Division Sea Test Range off the coast of Southern California, near Point Mugu, according to an official Navy release. The service said that the missile successfully intercepted a surrogate for an anti-ship cruise missile, but did not offer any additional details at this mock target. The Navy uses various target drones to simulate subsonic and supersonic cruise missiles.

"Today’s successful test not only demonstrates the ship’s capability to fire missiles and conduct self-defense, it is also a significant step toward more advanced combat system testing and operations for our Navy’s most technically innovative warship," Navy Captain Matt Schroeder, the DDG-1000 program manager, said in a statement. "The USS Zumwalt crew and Surface Development Squadron One are working hand-in-hand with the acquisition community to advance this ship’s operational capability."

"Today’s successful firing event is a critical milestone in the maturation of this incredible ship class and represents the culmination of a tremendous amount of hard work and partnership of Zumwalt’s talented crew and the engineers, designers, and programmers helping us to bring her capabilities to the Fleet,” Navy Captain Gary Cave, the destroyer's commanding officer, added in his own statement. “It is a day we’ve been looking forward to and demonstrates the strides we are taking to add combat capability to our surface force."

As it stands now, the SM-2 Block IIIAZ is set to be one of the primary weapons available to the Zumwalt for air and missile defense, in addition to the RIM-162 Evolved Sea Sparrow Missile (ESSM), a smaller missile that can be quad-packed into any of the 80 VLS cells that line the periphery of the ship. The Mk 57 VLS arrays on the Zumwalt class ships are also designed to fire the Block IV Tactical Tomahawk (TACTOM) land-attack cruise missile. There has been talk about eventually integrating the anti-ship Block V Maritime Strike Tomahawk (MST) and variants of the increasingly capable SM-6 missile onto these destroyers, as well.

The basic SM-2 Block IIIA variant also has a limited anti-ship capability, but it's not clear if the Block IIIAZ subvariant has the same functionality. The Block IIIAZs, which the Navy first included plans to buy in its Fiscal Year 2017 budget proposal, have "hardware and software changes to be compatible with the new (non-AEGIS) DDG 1000 radar, combat system, X-band link and Interrupted Continuous Wave Illumination," according to one budget document. These missiles also feature a Joint Universal Weapon Link (JUWL), according to a report by the Pentagon's Office of the Director of Operational Test and Evaluation, which also says the weapon's primary function when employed from the Zumwalt will be "to defeat air threats at longer ranges" than the ESSM.

As the Navy's 2017 Fiscal Year budget request entry notes, the mission systems architecture on the Zumwalt class destroyers, a proprietary Linux-based arrangement known as the Total Shipboard Computing Environment (TSCE), is unique within the Navy. It is not related in any way to the Aegis system found on Arleigh Burke class destroyers and Ticonderoga class cruisers, which effectively prohibited the DDG-1000s from firing missiles from the Standard Missile family prior to the development of the SM-2 Block IIIAZ.

The ship was also originally supposed to have a complex and very capable pairing of two different radars, known as the Dual Band Radar (DBR), to support the employment of various missiles, but these plans were subsequently scaled back as part of a broader and controversial cost-cutting effort. The design of the Zumwalt class destroyers now includes just the AN/SPY-3 radar in lieu of the DBR, though the Navy is now looking at potential replacements and adding Aegis-like capability to the ships, all of which you can read about more in the War Zone's previous piece where we broke that news.

At the same time, while it's certainly a notable milestone that Zumwalt has now live-fired an SM-2 Block IIIAZ missile, it also speaks to the extremely limited capabilities, especially combat capabilities, that this ship still has more than four years after its initial delivery from Bath Iron Works in 2016.

That same year, Congress blocked the Navy from formally accepting the ship until its combat systems were deemed officially activated, something a milestone the service only hit in April of this year.

Even then, Zumwalt did not fire one of 30mm Bushmaster II automatic cannons for the first time until May. The DDG-1000s have two of these weapons in place of a pair of 57mm cannons that were present in the original design plan, another controversial cost-cutting decision.

It's not clear when, or even if, the destroyer will fire either of its 155mm Advanced Gun Systems, either. In 2016, the Navy decided against buying Long-Range Land Attack Projectiles (LRLAP), each one of which was set cost an almost preposterous amount, for these weapons, leaving them without anything to shoot. Recent tests have pointed to the possible use of these guns to fire a new Hyper Velocity Projectile (HVP), but it remains to be seen if that will actually happen.

Other cost-cutting measures have led to the installation of protruding antennas that degrade the stealth shape of the ship's deckhouse. All of this, in turn, has raised questions repeatedly about the actual utility of the Zumwalt class of ships, which the Navy is only buying three of. The total program cost for these three ships and their underlying technologies sits at over $26B today.

The second and third ships, the USS Michael Monsoor and the future USS Lyndon B. Johnson, are still in the process of being fitted out and all three of the destroyers may well see further alterations in their designs before they go out in their first operational cruises.

The Navy presently expects the Zumwalt to reach initial operational capability sometime in 2021. The trio of ships will all be assigned to Surface Development Squadron One, a primarily experimental unit focused on developing and evaluating surface warfare tactics, techniques, and procedures, including working together with unmanned vessels. As such, whatever operational role the three ships may have in the future is still yet to be fully understood.

All told, this recent live-fire test of an SM-2 is an important milestone for Zumwalt toward getting the ship closer to any sort of operational status, but can only also highlight the costly saga of the DDG-1000s and how there is still much progress the Navy needs to make before these ships can realize anything close to their full potential.