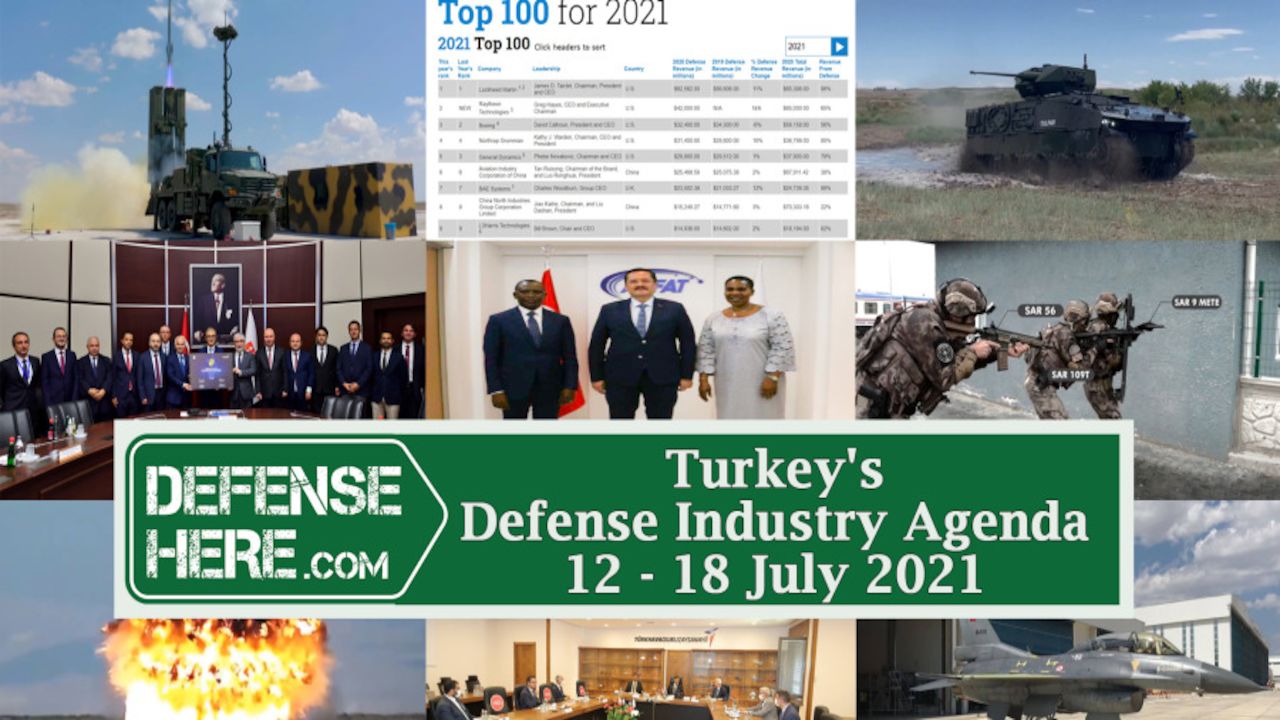 The mass production contract for the Hisar O+ Air Defense Missile System has been signed between the Presidency of Turkish Defence Industries and the ASELSAN – ROKETSAN joint venture.

Havelsan, one of the largest defense industry companies in Turkey which was established on July 13, 1982, celebrated its 39th anniversary.

Togo's Minister of Defense and Veterans Affairs, the Minister of Economy and Finance and their accompanying delegation paid a visit to ASFAT.

Coşkunöz Holding announced its comprehensive transformation process, named CODE 2025, to its employees during a launch event that it has organized.

Masoud Minan, the Ambassador of Bangladesh to Turkey, and his accompanying delegation visited the Turkish Aerospace Inc.

Produced by Otokar, the Tulpar armored fighting vehicle has successfully completed the tests conducted by the Kazakh Armed Forces.

The contract for the GÖKTÜRK Reconnaissance Surveillance Satellite System Development Project has been signed between the Presidency of Turkish Defence Industries and Turkish Aerospace.

The Police Special Operations Training Center, which is located in the Golbaşı district of the Turkish capital, Ankara, used Sarsılmaz-made arms during the training of police officers on operation in residential areas.

Turkish Aerospace announced that it continues to work on the localization of nearly 600 aircraft components in cooperation with around 250 national companies. 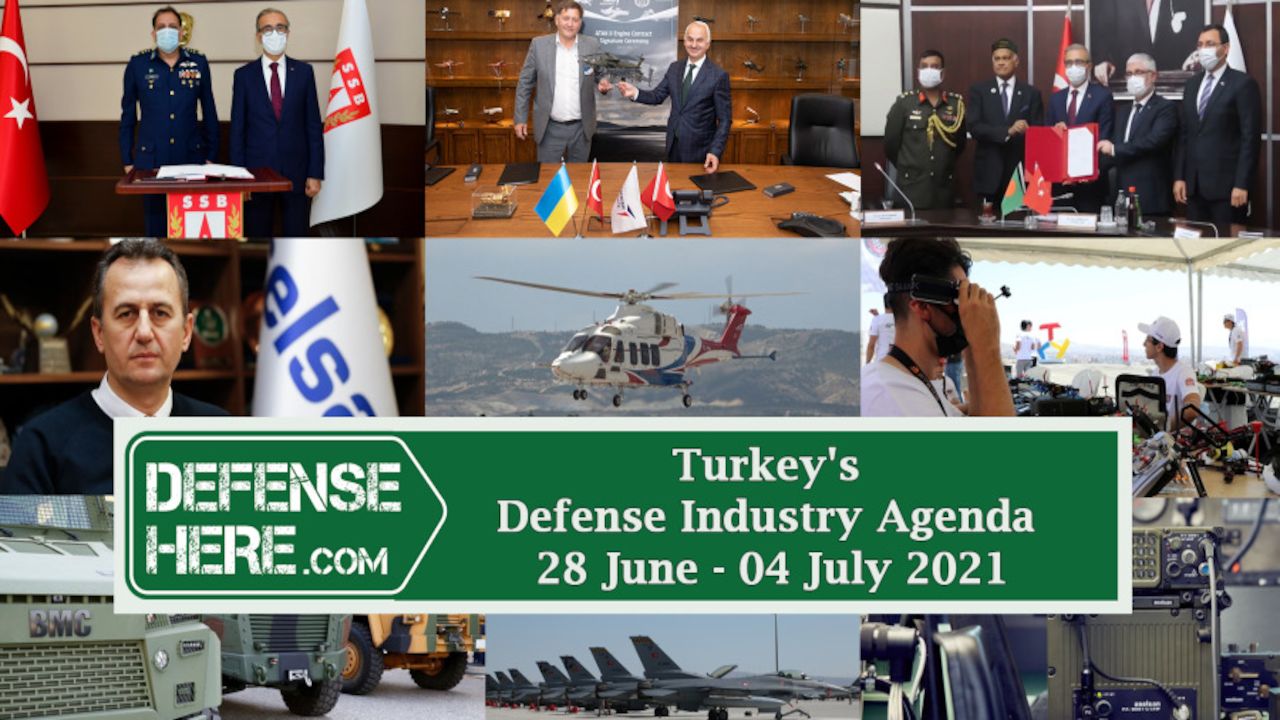 A Press and Distinguished Observer's Day was held within the scope of the International Anatolian Eagle-2021 (AE-21) Training at the 3rd Main Jet Base in Konya.

Haluk Görgün was re-elected as the Chairman of the Board of Directors of ASELSAN.

The first stage of the Turkey Drone Championship, organized as part of TEKNOFEST, kicked off in Elazig.

A delegation from the Pakistan Air Force has visited OSTİM and OSSA in Ankara, and SAHA Istanbul and Technopark Istanbul in Istanbul.

An export agreement has been signed between ROKETSAN and Bangladesh.

The Türksat 5A communication satellite, which was launched on January 8, 2021, has entered service on June 28.

The law, which legislates the decision on turning the Mechanical and Chemical Industry Corporation into a Joint Stock Company, has been published in the Official Gazette.

ASELSAN has signed a $13.3 million contract with an international customer for the export of software-defined radios.

The book titled Turkish Defense Industry History (Periods and Actors 1834 - 2020) has been published by Ötüken Publications.

The 3rd prototype of the Gökbey helicopter has successfully carried out its maiden flight.

The first foreign sales contract of the Vuran 4x4 Armored vehicle, developed in cooperation between BMC and ASELSAN, has been signed with Kosovo.

The Commander of the Pakistan Air Force and his accompanying delegation has visited the Presidency of Turkish Defence Industries (SSB).

The Presidency of Turkish Defence Industries (SSB) has announced that the deliveries of the MPT-76 compatible grenade launchers, produced by ATA Arms, to the Turkish security forces are in progress. 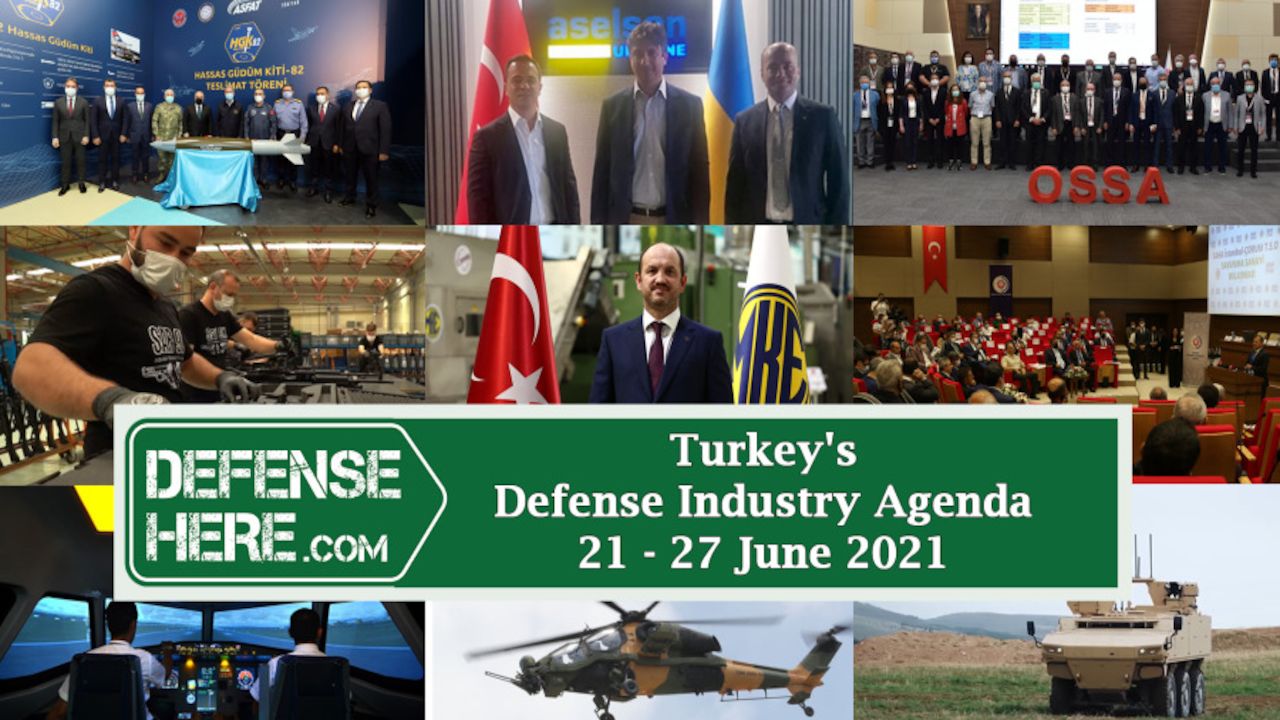 Based in the Turkish province of Konya, ARC Simulator Inc. produced simulators for Airbus's A-320 aircraft.

The first delivery of the Machine Gun PMT 7.62 produced by Sarsılmaz was made to the Gendarmerie General Command.

An option package of 1,8 billion Tl (91.9 million euros) has been included in the short-range/low-altitude air defense system contract signed between ASELSAN and the Presidency of Turkish Defence Industries.

Officials and businessmen involved in Turkish defense industries convened at the Çorum Defense Industry Meeting, held in cooperation between SAHA Istanbul and Çorum Chamber of Commerce and Industry.

The Presidency of Turkish Defence Industries has announced that the qualification tests of the Pars 6x6 amphibious Armoured vehicles developed by FNSS are continuing.

The Committee on National Defence of the Grand National Assembly of Turkey admitted the first 7 articles of the Bill submitted to turn the Mechanical and Chemical Industry Corporation into a joint stock company.

The precision guidance kits, produced with the technical support of TÜBİTAK SAGE under the main contractorship of ASFAT, were delivered to the Turkish Air Force at a ceremony held in Ankara.

Out of 10 companies that spent the most on R&D in 2020 according to a survey named “Turkey R&D”, there was six defense industry companies among which ASELSAN ranked 1st.

TÜBİTAK SAGE has opened an online shopping site where ammunition models and various souvenirs are on sale.

Firing tests of the unmanned ground vehicle developed by ASELSAN, HAVELSAN, Best Grup and Elektroland were carried out during a competition organized by the Presidency of Turkish Defence Industries.

Boeing has awarded Turkish Aerosapce for its performance, quality control and on-time deliveries over the past 12 months.

Yasin Akdere, the General Manager of the Mechanical and Chemical Industry Corporation, has announced that the test firings in line with the 76-millimeter Naval Gun Project are soon to kick off. 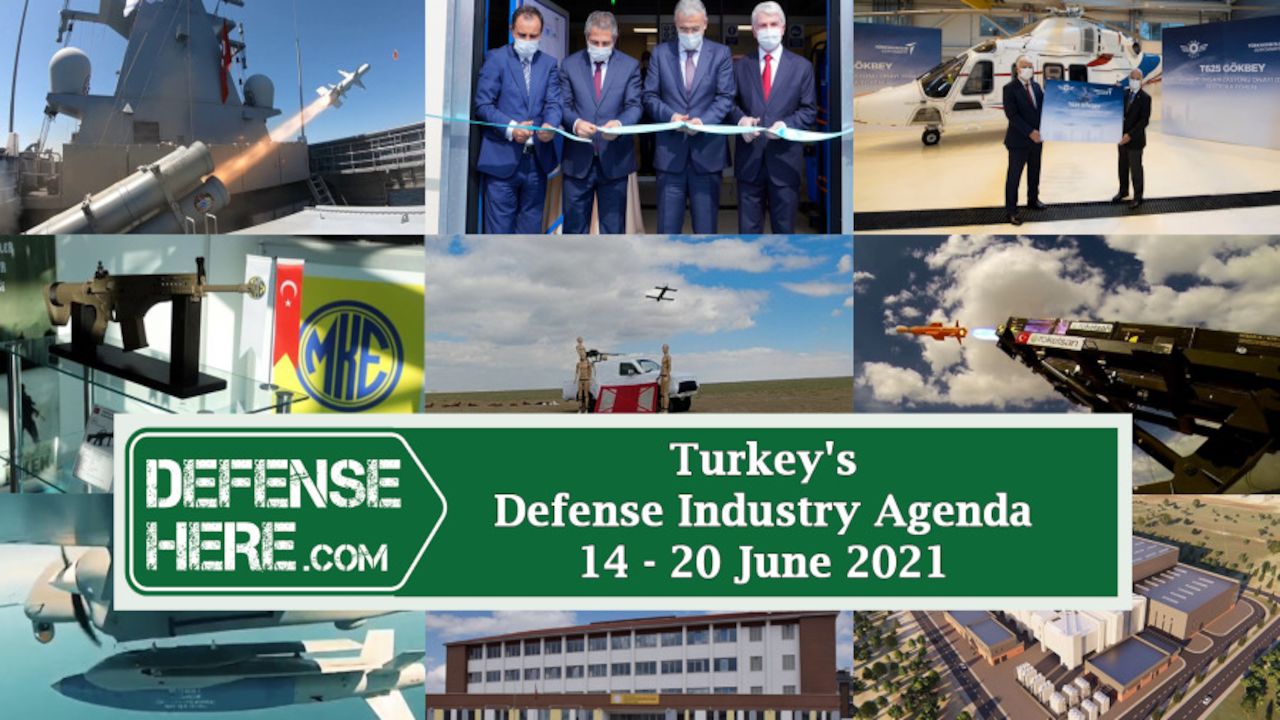 The surface-to-surface anti-ship missile Atmaca, developed by ROKETSAN, successfully hit a ship for the first time after being fired from the TCG Kınalıada corvette.

With the protocol signed between the Ministry of National Education and ASELSAN Konya, it was decided to establish the ASELSAN Konya Vocational and Technical Anatolian High School.

A new generation Aksungur UAV, produced by Turkish Aerospace, entered the service of the General Directorate of Forestry.

A bill regulating the conversion of the Machinery and Chemical Industry Corporation as a company has been submitted to the Turkish parliamentary speaker's office.

The Gökbey helicopter produced by Turkish Aerospace received the Design Organization Approval by the General Directorate of Civil Aviation.

ROKETSAN, which was founded on 14 June 1988 and is one of the top 100 defense industry companies in the world, celebrated its 33rd anniversary. 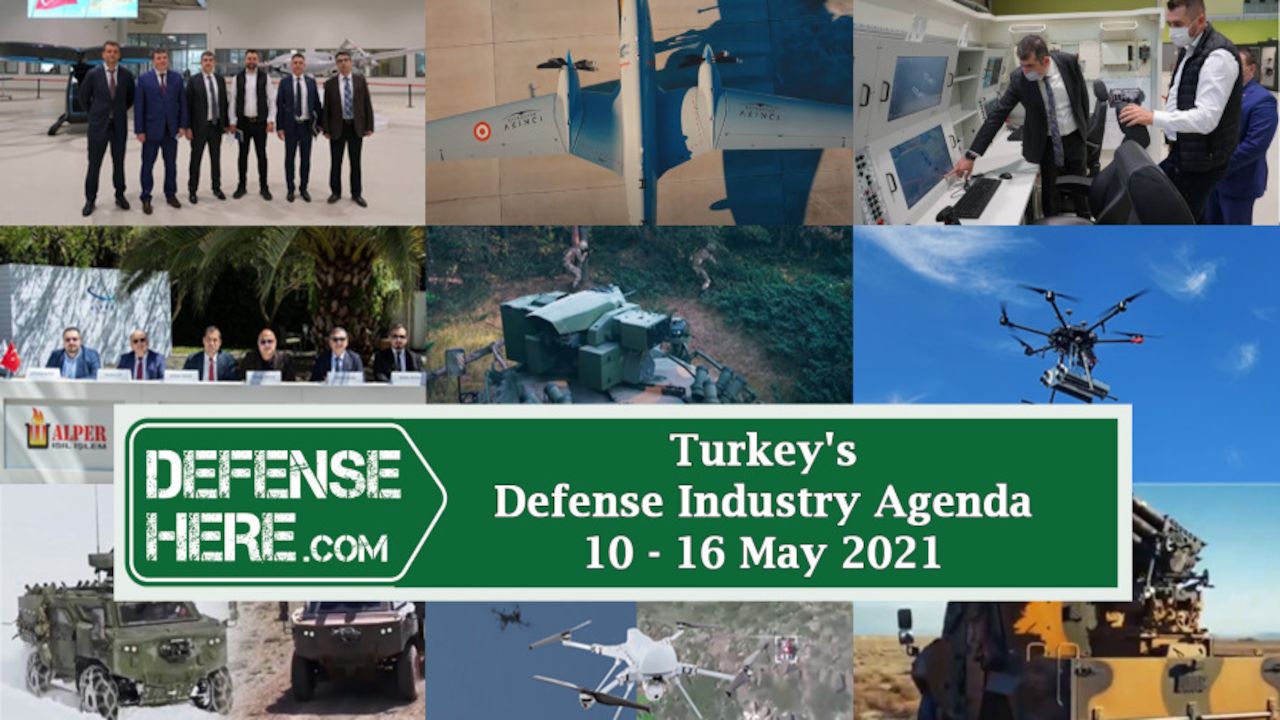 The Kargu kamikaze drones, produced by STM, have been used in the training of the Marine Amphibious Corps of the Turkish Armed Forces.

Members of the Defense Industry Committee of the Verkhovna Rada of Ukraine and officials from the Ukrainian company Ukroboronprom have visited the Turkish military drone manufacturer Baykar.

Turkey based Troy Teknoloji has developed a missile with a diameter of 40 mm with an effective range of 500 meters for use in mini and micro unmanned aerial and ground vehicles.

5 million people have watched the AKINCI documentary, which tells about the development stages of the Turkish AKINCI drone produced by Baykar Defense.

Three large Turkish companies operating in the field of high-tech heat treatment have merged to establish the Alpha Metalurji brand.

The Turkish company Aselsan announced that its remote-controlled weapon systems are being used in 20 countries. 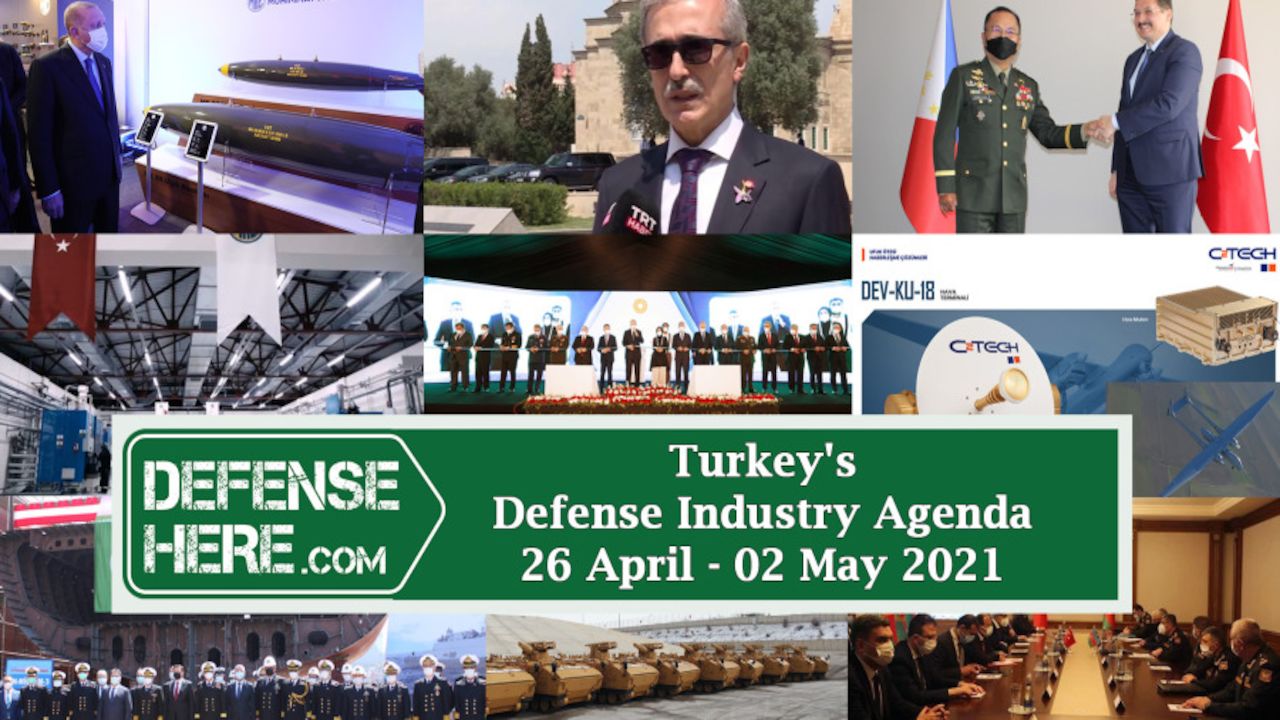 Google analytics showed that Turkey's armed unmanned aerial vehicle Bayraktar TB2 has been googled the most in Armenia over the past 1 year.

The head of the Presidency of Turkish Defence Industries Ismail Demir and his accompanying delegation held various meetings within the scope of their visit to Azerbaijan.

Turkey held a Keel laying ceremony of the third MILGEM Class Corvette being constructed for the Pakistan Navy was held at Istanbul Naval Shipyard.

Mechanical and Chemical Industry Corporation announced that it has succeeded in producing a domestic 155 mm Artillery Modular Charge System.

6 out of 9 subsets were arrested in Turkey over selling data pertaining to defense projects run by the Presidency of Turkish Defence Industries to foreign companies.

CTech announced that its domestically developed satellite communication systems is being used in the Aksungur UCAV as has been used in Anka UCAV.

The head of Presidency of Turkish Defence Industries Ismail Demir told TRT Haber that Turkey's air defense systems have been activated and mass production has begun.

The first firing tests were successfully carried out in line with the Electron Gun Development Project carried out by ASELSAN.

The General Manager of the Mechanical and Chemical Industry Corporation Yasin Akdere informed Turk’s President Erdoğan on the latest weapons and ammunition being developed by the corporation. 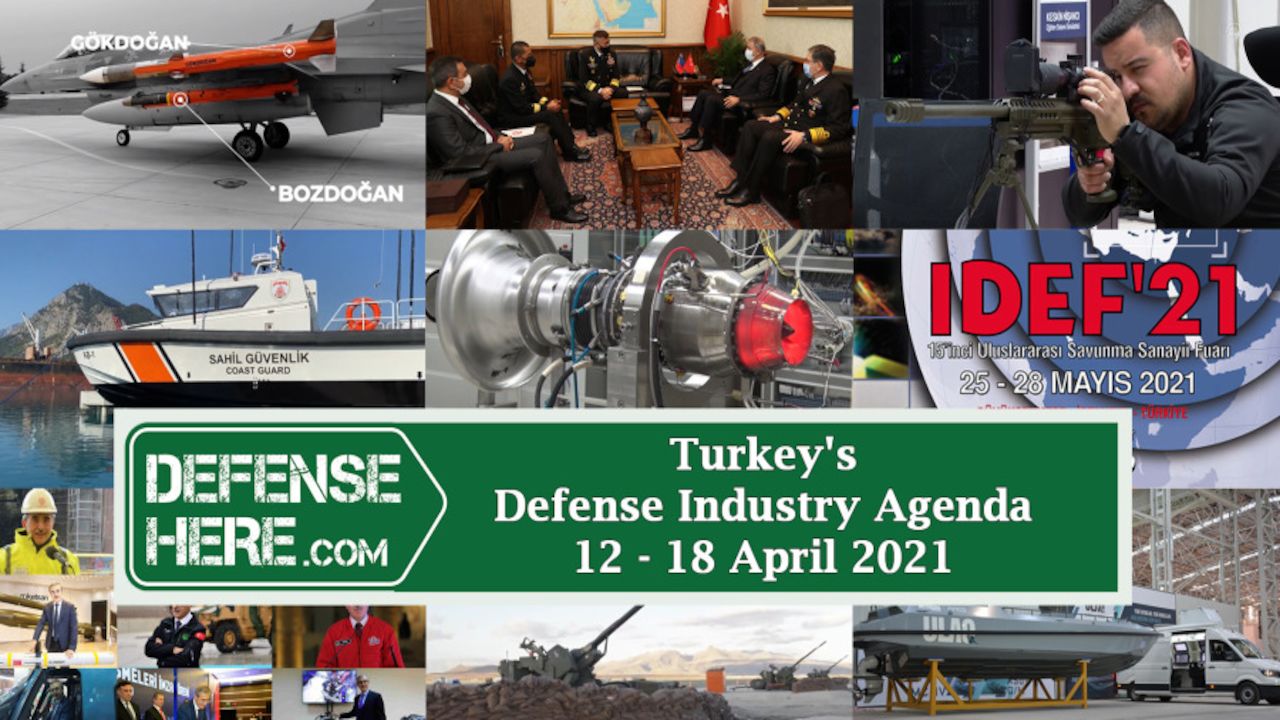 Head of the Turkish Defense industry Presidency Prof. Dr. Ismail Demir has completed seven years in the institution with many successes on his belt including several multi-billion dollars projects.

Turkey’s defense software developer HAVELSAN’s latest Sniper Simulator will be included in the inventory of the Turkish Armed forces at a commando training command center in central-western Anatolia.

The ordinary financial general meeting of the Defense and Aerospace Industry Exporters' Association was held.

Turkey’s shipyard Ares has launched the first coast guard patrol boat. Other 121 similar boats are planned to be manufactured by Ares.

The Visitor Pre-Request Entrance Form of the International Defense Industry Fair IDEF 2021 has been made available on the official website.

Production of the shore control station for unmanned naval vehicle ‘ULAQ’ is completed.

Head of the Turkish Defense Industries Prof. Dr. Ismail Demir has been chosen as bureaucrat of the year in the "Businesspeople of the Year" survey organized by the Economist Magazine. 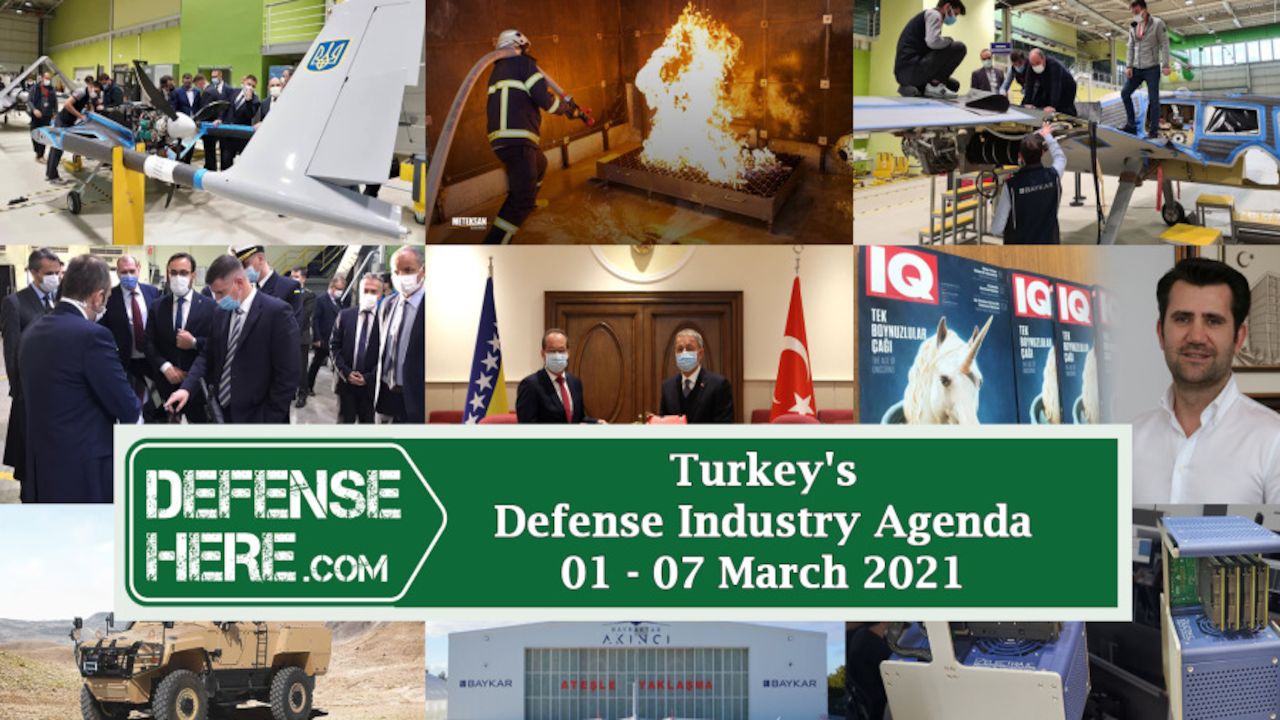 Technopark released their first issue of IQ, a new magazine focusing on entrepreneurship, innovation and technology, in March. IQ will be published quarterly both in Turkish and English.

A training course on BAYKAR Defense’s AKINCI Assault Unmanned Aerial Vehicles has been kicked off.

Military Financial Cooperation Agreement was signed between Bosnia and Herzegovina and Turkey.

Minister and Deputy Minister of Industry and Technology Mustafa Varank and Mehmet Fatih Kacır paid a visit to Baykar Defense.

Meteksan Defence won a tender for the construction of the firefighting training simulator complex of Turkey’s Akkuyu Nuclear Power Plant.

TAI was chosen as the "Defense Industry Company of the Year" at the Boğaziçi Business World Awards, with the votes of Boğaziçi University students.

Financial support for the Materials to be provided to the teams participating in TEKNOFEST has been increased to over 7 million TL.

The Commander of the Ukrainian Navy and his accompanying delegation paid a visit to Baykar Defense. 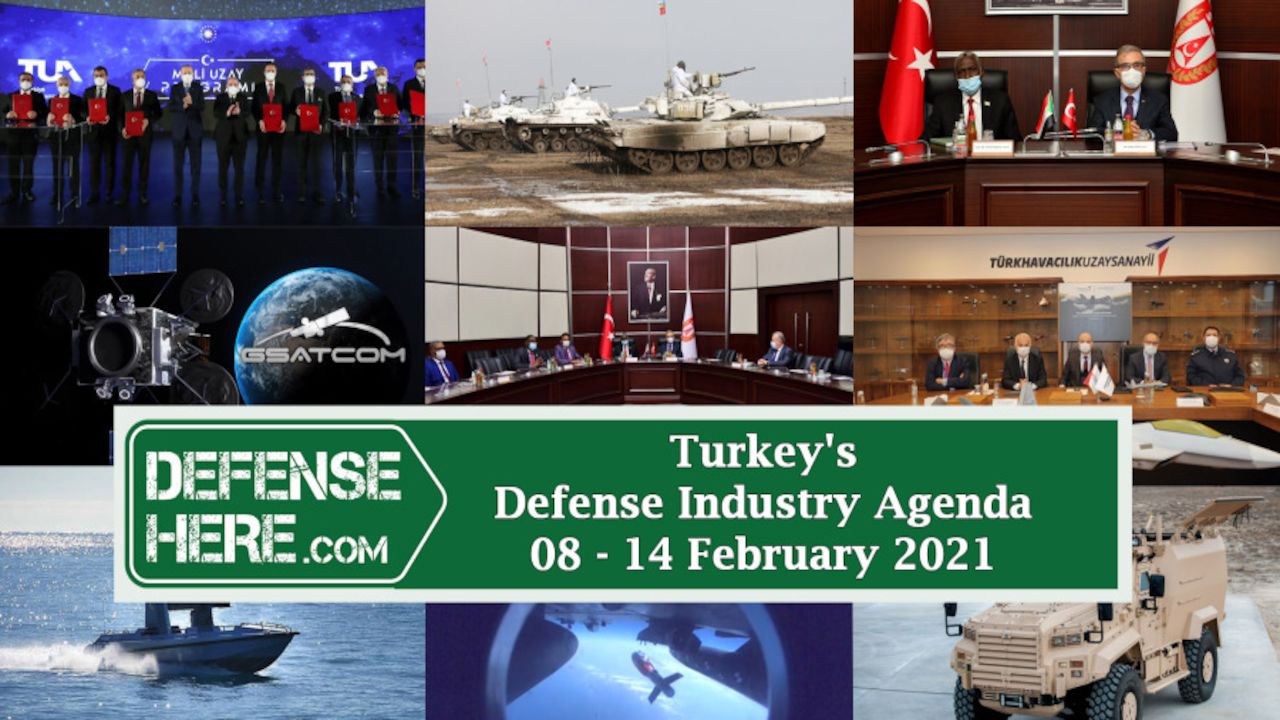 New deliveries of the KGK Wing-Assisted Guidance Kit, developed by TÜBİTAK SAGE, have been made to the Turkish Air Force.

Sudan’s Minister of Defense Yassin Ibrahim Yassin and his accompanying delegation visited the Ministry of National Defense and the Presidency of Defence Industries.

It has been announced that GSATCOM Inc., a Turkish Aerospace subsidiary, will export communication satellite technologies to Argentina.

The Turkish President Erdogan unveiled Turkey’s road map for the next 10 years in space field during the introductory meeting of the National Space Program.

In coordination with the Turkish Space Agency, Turkish Aerospace Inc., Türksat and TÜBİTAK Space, signed a protocol on “the establishment of a National Satellite Manufacturing Company".

The services provided by TRtest company have been included in the KOSGEB R&D, P&D and Innovation Support Program.

The eighth C-130E/B aircraft, which its modernization and test flights were completed by Turkish Aerospace Inc., within the scope of the ERCİYES Project, has been delivered to the Turkish Air Force.

TAI and TRMOTOR signed a protocol on developing domestic power units within the scope of the National Combat Aircraft Project (TF-X). 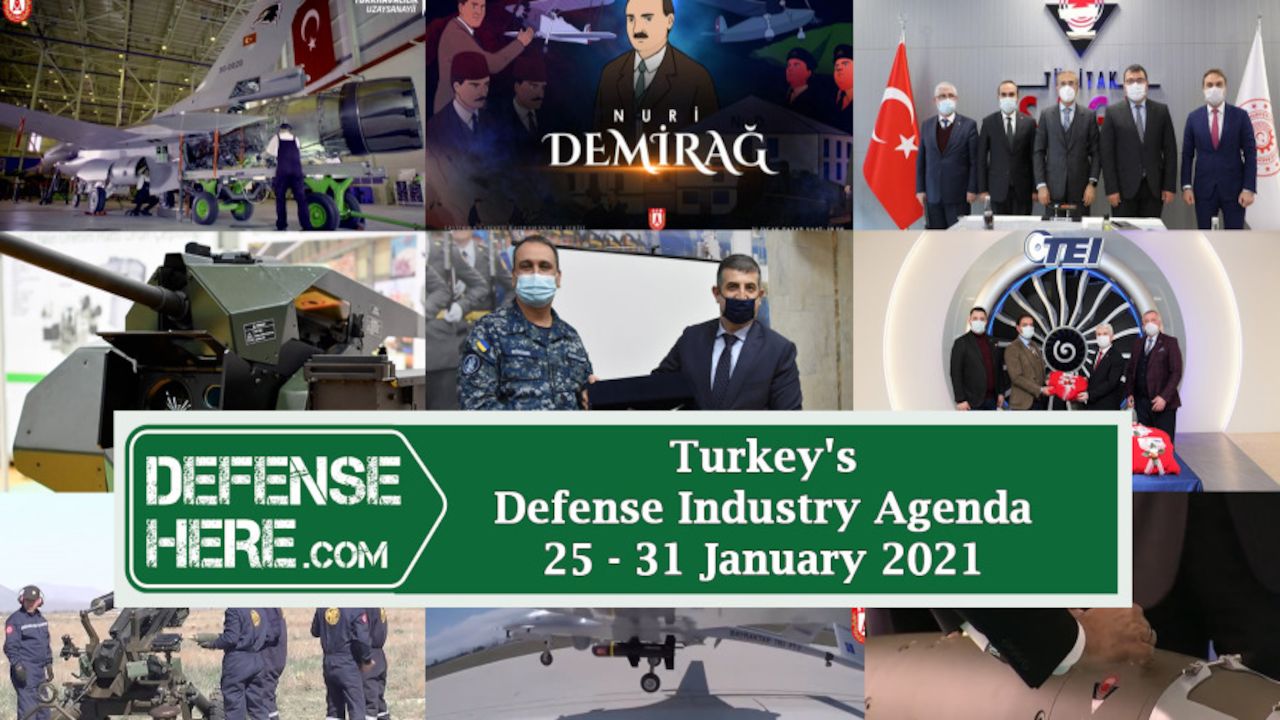 Of which 3000 units have been produced by ASELSAN so far, the Sarp Weapon System was exported to a European country for the first time in 2020. The number of countries Sarp serves has gone up to 6.

The General Manager of Baykar Defense Haluk Bayraktar met with the Ukrainian Naval Forces Commander and introduced Bayraktar TB2 to the navy personnel.

The new deliveries of the HGK-82 guidance kits, produced by TÜBİTAK SAGE and which provide Mk-82 unguided general-purpose bombs with precise strike capabilities, have been made.

The new MAM-L Micro Smart Ammunitions developed by ROKETSAN were delivered to the Turkish Armed Forces.

The third episode of the animated film series "Defense Industry Heroes" prepared by the Presidency of Turkish Defence Industries, which discussed the life and struggles of "Nuri Demirağ" was released.

The President of the Presidency of Turkish Defence Industries İsmail Demir stated that within the scope of the F-16 Structural Improvement Project, Turkish Aerospace continues to work on increasing the life of the F-16 Block 30 aircrafts from 8000 hours to 12000 hours.