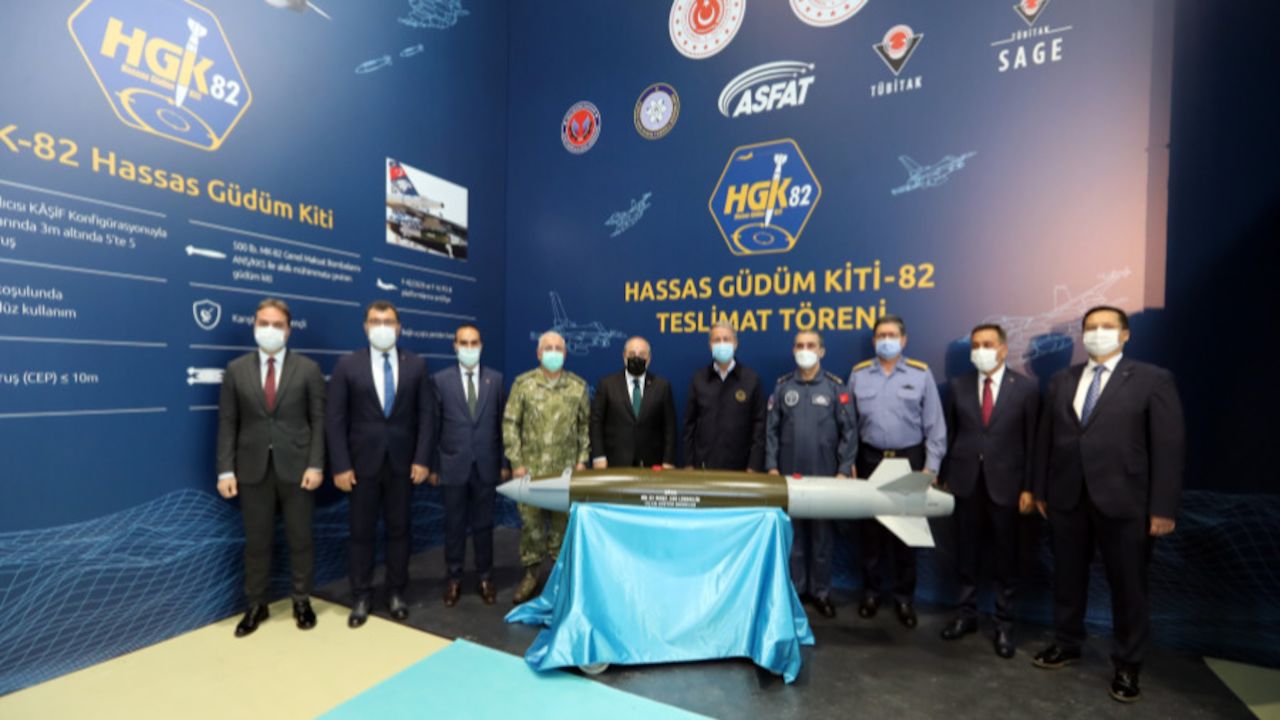 The Turkish defense industry on Thursday took delivery of a batch of locally developed Precision Guidance Kit-82s (HGK-82) during a ceremony held at the Etimesgut 3rd Air Maintenance Factory in the capital, Ankara.

Industry and Technology Minister Mustafa Varank said that these HGK-82s are the first batch completed within the scope of the kit production project of 1,000 pieces in total carried out in partnership with state-owned defense firm ASFAT and the Scientific and Technological Research Council of Turkey (TÜBITAK).

“Hopefully, all of them will be delivered by August 2022,” the minister said during the ceremony that he attended together with National Defense Minister Hulusi Akar and TÜBITAK Chairperson Hasan Mandal.

The HGK-82 was developed by TÜBITAK’s Defense Industries Research and Development Institute (SAGE) and the initial deliveries were made in cooperation with another local defense giant, Aselsan.

Varank noted that these kits turn general-purpose bombs into smart munitions that can operate in all weather conditions day and night with their guidance technology. Unlike previous deliveries, the first domestically produced GPS receiver, Kaşif, has been integrated into the newest batch.

“This is a very important development that will decrease dependency on abroad,” he said, adding that providing the 3rd Air Maintenance Factory Directorate with HGK production capability is another important issue that should be emphasized.

TÜBITAK SAGE, Varank said, is one of the institutions that “started the national smart munition and national missile revolution in our country with its capacity and capabilities.”

The institution has enabled Turkey's first bunker-busting bombs and first national cruise missiles to become integrated into the arsenal of the Turkish Air Forces.

"We continue to work on Bozdoğan and Gökdoğan, Turkey's first national air-to-air missiles, which will increase our military's air dominance,” Varank said. He also stressed that they attach special importance to the localization of the subsystems of these munitions, with the integration of Kaşif being one of the steps taken in this regard.

The defense industry was designated as one of the focus areas in the 2023 Industry and Technology Strategy, the minister emphasized, which they prepared in the light of the “National Technology Move.” The industry has been working non-stop towards its 2023 goals with public-university-private sector cooperation.

Drawing attention to the importance of competitiveness in the defense industry, Varank said they are working on increasing competitiveness through public-private sector cooperation, which makes organized industrial zones (OIZ) and specialized OIZs established with the support of the ministry particularly important.

The Kırıkkale Arms Industry Specialized OIZ in central Turkey, the Ankara Space and Aviation Specialized OIZ and the Technology Industrial Zone in central Konya province are projects that “will fill important gaps for our defense industry,” the minister said. “The clusters in these regions will perform an important task, especially in reducing costs and increasing efficiency.”

Meanwhile, during the delivery ceremony, Defense Minister Akar revealed the name of the national ramjet-engine air-to-air missile for the first time. That missile is named “Gökhan,” and is another project undertaken by TÜBITAK SAGE.