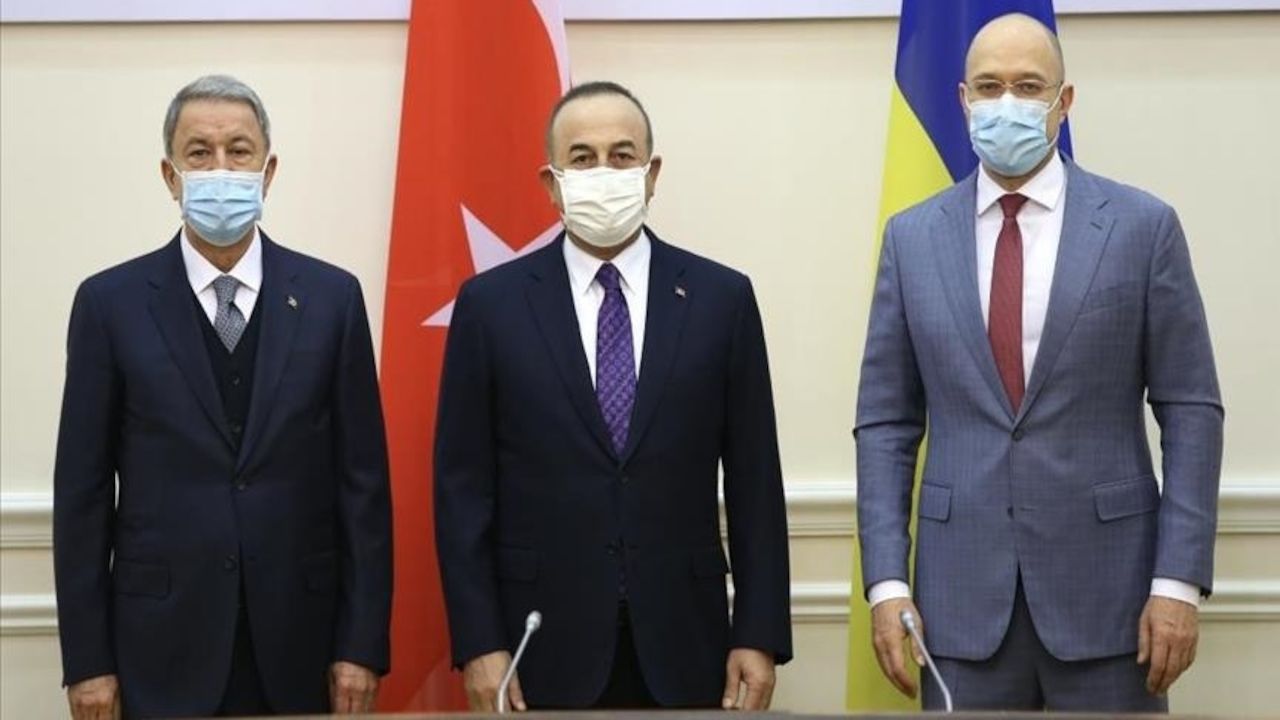 Turkey's foreign and defense ministers met Ukrainian prime minister on Friday as part of a two-day official visit for preparations of the 9th Turkey-Ukraine High-Level Strategic Council meeting and to attend the “Quadriga” meeting.

Speaking at the meeting, Hulusi Akar said Turkey and Ukraine have had strategic partnership relations since 2011, and stressed that the bilateral relations are "excellent".

Turkey supports Ukraine's integration into Euro-Atlantic institutions, Akar noted, highlighting the significance of ensuring security and welfare of Crimean Tatars as well as protecting their rights and interests.

Referring to bilateral cooperation in the defense industry, Akar said that if this increasing cooperation becomes more advanced in the coming period, it will benefit both Turkey and Ukraine.

"Had a fruitful meeting with PM Denys Shmyhal of Ukraine. Our trade volume is nearly $5 billion; our goal is $10 billion. Free Trade Agreement will help to reach this goal," Cavusoglu said on Twitter.

"Will further our cooperation in every field from energy to defense industry," he added.

After the meeting with the Ukrainian prime minister, Cavusoglu and Akar also met Ahiska and Gagauz Turks living in Ukraine.

They also met Halit Cevik, the head of OSCE's Special Observation Mission to Ukraine. During the meeting, the latest situation in Ukraine's eastern Donbass region was discussed, Cavusoglu said on Twitter.

Underlining that Turkey’s ambassadors who presided the mission since the beginning fulfill an important task, Cavusoglu said: “Donbass must be resolved diplomatically and Minsk Agreements must be fully implemented."

On Friday, the defense officials of the two countries also signed agreements on unmanned aerial vehicles and Ada-class corvettes, Ismail Demir, the head of the Turkish Defense Industries Presidency wrote on Twitter.

Under the procurement deal, Ukraine aims to strengthen its navy in order to boost security in the Black Sea and the Sea of Azov.

In October, speaking to Ukraine’s parliament, President Volodymyr Zelensky touted the current level of cooperation between his country and Turkey, including in technology and the defense industry. Zelensky also stressed that Kiev’s relations with Ankara have reached unprecedented levels.

In February, Turkish President Recep Tayyip Erdogan had paid a visit to Zelensky in Kiev. Under an agreement signed during the visit, Turkey pledged to provide 205 million liras ($25.8 million) to help Ukraine meet its defense needs.

The two countries also agreed to work to boost bilateral trade volume, initially to $10 billion and then to $20 billion, significantly higher than the $5 billion seen in 2019.

The leaders also called for negotiations on a free trade agreement that have been ongoing since 2012 to be concluded this year.