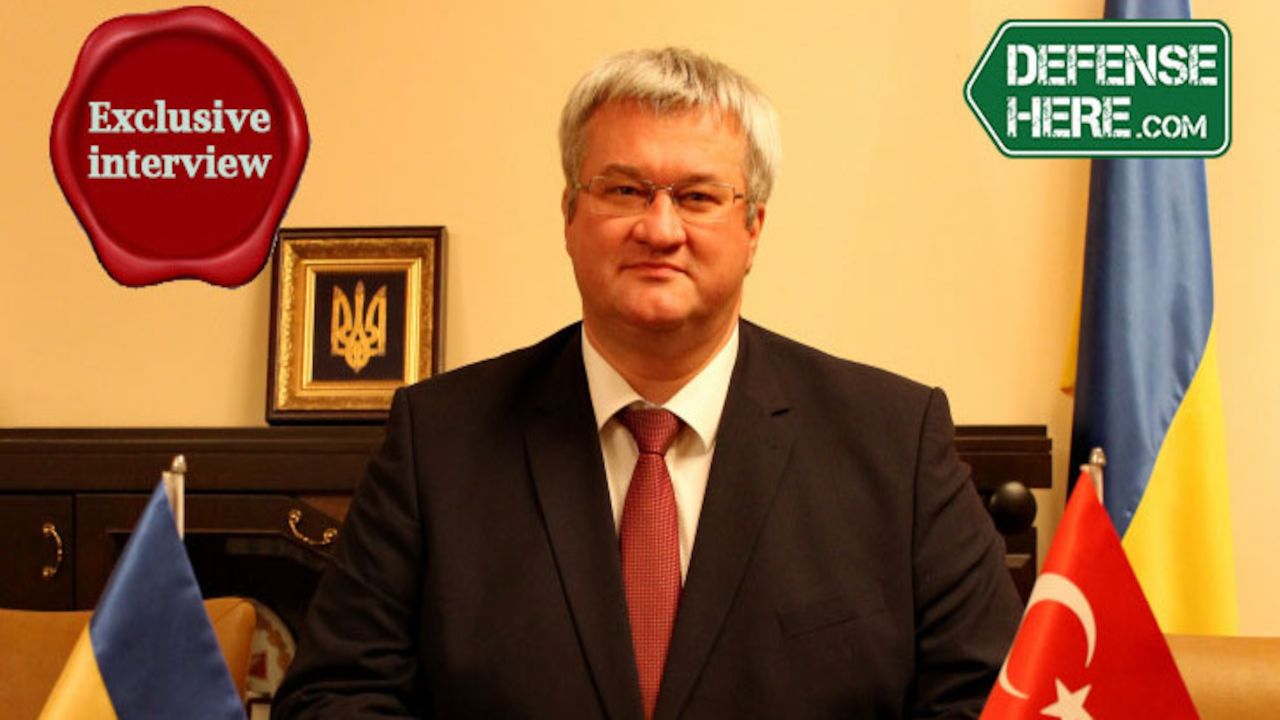 In an exclusive interview with Defensehere, the Ukrainian Ambassador to ankara Mr. Andrii Sybiha touched on the strong defense industry and military relationships between Turkey and Ukraine.

Mr. Sybiha talked about different joint-projects that are subject of negotiations between both countries and stress on the massive potential that both countries have for joint production of aircraft and unmnanned aireal vehicles.

In the written interview Mr. Sybiha replied to the following questions:

Can you evaluate Turkish defense industry companies and their products?

When we look at the recent developments that took place in Turkey during my service time there, we can clearly tell that Turkey is a world leader in creating the conditions for the development of its defense industry and for the companies that operate in the field.

It is interesting to see the number of Turkish defense industry companies that managed to enter the Defense News Top 100 list for the last year, which is one of the most prestigious lists in the field of defense industry.

The number of the companies that managed to secure a place in the list increased to 7 in 2020 with ASELSAN, TAI, BMC, ROKETSAN, STM, FNSS and HAVELSAN, and the number increases each year.

Ukraine celebrates its Turkish friends for reaching such a prestigious position and deserved place in the field of high-tech military technical production. The level the Turkish Defense Industry has reached, proves Turkey’s wise management in this sector to the world.

My personal opinion is that; Turkey is one of the best examples for other countries to follow in successfully coordinating country resources and private sector companies with the correct deployment of technology in reforming defense industry.

However, I believe that our countries will achieve even more success in the field of defense industry, since both Turkey and Ukraine have incredible potential. The mutually technology transfer that the Ukrainian and Turkish companies are ready to carry alongside their years-long experience will undoubtedly bring success.

At what level now is the cooperation between Ukraine and Turkey in the field of defense industry?

The historical adventure of the cooperation between Ukraine and Turkey and taking into account the current situation, I always say the following sentence: "Our cooperation starts from underground resources and expands to space."

The relations of both countries in regards to the sector of defense industry are developing according to the classic "win-win" formula, and it is only a matter of time for the defense industry companies of our countries to take their worthy place in the world's TOP 100 Leaders List.

In my opinion the success of the Ukrainian-Turkish cooperation stems from the fact that it focuses on unifying the potential of both countries in joint research, in found joint-ventures as well as establishing joint production infrastructures, rather than just focusing on arms and military equipment trade between the two countries. Focusing on joint development and production of innovative technologies will reinforce this success.

However, our cooperation doesn't pose any threats to third countries, but rather aims at increasing the defense opportunities of the two countries and ensuring the security of the Black Sea region.

We can say to the forefront of the technological potential of Ukraine and Turkey's own defense industry by looking at the development strategy of air and space area of mutual strategic cooperation should take the leading role.

By looking at the outstanding technological potential of Ukraine and Turkey’s strategy for developing its national defense industry, we can conclude that the mutual strategic cooperation between the two countries in the field of aerospace technologies should take a complementary role to both sides.

I wish to see Antonov’s An family of aircrafts produced in Turkey in the coming years.

Cooperation in military and defense industry technologies between Ukraine and Turkey has recently reached new levels, continuing to be one of the key elements of strategic cooperation between the two countries.

The remarkable production capacity and scientific-research data base of both Ukraine and Turkey are complementary to each other, which results in them being key-partners.

The cooperation between Ukrainian and Turkish defense industries covers key business and strategic areas such as; aviation, space, land systems, shipping and shipbuilding as well as special equipment and tool production.

In the last few years, cooperation agreements have been made in areas such as land and air platforms, composite materials, avionic systems and ammunition.

Various projects are being carried out to equip the Ukrainian Armed Forces with communication systems produced by the Turkish company "ASELSAN".

Turkish armored vehicles are modernized with active protection systems, dynamic armors and guided ammunition, that are produced in Ukraine.

Cooperation talks on the production of engines for Turkish unmanned aerial vehicles and other areal platforms are also actively in progress.

I would also like to highlight the products of the Baykar Defense company. The drones produced by this company have shown that they are extremely effective in regional conflicts in Libya, Syria and Nagorno-Karabakh.

We would like to thank the Turkish government and Baykar defense’s board of directors. Because while Ukraine was going through a very difficult period of time, no country other than Turkey provided military support to the Ukrainian Armed Forces; where Turkey provided a significant number of unmanned aerial vehicles to Ukraine. Ukraine was the first foreign country to purchase the Bayraktar TB2 unmanned aerial vehicle systems. While being one of the most comprehensive agreements in the extended relations between the two countries, this agreement has taken our relations to a completely new level. However, our work towards that direction is gradually improving. Within the framework of our latest agreement, the engines of the Akinci UCAVs will be produced by Ukraine. In addition, both parties are still in talks regarding the manufacturing of the Ukrainian engines in Turkey as well as the manufacturing of the Turkish UAVs in Ukraine.

Another promising topic is the joint production of armored vehicles’ engines. As of today, the partnership between the two countries in the fields of aviation, space and defense industry, continues with more than 30 joint-projects.

The Turkish delegation visited the production facilities and held meetings with the managers of state institutions in the Dnipro region, such as the KB 'Pivdenne' and 'Pivdenniy Mashinobudivniy Zavod' (Southern Machine-Building Plant).

Taking into account the demands of the Missile Technology Control Regime, the parties agreed to develop bilateral cooperation agreements on satellite technologies, space launch systems and Infrastructure, joint processing and use of space information/data as well as the exchange of experts in the field of rocket science and space and providing them with training programs.

How does the relation between Ukraine and Turkey in the field of defense industry affect other sectors?

If we consider the immense trust both parties have for each other as well as the existing cooperation experience, also the readiness of both parties to share their technologies unlike other potential partners and the fact that strategic partnership in the fields of defense industry and aerospace is one of the key elements of the highest political level negotiations between both countries, then undoubtedly defense industry affects all the sectors on the agenda of the political dialogue between our countries.

You can also find the interview in Ukrainian by clicking on the following link: