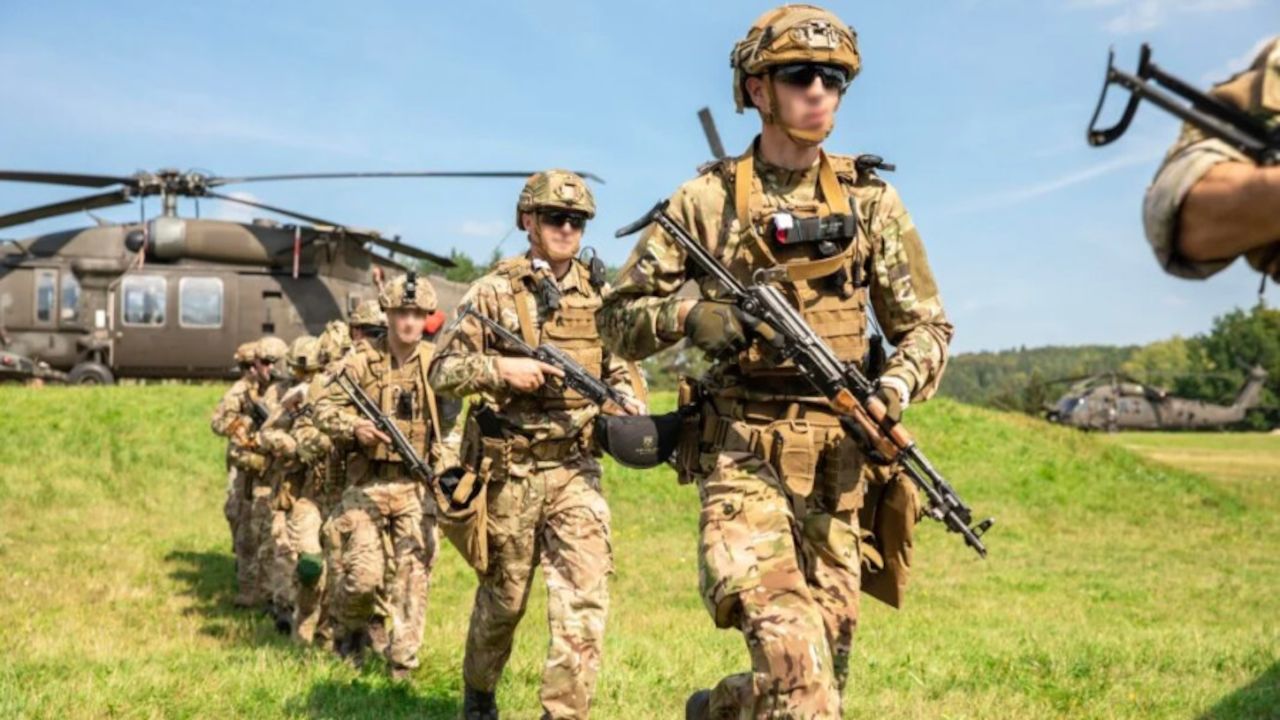 More than 3,500 multinational partners from across Europe joined together for Exercise Combined Resolve 14 at the JRMC in Hohenfels, Germany, September 2020 to strengthen interoperability between allied and partner nations. This also included approximately 160 Special Operations Forces (SOF) and the Lithuanian National Volunteer Force (KASP).

While strengthening bonds and abilities between nations, it was also the evaluating readiness exercise for the U.S. Army 2nd Armored Brigade Combat Team.

CBR XIV started with a meeting between the Ukrainian SOTG Commander and Col.
Terry Tillis, the Commander of the 2nd Armored Brigade Combat Team (ABCT), to set the standards and conditions for the rest of the exercise. One of the first hurdles to overcome was the integration of SOF and conventional forces. In an exercise this large, there are some concerns when dealing with so many countries.

“I’ve been attached to Ukrainian Special Operation Forces (UKRSOF) to train, advise and assist,” said a U.S. Army SOF Commander. “I was very concerned if they were going to be able to connect with the NATO Conventional Forces (NCF).”

“Between the liaison officers and key leader engagements, from the start, the issue was completely overcome,” said a U.S. Army SOF Commander. “Having the Brigade Commander meet the SOTG Commander face to face as well as capability briefs from the LNO to the Brigade, it was quickly demonstrated what URKSOF could do for the Armor Battalion and that UKRSOF was going to be their eyes during the exercise.”

The NATO conventional forces and SOF integration briefings provided insight, but the execution of the tactics also increased in complexity.

“One of the biggest takeaways from this exercise for us has been conducting more complicated tastings,” says the Ukrainian SOTG Commander. “Tasks like destroying objectives and taking out enemies but doing it in a more complex way by using air components, artillery, and while working with Conventional Forces.”

“Here at JMRC, everything was very nice and well-prepared in regards to having different enemies and High-Value Targets for our SOTU’s and lots of different ways to infil and exfil our SOTU’s like helicopters, non-tactical vehicles and tactical vehicles.” said the Ukrainian SOTG Commander.

Knowing they would face plenty of challenges on and off the battlefield, the Ukrainians came prepared to tackle one challenge fast- they came with many English speaking soldiers.

“We came into this one thinking that the biggest barrier would language capabilities, but were very surprised when they grabbed some cadets from several universities who have very high language proficiencies to supplement their English deficiencies,” said a U.S. Army SOF Commander. “They quickly overcame that barrier.”

CBR XIV was also a NATO Response Force Validation (NRF) for both the Ukrainian Conventional and Special Operations Force. Launched in 2002, the NRF is a highly ready and technologically advanced multinational force made up of air, maritime, and SOF elements. This multi-capable force can quickly deploy wherever needed and react in a very short time, to a full range of security challenges.

“For them, this exercise is on their pathway to NRF,” says a U.S. Army SOF Commander. “Our Detachment weapons sergeant and I, came up here to train, advise and assist through a staff decision-making process and the execution of a mission, to see that they are operating in NATO structure, utilizing NATO doctrine, and able to coordinate and operate with other NATO
forces.”

Over the course of the exercise, the SOTG assigned a number of missions down to their Special Operations Tasking Unit which included Sensitive Sight Exploitation, Special Recon, Direct Action, and assisting in simulated downed pilot recovery missions.

In the end, CBR XIV proved to be a successful exercise for both Conventional and Special Operation Forces. These countries will now take what they have learned back to their homes.

At the end of the exercise, the Ukrainian SOTG Commander expressed how well the overall exercise helped future operations.

“It’s a good opportunity, for my soldiers and myself, we are really happy to take part in the international exercise. It will help us to conduct our missions in the near future, and if it’s
possible we, would like to take part again in this exercise next year or maybe in another
exercise in a different part of Europe.”