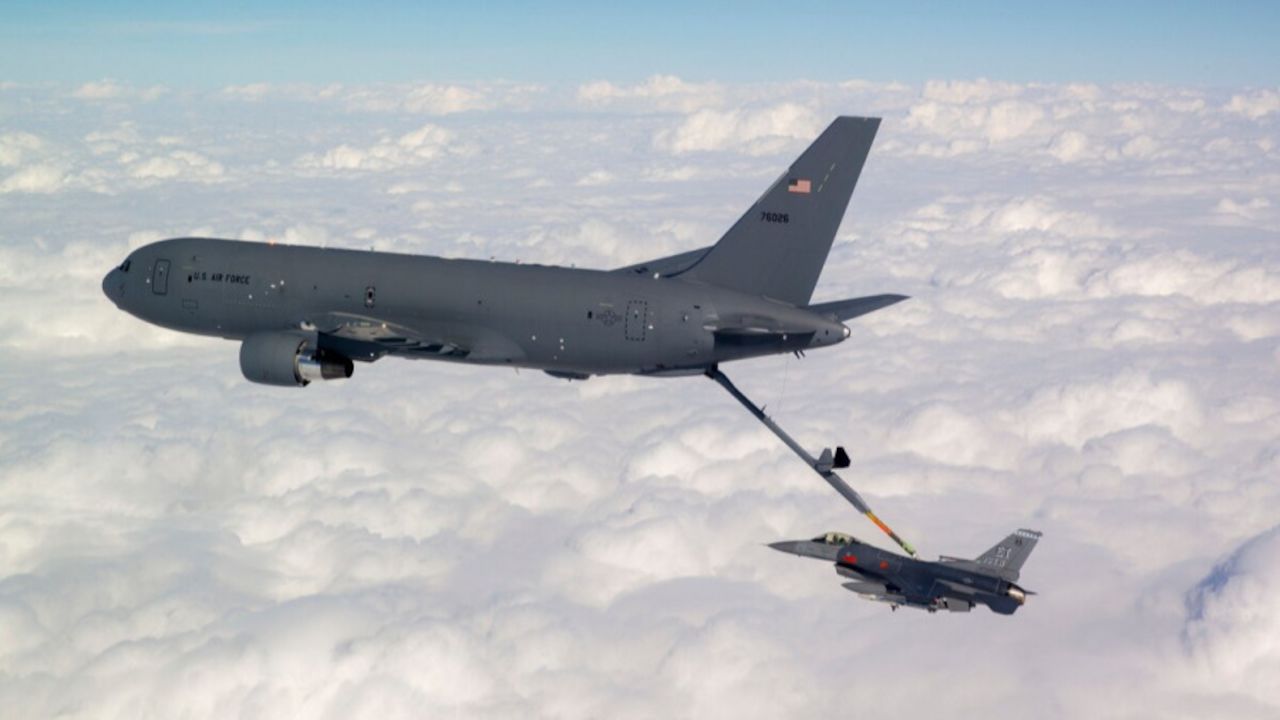 Two of the KC-46 aerial refueling tanker’s major technical problems may be in the rearview mirror.

The U.S. Air Force on Feb. 1 announced it closed one of the Boeing-made aircraft’s six category 1 deficiencies — which indicate problems that impact operations or pose a safety risk — and downgraded another to the lesser category 2 status.

The two issues both revolve around components for the KC-46′s Auxiliary Power Unit, or APU, which is manufactured by Honeywell. The first deficiency was logged after the Air Force documented APU duct clamps, which are located inside the tail of the aircraft, were becoming loose or cracking, Gen. Jacqueline Van Ovost said during a roundtable with reporters.

The second problem involves the APU drain mast, which Van Ovost characterized as “a small metal piece that’s outside of the back of the airplane” that was not properly welded and would come loose during flight.

Ultimately, Boeing developed a new riveted duct clamp design similar to those used in the Boeing 777 fleet, the service said in a statement. After the Federal Aviation Administration certified the new part, the Air Force began retrofitting its KC-46s with the new duct clamps in October. Boeing has also started producing KC-46s with the new clamps on its line in Everett, Washington.

“We worked with Boeing, they had an engineering fix, and they not only found the fix and] tested it but about 70 percent of the fielded fleet have already been retrofitted, and the rest will be done very shortly,” Van Ovost said.

The Air Force in a statement said that the issue is no longer driving aircraft downtime or additional maintenance, and Van Ovost added that she is confident the new clamps will solve the problem.

Boeing has also come up with an improved version of the drain mast, which is currently going through testing.

“They are working through the retrofit option right now,” Van Ovost said. “All of the airplanes that are flying right now and doing our testing, they all have that modification. And everything seems to be going well. So … our engineering team has authorized to take that one off the list.”

The KC-46 has four remaining category 1 deficiencies: two involving the Remote Vision System that are expected to be resolved when a new version of the system is rolled out in 2023; a problem with the stiffness of the air refueling boom that keeps it from being able to refuel some of the planes in the service’s inventory; and an issue with fuel leaks.

Boeing is locked into paying for all technical problems that cause it to exceed the $4.9 billion ceiling on the firm, fixed-price contract it signed in 2011. Thus, the company is financially responsible for fixing all deficiencies except for the boom issue, which is a change in the Air Force’s requirements. So far, Boeing has racked up more than $5 billion in charges.

The Air Force intends to buy 179 KC-46s and has amassed 42 so far. However, because the KC-46 is unable to fly in an operational capacity due to the number of deficiencies, the Air Force has opted to slow the transition of aircrews from legacy tankers to the KC-46, and is only accepting two aircraft from Boeing per month.

“It’s not just about iron. To get full operational capacity, it is about aircrew training, it’s about maintenance crew training, our logistics support training and equipment. It’s about our global supply chain around the world where we’re going to be supporting these airplanes as they land. And it’s about our facilities and our depot maintenance,” Van Ovost said. “For right now, I don’t need to be in a hurry to take them at a faster rate than about two a month.”