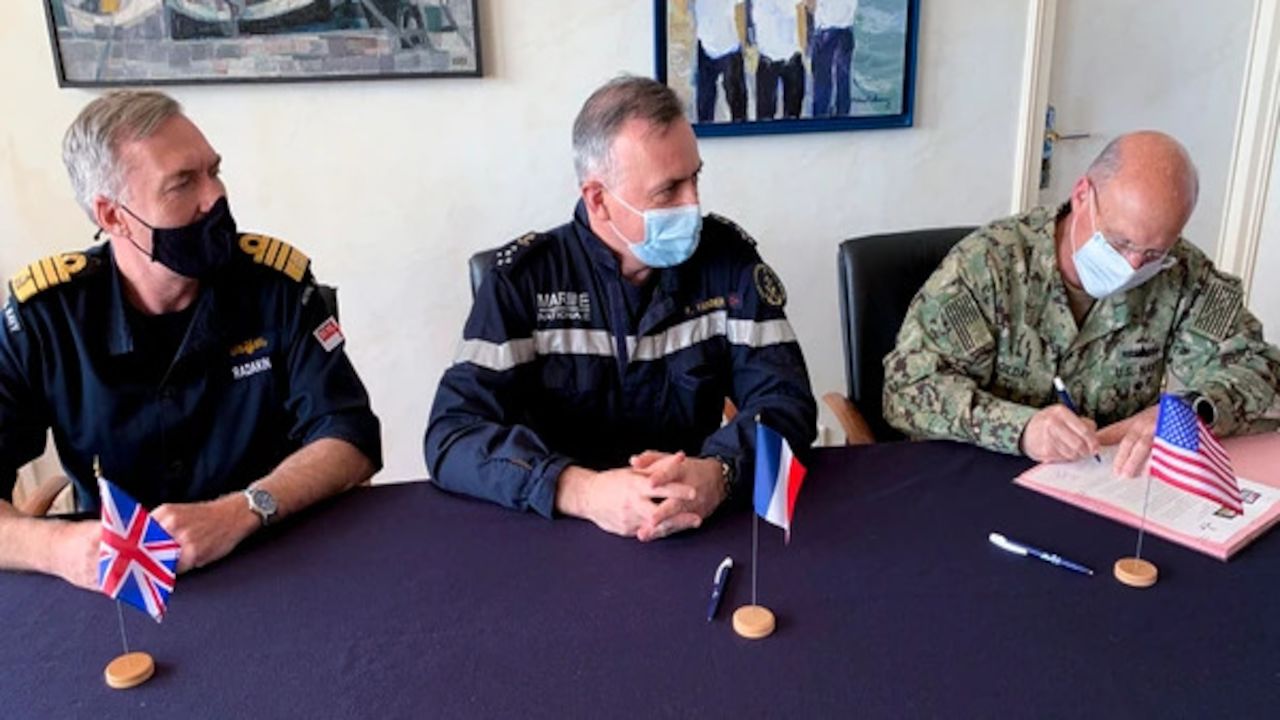 The chiefs of the U.S., U.K. and French navies met in France on Thursday to affirm their commitment to deeper collaboration and interoperability between their fleets to address some of the most vexing maritime security issues around the globe.

“No one nation can shoulder this burden alone. Our naval power is amplified by sailing and integrating with like-minded navies. Together, we strive to combat the challenges posed by an increasingly uncertain world. Even during the global pandemic we increased interoperability through exercises in the Indian Ocean enhancing maritime domain awareness, through continued operations across the spectrum of naval functions in support of NATO, and most recently through a carrier operations exercise which concluded today,” read the agreement, referring to an exercise between the British aircraft carrier Queen Elizabeth and the French aircraft carrier Charles de Gaulle.

“We will continue to strengthen our enduring partnership to ensure we prevail across the continuum of day-to-day competition, crisis, and conflict to keep the world’s oceans open and free. We must continue operating together to expand the reach and capability of our naval forces across the globe,” the document added.

As the three leaders signed the agreement in Toulon, the Queen Elizabeth — carrying a squadron of U.S. Marine Corps F-35B Joint Strike Fighters as part of the carrier air wing for its maiden deployment — and the Charles de Gaulle were holding a joint exercise in the Atlantic Ocean in a demonstration of what this trilateral collaboration could look like.

“We are three NATO navies, we are three nuclear navies and we are three aircraft carrier navies. And the fact that we can operate together, the fact that we have the same shared interests and values, is part of our strength,” Radakin told reporters after signing the agreement, according to a recording provided to Defense News. “The level of cooperation and coordination that exists between our three navies means that we can do so much more — so whether that’s that air and missile defense] exercise Formidable Shield against some of the most serious threats we face; we work in the Caribbean together to support our overseas territories and to also counter illicit drugs; we work together in NATO the whole time, supporting our submarines so that they have freedom of maneuver to operate in the North Atlantic; and then you’re seeing that in the Mediterranean today, and then you’re seeing it further afield in the Indo-Pacific, and you see it all the time in the Arabian Gulf.”

Common hardware among the allies has led to several exchanges in recent years that not only promote interoperability but move toward the notion of “interchangeability” that the naval leaders are seeking.

To ensure their forces remain interoperable and even interchangeable, the annual trilateral meeting between the naval chiefs is supplemented by a series of war games. In 2019, the U.S. Navy led an anti-submarine warfare-focused event. In 2020, the Royal Navy hosted one focused on multicarrier operations. This year, France is hosting the war game, though the topic has not yet been announced.

The allies are also seeking to collaborate more on technology development, with the U.S. and U.K. last year signing “a future integrated war-fighting statement of intent that sets a cooperative vision for interchangeability,” Gilday announced at the virtual Atlantic Future Forum in October.

“We will synchronize pioneering capabilities, strengthen operating concepts and focus our collective efforts to deliver combined sea power together. By organizing our cooperation on carrier strike, underwater superiority, navy and marine integration and doubling down on future war fighting like unmanned and artificial intelligence, we will remain on the leading edge of great power competition,” he said at the time.

To support that technology development cooperation, the U.S. Navy launched in London its first international “Tech Bridge” — an organization meant to connect innovators in industry and academia with leaders in the Navy.

“We’re going to establish our first-ever overseas Tech Bridge there in London. It will be a place for two-way sharing of ideas. And it’s not just government to government; it’s with industry, it’s with academia. Quite frankly, it’s with everyday citizens who may have an idea,” former Navy acquisition chief James Geurts, who currently serves as acting undersecretary of the Navy, said at the same event. “And the power of these tech bridges is they’re not on bases, they’re not behind barbed wire, they’re not just only a requirements pull. It’s a way that we can get idea push and accelerate that.”

Radakin spoke alongside Geurts and said the U.K. has several research and development programs he hopes to share with the U.S. as part the focus on unmanned, artificial intelligence and cyber technologies. He specifically highlighted an extra-large underwater drone being built in Plymouth that he believes could benefit both navies. He also cited the Maritime Autonomous Platform Exploitation program for controlling drones and allowing them to communicate with one another.

“Where we think that that technology and some of the success we’ve had might be of interest to the U.S. These are the things we’re sharing,” the admiral said.