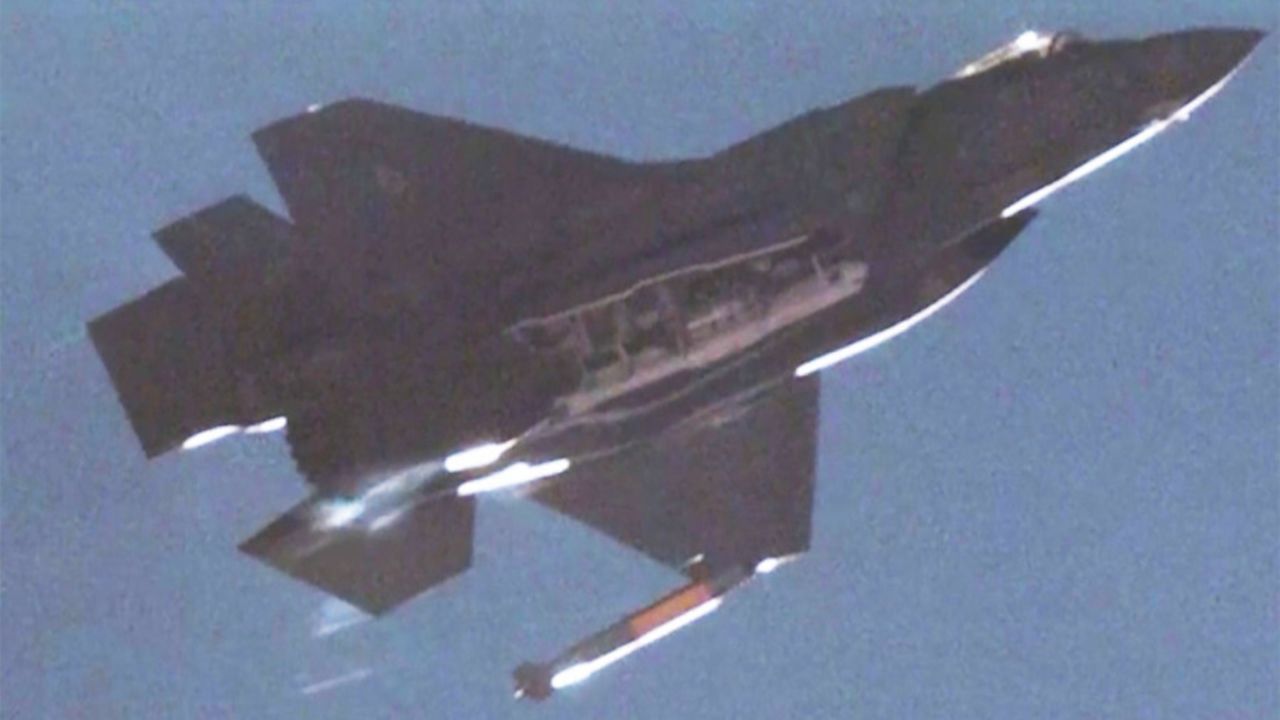 Sandia National Laboratories, in cooperation with the Los Alamos National Laboratory and the U.S. Air Force, recently completed a round of flight tests as part of the integration of the new B61-12 nuclear gravity bomb onto the F-35A Joint Strike Fighter. Sandia has also released first-of-its-kind video footage of one of these test sorties, which involved the first-ever release of an inert version of this weapon from an internal bomb bay on a plane flying faster than the speed of sound and that also provides an unprecedented look at the bomb's rocket spin stabilization system.

The press release from Sandia said that the supersonic test had taken place over the Tonopah Test Range on Aug. 25. The range is a secretive site nestled in the northwestern end of the sprawling Nevada Test and Training Range and it has been used for various kinds of nuclear weapons testing, as well as other sensitive research and development and test and evaluation activities, over the years. You can see a rare video tour montage of the range in this previous post of ours.

The F-35A dropped the test B61-12, which included functional non-nuclear components and simulated nuclear components, from an altitude of 10,500 feet. It took approximately 42 seconds for the bomb to hit the designated target on the range.

“We successfully executed this historic, first-ever F-35A flight test at Tonopah Test Range within the specified delivery criteria,” Brian Adkins, the range manager at the facility, said in a statement.

“This was the first test to exercise all systems, including mechanical, electrical, communication and release between the B61-12 and the F-35A,” Steven Samuels, a manager with Sandia’s B61-12 Systems Team, added. “The latest test is a critical piece in the F-35A and B61-12 program."

The test was particularly significant since the F-35A is expected to carry the B61-12 internally, unlike other so-called "dual-capable" combat jets able to fly at supersonic speeds, such as the F-15E Strike Eagle, which will also be able to employ this weapon. The Air Force's existing stealthy B-2 Spirit and the future B-21 Raider bombers will also carry these bombs internally, but fly at subsonic speeds.

The video from the test, seen earlier on in this piece, also gives a very good look at the function of the pair of angled rockets in the bomb's mid-section, which fire after it has been released to give it spin stabilization for greater accuracy. The B61-12 is also the first weapon in this family of nuclear bombs, which you can read about in more detail in this past War Zone feature, to have a precision-guidance system in the form of a tail kit that contains a GPS-assisted inertial navigation system (INS), similar in some general respects to the ones used on conventional Joint Direct Attack Munition (JDAM) bombs.

There have been other flight tests involving inert B61-12s loaded on F-35As since as least 2019. The F-35 Joint Program Office (JPO) released photos of some of those initial flight tests in June, before they pulled them offline.

The goal is for the full flight test series involving the F-35A to also "conclude with full-weapon systems demonstrations designed to increase confidence the bomb will always work when needed and never under any other circumstances." It's not clear when this test program might finally wrap up, but back in 2017, reports had said that the goal was to have the B61-12 integrated onto the F-35A by the end of this year. The Air Force declined to provide an updated timeline to The War Zone in response to a query earlier this year, citing "operational security reasons." Especially given the ongoing COVID-19 pandemic, it seems unlikely now that the Air Force's Joint Strike fighters will be certified to carry this weapon before sometime next year, at the earliest.

In March, Sandia had also announced that it had demonstrated that the B61-12 was fully-compatible with the F-15E Strike Eagle. It says it did the same with regards to the B-2 Spirit stealth bomber in June. It's unclear if the Air Force's nuclear-capable B-52 bombers will ever be certified to carry this weapon. These aircraft presently are not approved to carry any nuclear gravity bombs, owing to their vulnerability to increasingly more capable air defenses, and look set to only carry nuclear-tipped cruise missiles in the immediate future.