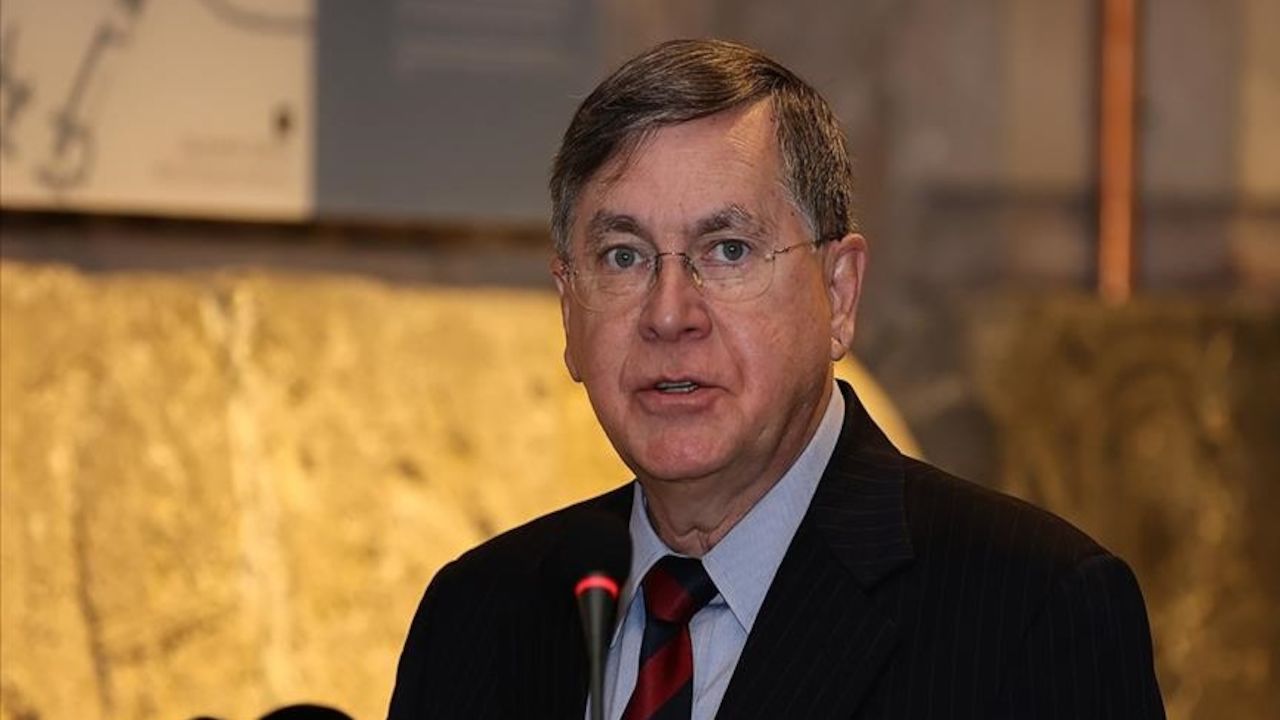 The US ambassador to Turkey said on Friday that they hope the S-400 issue between Turkey and the US can be resolved.

"We hope that the issue of S-400 can be resolved. But if it cannot be, we will continue to focus on all the areas of our cooperation that are not directly affected by the sanctions which we put into place," David Satterfield told reporters, evaluating Turkey-US relations.

The US administration imposed sanctions "very precisely", he said, noting: "We did not aim at affecting the Turkish defense sector as a whole, but rather specific licenses to SSP. We were compelled to take this step with regret."

He added: "There is no study group, working group, nor will there be. This is an issue of the execution of US statute and US law."

On Dec. 14, the US imposed sanctions on Turkey over the acquisition of the Russian S-400 missile defense system.

US officials have voiced opposition to the deal, claiming the S-400s would be incompatible with NATO systems and expose F-35 jets to possible Russian subterfuge.

Turkey, however, stressed that the S-400s would not be integrated into NATO systems, and pose no threat to the alliance or its armaments.

Stressing the significance they attach to relations in all dimensions with Turkey, including trade and economy, Satterfield said Turkey is an important and valuable strategic partner of the US and a NATO ally.

'We have always been confident in fundamental strengths of Turkish economy'

The US has over $30 billion of investment in Turkey, while the volume of bilateral trade exceeds $20 billion, Satterfield noted, saying there are also 1,700 US companies doing business in Turkey.

Recalling the "aspirational goal" of $100 billion bilateral trade volume, he noted that although this is "a very ambitious target, given the current level of $20 billion", they will continue to do anything to promote Turkish business in the United States.

"We've seen real progress in return of foreign direct investment to Turkey over the last few months, that's encouraging. Stabilization of the value of the Turkish] lira has also been encouraging. These are positive directions, we have always been confident in the fundamental strengths of the Turkish economy," Satterfield stressed.

Touching on the 61st round of the exploratory talks between Turkey and Greece held in Istanbul, he said the US welcomes the re-engagement of the meetings and looks to the next round planned to take place in the Greek capital Athens.

"This is a very positive development, and it has the strongest possible support of the United States and I think broadly, Europe and the international community. We'd like to see these talks continue, we would like to see a continued effort by both states to refrain from unilateral actions which generate distrust, and can produce the potential of escalation or confrontation," Satterfield noted.

The US acknowledges and appreciates measures that Turkey has taken to build such an atmosphere as well as efforts undertaken by Greece, he said, adding that these kinds of issues are "tough, long-standing, and complex issues" as maritime questions.

"But with good faith, with sustained effort and commitment, they are issues that ultimately can arrive at a resolution. We've seen that happen in other, even more complex, even more difficult situations," he added.

'We are very supportive of UN-led Libyan Political Dialogue Forum'

Recalling the first in a series of votes on the election of Libya's interim president and prime minister, the US ambassador said: "We are very supportive of the UN-led Libyan Political Dialogue Forum".

"It's in the interest of everyone to support this UN process, to see stability restored in a political context to Libya and to see preparations made for the ultimate goal of elections at the end of the year and withdrawal of all foreign forces from that troubled country," he noted.

Mohammad Younes Menfi on Friday was elected the president of Libya's interim government, and Abdul Hamid Mohammed Dbeibah the prime minister in the Presidency Council during voting in an unnamed location in Switzerland not far from Geneva.

Libya has been torn by civil war since the ouster of late ruler Muammar Gaddafi in 2011.

Based in the capital Tripoli and currently led by Prime Minister Fayez al-Sarraj, the Government of National Accord –  the country's legitimate government – was founded in 2015 under a UN-led agreement.

Despite the cease-fire deal, it has documented regular breaches by militias affiliated with warlord Khalifa Haftar.

International efforts for a permanent political settlement, however, are still underway.

The Biden administration will be formulating its policy approaches on a number of international issues of interest to Turkey, Satterfield said, recalling President Joe Biden's reaffirming the strong support of his administration for transatlantic relations for NATO.

"For the US relationship with Europe, the idea of EU, the European Union, we strongly encourage and this is not new, the closest of ties between Turkey and the EU. That's in the EU interests and it's in Turkey's interest, and it's in the United States interest," the US envoy stressed, adding that they will continue to be helpful in this regard.

On Iran, he said the new US administration will also be formulating an approach to this "extremely complex challenge" for the global community.

"Continued concern over radical extremism, Syria, Iran, elsewhere around the region and the world, all of these are going to be issues which the United States will be taking on a final note," he added.

"We are concerned about] comments by senior Turkish officials, which would hold the US accountable for a series of developments in Turkey, including the 2016 coup attempt]," he said, referring to Turkish Interior Minister Suleyman Soylu's statement holding the US responsible for the 2016 defeated coup.

Recalling US State Department spokesperson Ned Price's remarks in this regard, Satterfield said: "These are baseless allegations. They're not responsible statements from an ally and a strategic partner. And we regret them."

FETO and its US-based leader Fetullah Gulen orchestrated the defeated coup of July 15, 2016, in which 251 people were martyred and nearly 2,200 injured.

Turkey accuses FETO of a long-running campaign to overthrow the state through the infiltration of Turkish institutions, particularly the military, police, and judiciary.

He also said they regret statements with respect to the LGBTQI, whether those statements are made here in Turkey or elsewhere around the world.

Touching on Turkey's state lender Halkbank case, he said it is "not a matter for the US administration", adding: "The matter of the judicial proceedings in the Southern District of New York with respect to Halkbank case lies exclusively in the whelm of US courts."

'We continue to work with SDF'

Mentioning that his country's position regarding the SDF – the Syrian offshoot of the YPG/PKK terror group –  has not changed, Satterfield noted that they will continue to work with the SDF in northeast Syria.

In its more than 30-year terror campaign against Turkey, the PKK –  listed as a terrorist organization by Turkey, the US, and EU –  has been responsible for the deaths of nearly 40,000 people, including women, children, and infants. The YPG is the PKK's Syrian offshoot, and in 2017, the terror group sought to re-brand itself as the so-called SDF.