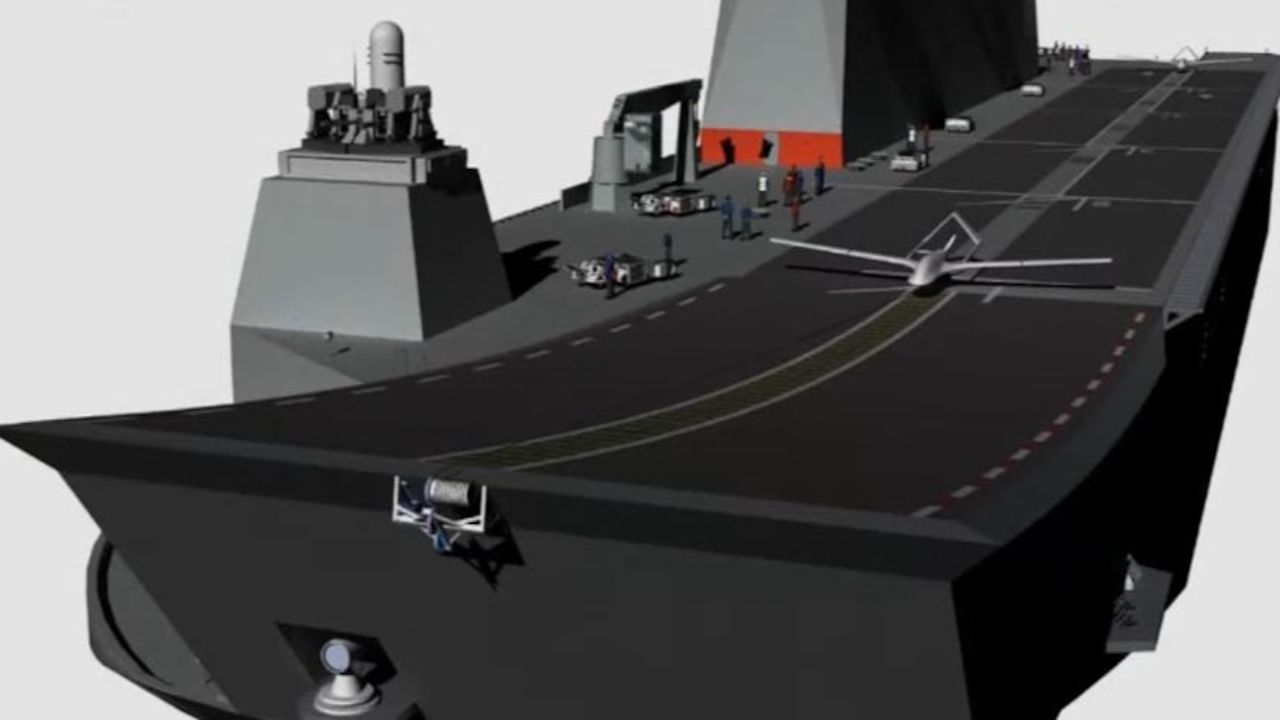 Turkish industry appears to have figured out an effective way of launching fixed-wing drones from ships.

The brute-simple method, which combines a winch-and-pulley system with a bow ramp, could help the Turkish navy transform its new assault ship Anadolu into the world’s first true drone aircraft carrier.

The arrangement also should allow for Anadolu to embark and launch manned planes, although it’s unlikely Turkey can develop a carrier plane that can take off from Anadolu’s 761-foot deck while also carrying a useful load of fuel and weapons.

A winch and pulley are visible on the vessel’s centerline. The cable runs along the bow ramp to a spot on the deck where the TB-2/3 is ready to launch. The winch presumably would drag the drone across the deck and up the ramp.

That, combined with the thrust of the 21-foot-long TB-2/3’s 100-horsepower engine, could get the propeller-driven drone airborne with most or all of its 300-pound payload.

The launch system is elegant in its simplicity. While it clearly has limitations, it could help the Turkish navy become the world’s first operator of an aviation ship with a majority drone air wing. The winch-and-ramp combo might not be able to launch drones much heavier than a TB-2/3 unless the drone itself packs more horsepower.

But one clear advantage of the system is that it doesn’t obstruct the deck like some alternative drone-launch gear might do. Navies have been launching fixed-wing reconnaissance and target drones from carriers and other big-deck ships since at least the 1960s. But those unmanned aerial vehicles usually took off by firing rocket boosters while cradled in a gantry.

The U.S. Navy in the 1960s came close to integrating rocket-boosted, jet-powered Model 147 reconnaissance drones aboard its carriers. But combat trials aboard the USS Ranger off of Vietnam in 1969 and ‘70 were disappointing to drone advocates.

Space was limited and the gantry was bulky. The Model 147 crew had to deploy a drone after Ranger launched a strike package then recover the drone before the package returned, leaving no room for error.

The Navy gave up on adding drones into its carrier wings. It wasn’t until more than 40 years later that the service came back to the idea. But the U.S. fleet, in contrast to the Turkish fleet, plans to launch its new carrier-compatible MQ-25 tanker drones via the same steam catapults that launch manned planes.

Anadolu, like most of the world’s aviation ships, lacks catapults. A winch-and-ramp launch method is an expedient—one that’s necessary only because Turkey got itself kicked out of the U.S.-led Joint Strike Fighter program, which was supposed to supply Ankara’s fleet with F-35B stealth jump jets that Lockheed Martin LMT -1.8% designed specifically to fly from ships like Anadolu.

With just a few modifications, Anadolu could embark a useful air wing made up of TB-2/3 drones and helicopters. Yes, the vessel would lack an embarked air-to-air fighter. But the TB-2/3 drone with its sophisticated sensors, long loiter time and small, precise munitions is a proven surveillance and strike platform.

During the brief, bloody war between Armenia and Azerbaijan last fall, Azerbaijan’s TB-2s and other drones destroyed hundreds of Armenian tanks, fighting vehicles, artillery pieces and air-defense systems. Imagine the same kind of robotic air campaign, but projecting from a mobile platform at sea.

Turkish industry has considered developing a light manned fighter that might also be compatible with Anadolu. But if China and Russia’s own experiences with ramp-launched manned fighters is any indication, the Turkish jet might suffer crippling performance limitations while operating from a short carrier lacking catapults.

Drones—and a simple method for launching them—probably are the way to go. Anadolu is in the final stages of construction and could join the fleet in 2022.