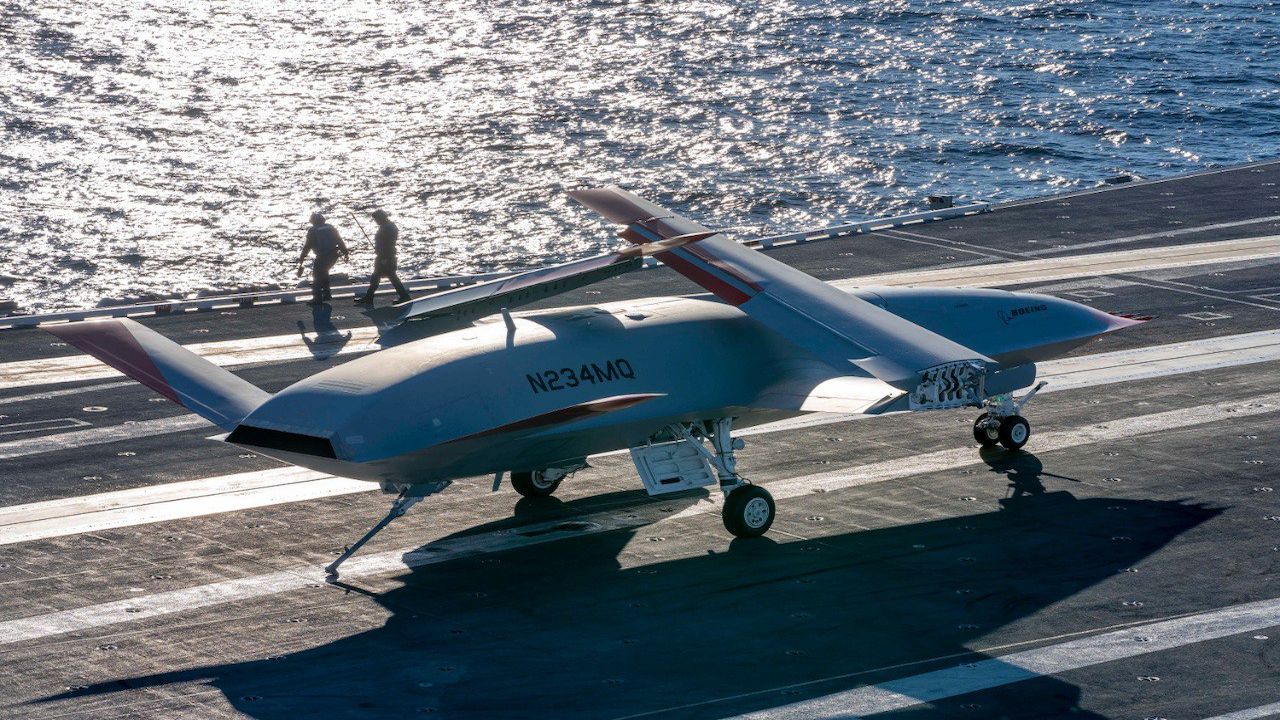 Boeing announced Monday, that together with the U.S. Navy they have successfully maneuvered the Boeing-owned T1 test asset on a U.S. Navy aircraft carrier for the first time – an early step forward in ensuring the MQ-25 unmanned aerial refueler will seamlessly integrate into carrier operations.

During an underway demonstration aboard the USS George H.W. Bush (CVN 77), Navy flight deck directors – known as “yellow shirts” – used standard hand signals to direct T1 just like any other carrier-based aircraft. Instead of a pilot receiving the commands, however, it was a Boeing MQ-25 Deck Handling Operator (DHO) right beside the “yellow shirt” who commanded the aircraft using a new handheld deck control device.

“This is another significant step forward in demonstrating MQ-25’s integration into the Carrier Air Wing on the flight deck of our Fleet’s aircraft carriers,” said Capt. Chad Reed, Unmanned Carrier Aviation program manager. “The success of this event is a testament to the hard work of our engineers, testers, operators and the close collaboration and teaming from Naval Air Force Atlantic and the crew aboard CVN 77.”

The demonstration was intended to ensure the design of the MQ-25 will successfully integrate into the carrier environment and to evaluate the functionality, capability and handling qualities of the deck handling system both in day and night conditions. Maneuvers included taxiing on the deck, connecting to the catapult, clearing the landing area and parking on the deck.

“The Navy has a rigorous, well-established process for moving aircraft on the carrier. Our goal was to ensure the MQ-25 fits into the process without changing it,” said Jim Young, MQ-25 chief engineer. “From the design of the aircraft to the design of the system moving it, our team has worked hard to make the MQ-25 carrier suitable in every way.”

DHO’s trained in Boeing’s deck handling simulation lab in St. Louis, where they practiced entering commands from simulated “yellow shirts” into the real handheld device. A simulated MQ-25, running the aircraft’s real operational flight code and interfaces, would move accordingly. The handheld controller is a simple, easy-to-use device designed specifically for a generation of sailors who natively understand such handheld technology and have experience with controllers used in the gaming industry today.

The deck handling demonstration followed a two-year flight test campaign for the Boeing-owned T1 test asset, during which the Boeing and Navy team refueled three different carrier-based aircraft – an F/A-18 Super Hornet, an E-2D Hawkeye and an F-35C Lightning II.

“The Navy gave us two key performance parameters for the program – aerial refueling and integration onto the carrier deck,” said Dave Bujold, Boeing MQ-25 program director. “We’ve shown that the MQ-25 can meet both requirements, and we’ve done it years earlier than traditional acquisition programs.”