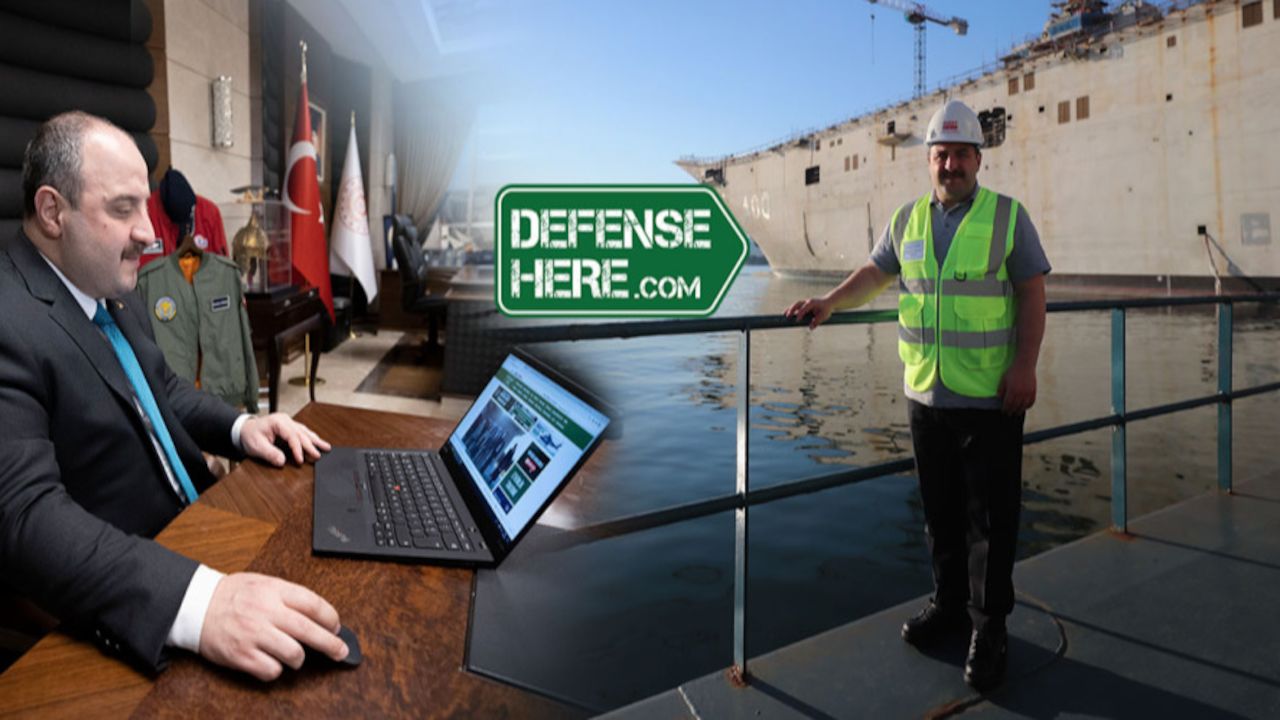 As a sequel to the first part of the interview Defensehere.com had with the Turkish Minister of Industry and Technology, Mr. Mustafa Varank, we are the releasing the second part of the interview, where Mr. Varank made important statements about the cooperation between public and private sector in Turkish defense industry.

The Minister of Industry and Technology, Mustafa Varank: In fact, we can say that science and technology policies are a product of the Second World War, and actually military needs are the basis of many technologies we use today. Computers, the Internet, and radars are products we primarily needed for defense purposes, and then these technologies spread to other aspects of our lives.

I can say that the sector of defense industries is the most successful establishing partnerships between the public and private sectors as well as universities, where stakeholders exchange information, conduct commercial activities and support investments. This exchange also paves the way for cooperation and progress with other sectors.

The National Intensive Care Ventilator is one of the best examples of this cooperation, and we have moved to the stage of mass production of these devices within only 14 days.

In fact, we had the capacity for the production of this device thanks to the infrastructure of Biosys Inc., yet there was a need for cooperation for further improvements. In this context our defense industry companies such as Aselsan and Baykar took immediate action.

Turkish industrialists are very successful in adapting to new conditions and taking quick action. They demonstrated this not only in the case of respiratory devices, but also with their ability to adapt to changing consumer demands throughout the period of the pandemic.

The defense industry also has a great impact on Turkey’s domestic car development project. Right now, each of these might seem as insignificant as a butterfly's flapping wings, but I believe they will turn into a hurricane in the near future.

Defensehere.com: Why is it important to ensure tighter cooperation and coordination between actors/companies in the field of defense industries? What are the steps taken in this regard?

The Minister of Industry and Technology, Mustafa Varank: Rapid changes in technology make it increasingly difficult for businesses to survive. Of course, these difficulties force businesses to develop new approaches. Under extremely competitive conditions, I think collaboration is the key to success. The effectiveness of resources increases with digital transformation, and companies work with less capital and less labor, which reduces costs. In such a world, the way to competitiveness is through closer cooperation.

In this respect, the organized industrial zones shoulder a lot in the field of technology. We encourage cooperation between companies located in these industrial zones. On the other hand, the existence of technology development zones in which technology is developed and researched, within universities, facilitates access to information. Again, our research centers serve all of our businesses with their common infrastructures.

In particular, we create industrial and technological zones for the development of cooperation between companies, and the Kırıkkale Arms Industrial Zone project was established to serve this purpose. We completed the infrastructure construction of this project by the end of 2017 and put it into the service of our industrialists. We provided approximately 30 million liras in the form of loans for this project. We have also completed the establishment of Ankara Aerospace Industrial Zone, which will make a great contribution to our country in the fields of defense and aerospace. In addition, we have also established the Konya Technological Industrial Zone that will serve the defense and aerospace sectors where it will all types of industry products will be manufactured and produced. When this zone is fully operational, we aim to father invest 700 million dollars in it and employ 4000 people.

In Teknopark Istanbul, which we established in 2010, there are more than 300 companies, including defense industry companies such as STM, Aselsan, TAI, TEI, Roketsan and BMC, which carry out R&D projects. There are more than 90 entrepreneurs and entrepreneur groups that carry out R&D studies in this incubation center. Teknopark Istanbul also houses a Technology Transfer Office which works on getting patents for the projects where the R&D work is carried out as well as commercializing these projects. On the other hand, SAHA Istanbul (Istanbul Defence and Aerospace Cluster Association) carries out an important role in creating a synergy between organizations working in the field defense industries.

In TÜBİTAK Defense Industries and Space Technologies Research and Development Institutes as well as   TÜBİTAK Informatics and information security, and Marmara research centers, unified goals have been identified between the defense industry companies in line with Turkey’s national interests. This synergy contributes greatly to localization.

Once more, our Order Based R&D Support Program also serves cooperation, where SMEs are supported by both large companies and TÜBİTAK to meet the needs of large companies. In our first call, we received applications above expectations and the evaluation process of 14 applications from the defense industry is progress.

The first part of the interview: Exclusive Interview with the Turkish Minister of Industry and Technology Mustafa Varank (Part 1: CAATSA sanctions)