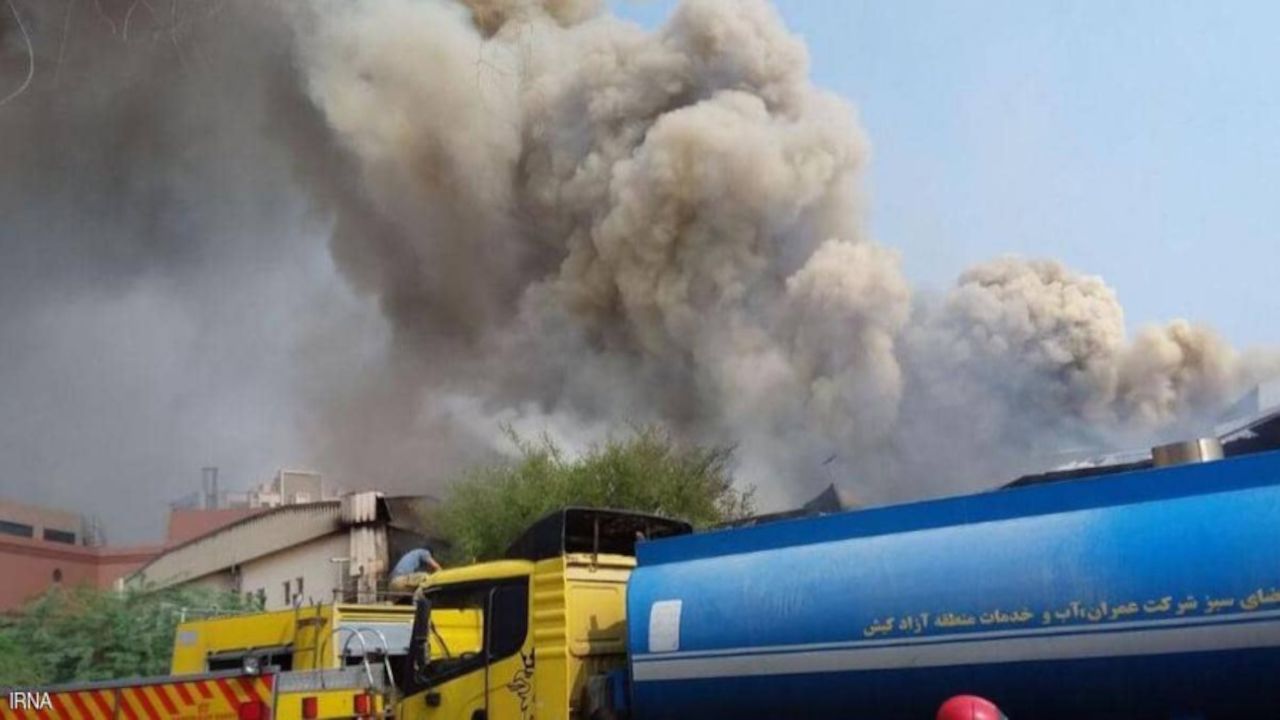 Iran has provided no information about cause of explosion in Isfahan that injured at least nine workers.

A complex that houses a factory that makes Iranian drones has suffered a major explosion days after Israel had claimed that Iran was providing drones to Hamas in Gaza.

The blast at the weekend injured at least nine workers at the petrochemical factory in Isfahan. The Iran Aircraft Manufacturing Industrial Company (Hesa), which produces a variety of aircraft and drones for Iranian and pro-Iranian forces, is located in the complex owned by Sepahan Nargostar Chemical Industries.

There was no independent confirmation of the cause of the explosion or the precise factory hit.

Iran has not provided information on the cause of the incident, but Israel has shown no compunction in the past about taking what it regards as reprisals inside Iran.

The Israeli prime minister, Benjamin Netanyahu, on Thursday showed the remains of what he described as an Iranian drone that was downed on Tuesday after crossing from Iraqi or Syrian airspace.

The extension is critical to give negotiators in Vienna time to complete talks on reviving the wider nuclear deal between the US and Iran. There were reports that the inspector’s technical agreement would be extended for a month, but this was contradicted by Iranian hardliners.

The head of the UN nuclear inspectorate, Gen Rafael Grossi, delayed a press conference on Sunday where he was due to unveil the extension, suggesting that problems remain with conditions being attached by Iran.

A previous three-month deal expired at the weekend and without an extension the wider talks designed to bring the US back into the nuclear deal would either be suspended indefinitely or ended.

The extension would be highly controversial inside Iran with hardliners battling to win the Iranian presidency in next month’s election and determined to display resistance to any compromise with the US.

Commenting on the state of the Vienna talks Anthony Blinken, the US Secretary of State, said Washington has not seen yet whether Iran will do what it needs to do to come into compliance with its nuclear commitments in order to have sanctions lifted.

“Iran, I think, knows what it needs to do to come back into compliance on the nuclear side, and what we haven’t yet seen is whether Iran is ready and willing to make a decision to do what it has to do. That’s the test and we don’t yet have an answer,” he told ABC.

Iran has been steadily reducing its compliance with the nuclear deal, saying its steps were justified as a response to the US pulling out of the 2015 deal altogether in 2018.

A one-month extension would give the US, Iran and the five other signatories to the deal leeway to try to complete an agreement on how US will lift sanctions against Iran and return to the deal, in turn restoring Iran’s full compliance with the agreement. The talks are set to enter what is expected to be their fifth and decisive round this week, with both sides warning that big gaps still remained.

If there is no extension, Iran said it could delete the video recordings of its sites compiled over the last three months, leaving the IAEA without information on Iran’s nuclear sites.

In a sign of the tensions in Iran over the extension, Mohammad Baqer Qalibaf, speaker of the parliament and a hardliner, said: “From 22 May and with the end of the three-month agreement, the agency will have no access to data collected by cameras inside the nuclear facilities agreed under the agreement.”

He gave the impression that an irrevocable decision had been made on Saturday and was backed by the supreme leader, Ayatollah Ali Khamenei. “Yesterday it was discussed and the decision was made,” Qalibaf said. “The law passed by the parliament will be implemented. The supreme leader has underlined the importance of implementing the law as well.”

But other unnamed officials said Iran was prepared for a conditional one-month extension.

The outgoing president, Hassan Rouhani, personally invested in the strategic decision to sign the nuclear deal, said the Vienna talks were going well, and claimed the US has agreed to lift a panoply of sanctions.

The Russian ambassador to the Vienna talks, Mikhail Ulyanov, said “If this news] is true, it is a positive and necessary step.”

Iranian lawmakers in December overwhelmingly voted in favour of tasking the Iranian Atomic Energy Organisation of Iran (AEOI) to produce and store at least 120 kilograms of enriched uranium with a 20% purity level every year and raise enrichment beyond 20%, according to the country’s needs. All these stipulations breach Iran’s obligations under the nuclear deal.