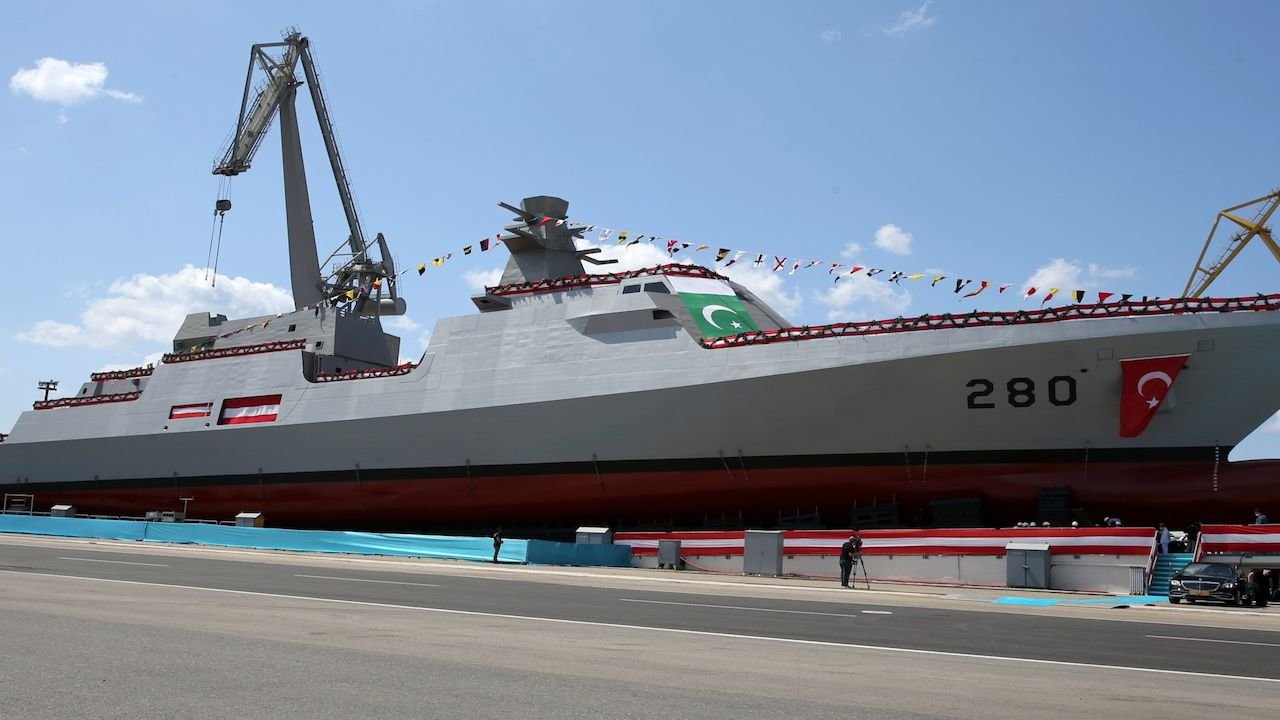 The first corvette ship built in Turkey for the Pakistan Navy was launched Sunday from a shipyard in Istanbul.

The MILGEM-class corvette, named PNS Babur, was launched in a ceremony attended by President Recep Tayyip Erdoğan and his Pakistani counterpart Arif Alvi.

“We are in agreement (with Pakistan) to further our partnership in the defense industry,” Erdoğan said, addressing the ceremony.

The deliveries of all the corvettes for which Turkey and Pakistan signed a deal in 2018 will be completed by 2025, the president noted.

The MILGEM (National Ship) marine platforms project is a Turkish warship program that aims to develop multipurpose corvettes and frigates that can be deployed in a range of missions, including reconnaissance, surveillance, early warning, anti-submarine warfare, surface-to-surface and surface-to-air warfare, and amphibious operations.

In July 2018, the Pakistan Navy signed a contract for the acquisition of four Ada class ships with Turkish state-owned defense firm ASFAT.

According to the plan, two corvettes were envisaged to be built in Turkey and the other two in Pakistan, in a deal that included technology transfer.

In addition to MILGEM corvettes, Erdoğan said there are very successful cooperation projects such as T129 tactical reconnaissance and attack helicopters (ATAK) and training aircraft.

“We want our strong political relations with Pakistan and our cooperation in the defense industry to be reflected in our trade relations,” the president noted, recalling that the two countries signed a road map in Islamabad in February last year to help them in this regard.

“Our institutions continue to work to implement this action plan,” he added.

“Pakistan plays a critical role in efforts to establish peace and increase prosperity in South Asia, an important region with a population of more than 2 billion people. Solutions to the problems facing the region can only be implemented with the support of Pakistan,” Erdoğan said.

The MILGEM corvettes will be fitted with the state-of-art surface, sub-surface and anti-air weapons and sensors, integrated through an advanced network central combat management system.

The vessels are on average 99 meters (325 feet) long with a displacement capacity of around 24,00 tons and can move at a speed of 29 nautical miles.

MILGEM anti-submarine combat frigates, which can be hidden from the radar, will further enhance the defense capability of the Pakistan Navy.

Turkey is one of only 10 countries in the world that can design, build and maintain warships using its national capabilities.

Erdoğan said Turkey has managed to reduce its foreign dependency in the defense industry from 80% to below 20%.

“Turkey is a country that shares every facility it gains with its friends and brothers, as it grows and becomes stronger,” he said.

“When the projects, all of which will be concluded in four to five years, are realized, Turkey will rise to the top league of the world in the field of the defense industry,” Erdoğan added.