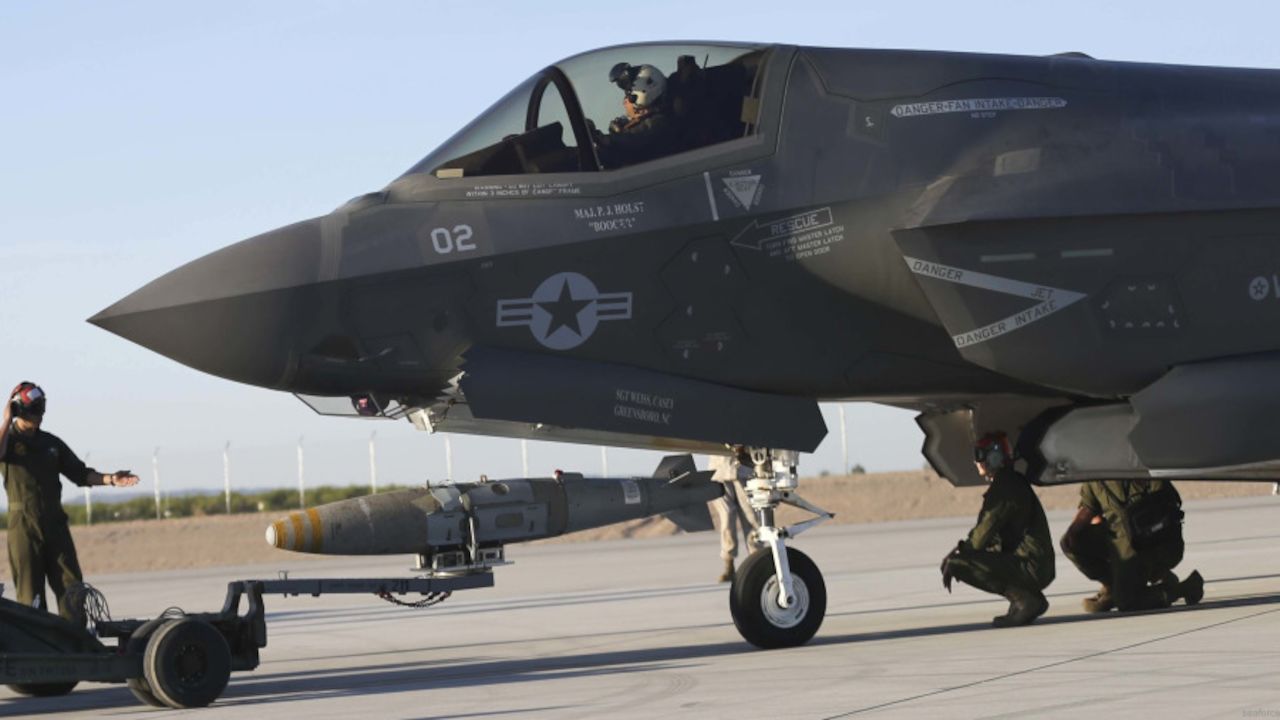 The Italian Air Force's F-35B jet made a short landing Tuesday on the Italian island of Pantelleria to join a British Royal Air Force F-35B. The two Joint Strike Fighters practiced fast ground refueling from a parked C-130J, marking the first time F-35Bs from Italy and the U.K. have trained together.

The British jet had flown in from the Royal Navy’s new aircraft carrier HMS Queen Elizabeth, which is steaming past the island on a flag-flying mission to the Asia-Pacific region.

The Italian F-35B arrived on Pantelleria, a tiny speck in the middle of the Mediterranean Sea, for the second time as it tests Italy’s plan to deploy the type to advance bases with very short runways.

After rolling off Italy’s F-35 final assembly line, the Air Force’s first and so far only “B” model was due to fly to the U.S. for pilot training in February 2020, but was stuck in Italy because of pandemic-related restrictions. According to officials, things have worked out just fine.

“Because of the pandemic ... it stayed in Italy, and in a year we have acquired notable experience, including on maintenance, qualifying technicians, and achieved a series of certifications allowing activities like today,” said Gen. Gianni Candotti, the Italian Air Force’s operational commander. “Partnering is absolutely important in Europe where we and the British use the F-35B, and we exploring additional] opportunities to exercise together.”

Joint training made sense since the two air forces were likely to join forces in operations, he added. “The aircraft we have — and this is also the case for our partners — are insufficient to mount daily sorties that NATO or other organizations require. It is necessary to pool forces with partners. In 30 years in the Air Force I have never worked alone. We have always worked with other allies that share objectives and values.”

Britain’s participation was enabled by the proximity of the Queen Elizabeth, which is also hosting 10 U.S. Marine Corp F-35s on its eastward trip. One of the American jets was due in Pantelleria on Tuesday, but its visit was canceled after a Marine F35B flying from the ship suffered a malfunction and was forced to land on the Spanish island of Ibiza.

Meanwhile, the Royal Air Force jet arriving on Pantelleria was joined by a Royal Navy Merlin helicopter carrying a British crew to assist with refueling. That drill on the island’s small Italian air base was part of a wider exercise currently taking place in Italy. Falcon Strike, which involves F-35As from the U.S., Israel and Italy, marks the first visit to Italy by Israeli F-35s. Italy currently operates 10 “A” models, with three more undertaking training in the United States.

Additionally, the Italian Navy has taken delivery of two F-35Bs, also training in the United States. And in March, the service qualified its aircraft carrier Cavour to host the fighter after sea trials with American jets.

But when it comes to joint training and operations, the fate of F-35Bs is in question: Both the Navy and Air Force are due to receive 15 of the jets — a small number amount, which could justify joint management. However, no decision has been made amid jockeying between the services to keep sovereign control over their respective jets, and it has yet to be decided who gets Italy’s fourth “B” model when it is delivered.

As a sign that some sort of integrated Italian F-35B force is in the works, a Defence Ministry document issued this year contained objectives for 2022, among them a “STOVL Joint Force,” using an acronym for short takeoff and vertical landing. That could involve Air Force F-35Bs flying off the Cavour, but Candotti said that “is not our immediate objective.”

Instead, the Air Force would focus on preparing to land its F-35Bs on short and rough runways, with Afghanistan serving as a lesson. “In Afghanistan, only after a year and lots of money spent and risks taken, we were able to lengthen the runway at the base used by Italians to use our Tornados,” he said, referring to another military aircraft.

However, he did not rule out some form of eventual joint command for Italy’s Navy and Air Force F-35Bs. “Everything is possible. Our British colleagues did it with the Harrier and continue with the F-35B. There are various ways to integrate from minimum collaboration to full integration. It is being studied.”