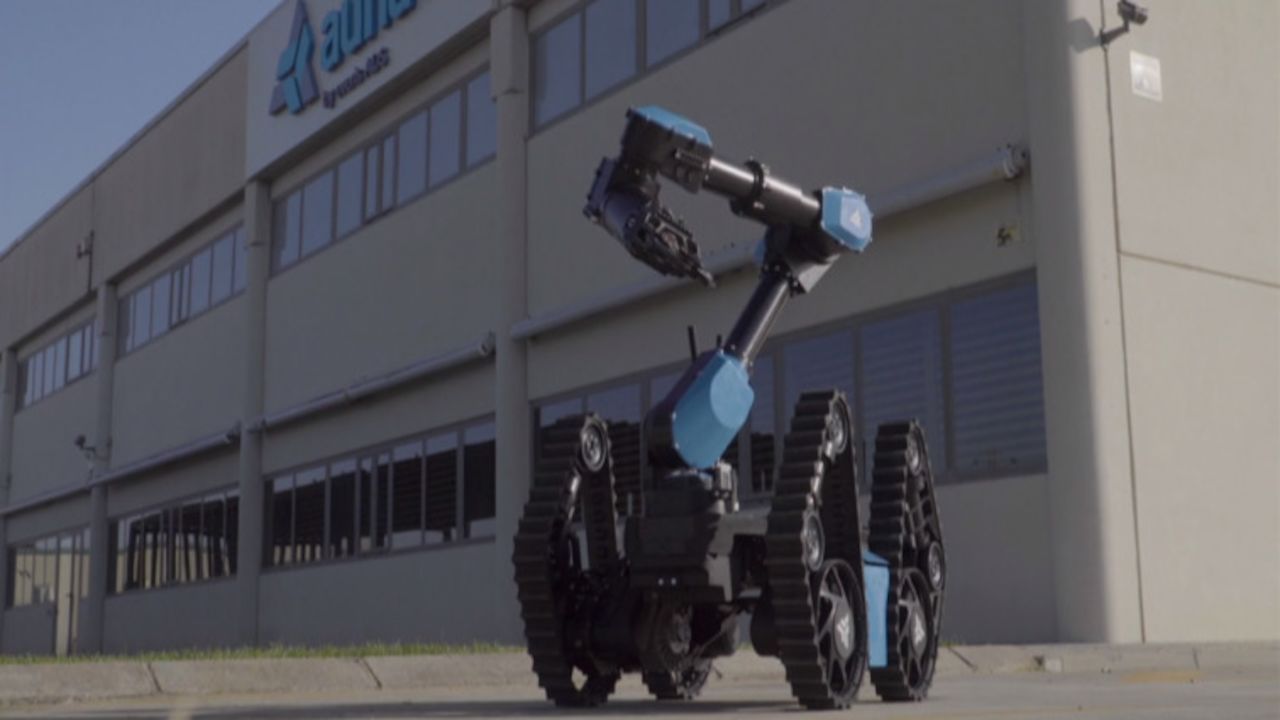 aunav, the benchmark in the development of robotic solutions for defence and security, launched its new robot today, the aunav.NEO, which is the only explosive disposal robot in the world equipped with a variable geometry system. This technology allows the robot to adjust its width during a mission to suit any environment at any time and in any situation.

The robot, developed and manufactured at the aunav facilities in Huesca, arose to meet the needs of security and armed forces. It’s a versatile system capable of operating in different scenarios, most notably in areas that are difficult to access.

This makes the aunav.NEO uniquely prepared to neutralize improvised explosives, ammunition or CBRN threats (Chemical, Biological, Radiological, Nuclear) in tight spaces such as plane, bus or subway aisles or underground tunnels and naturally, it does very well on rough terrain open spaces alike.

One robot fits all

Pablo Vázquez, General Director of aunav, has proudly stated, “the engineering involved in this project, is added to 17 years of experience in the field of robotics for explosives deactivation, and gives us the edge and the knowledge to incorporate unique technologies in the sector. We can therefore truly say that because of its versatility, the aunav.NEO fuses several robots into one”.

He further added, “Maintaining the characteristically robust reliability of all our products, the aunav.NEO is also the lightest robot in our catalogue and incorporates state-of-the-art technology”. He also said, “the objective of aunav is to provide security and armed forces with cutting-edge solutions so that they can safely approach high-risk situations with the maximum guarantee of success.”

Leading technology to save lives

One of the aunav.NEO’s most remarkable innovations is its variable geometry system. The robot utilizes it to quickly and remotely increase or decrease its width, allowing it to operate in different scenarios within the same mission. It is further complemented by the platform’s self-stabilization technology, which always keeps it in a horizontal position in relation to the ground and is unaffected by stairs, ramps or uneven terrain. The aunav.NEO’s capabilities are boosted by an arm attachment that performs threat prevention and neutralization tasks with a superb combination of strength and precision.

Thanks to this fusion of technologies, the aunav.NEO can, for example, climb an airplane’s stairs, adjust its width to manoeuvre through the aisle, open the upper hand luggage compartment and pick up and remove a suspicious object that was lodged inside.

Another important innovation is that it is a demountable, modular robot. The arms, flippers and batteries can easily be detached, allowing the aunav.NEO to be transported in a wide range of vehicles, including the trunk of a car. No more than two people are needed to load and attach the parts easily, making it instantly operable.

Thanks to the use of Plug and Play technology, the aunav.NEO allows easy incorporation and exchange of different accessories (such as cameras) onto different parts of the platform. This versatility, therefore, enables it to be configured according to the needs of each mission.

The aunav.NEO is controlled by the aunav’s exclusive Remote Control Unit (OCU). Noteworthy is the Autonomous navigation systems, for both indoors and outdoors, which generates 3D maps of the environment.