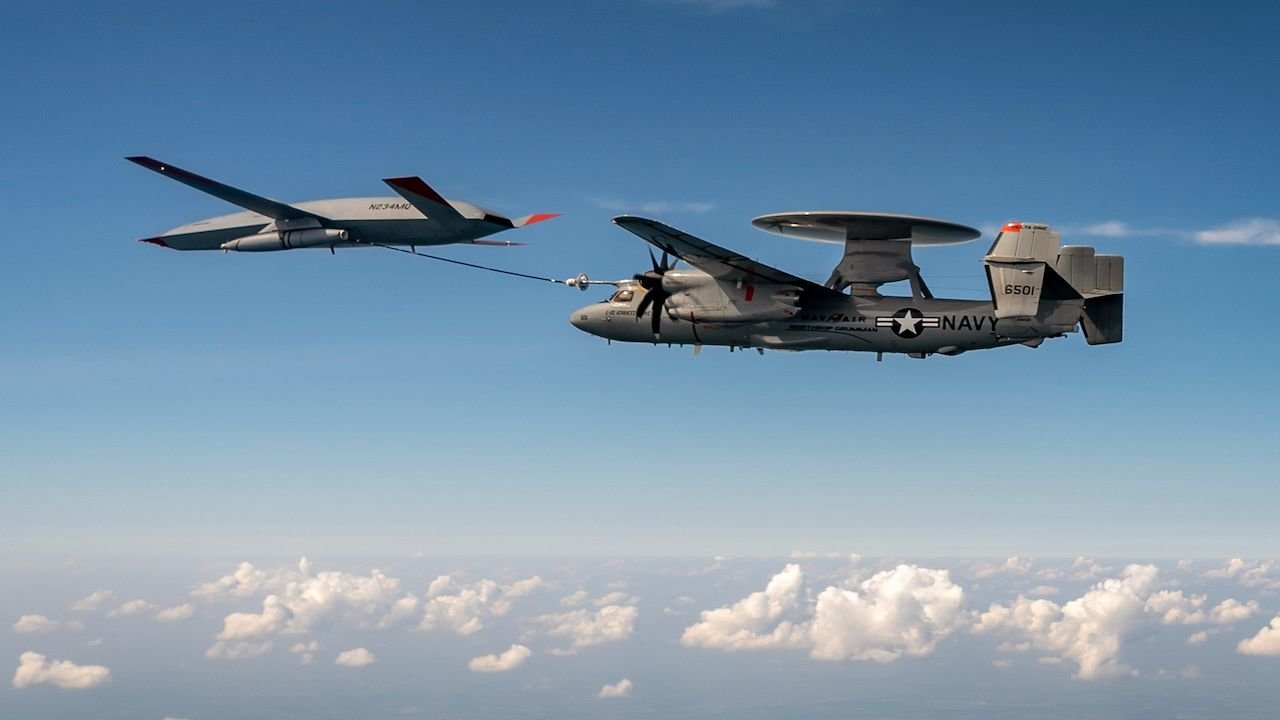 According to a press release by Boeing, the U.S. Navy has completed a second carrier-based aircraft unmanned refueling mission with the Boeing-owned MQ-25TM T1 test asset, this time refueling a Navy E-2D Hawkeye command and control aircraft.

During a test flight from MidAmerica St. Louis Airport on Aug. 18, pilots from the Navy’s Air Test and Evaluation Squadron VX-20 conducted a successful wake survey behind MQ-25 T1 to ensure performance and stability before making contact with T1’s aerial refueling drogue. The E-2D received fuel from T1’s aerial refueling store during the flight.

“Once operational the MQ-25 will refuel every receiver-capable platform, including E-2,” said Capt. Chad Reed, the Navy’s Unmanned Carrier Aviation program manager. “This flight keeps us on a fast track to getting the Stingray out to the fleet where its refueling capability will greatly increase the range and operational flexibility of the carrier air wing and strike group.”

The MQ-25 StingrayTM will be assigned to the carrier airborne early warning squadron within the carrier air wing, which currently operates the E-2 C/D aircraft – known as the “digital quarterback” of the fleet for its role in joint battle management and command and control.

“It was another great flight showing that our MQ-25 design is performing to plan,” said Dave Bujold, Boeing’s MQ-25 program director. “These historic refueling flights provide an incredible amount of data we feed back into the MQ-25 digital models to ensure the aircraft we’re producing will be the Navy’s game-changer for the carrier air wing.”

This is the second aerial refueling mission the MQ-25 team has conducted this summer. On June 4, the MQ-25 T1 test asset became the first unmanned aircraft to refuel another aircraft, a U.S. Navy Super Hornet. Both flights were conducted at operationally relevant speeds and altitudes, with the E-2D and F/A-18 performing maneuvers in close proximity to T1.

Boeing is currently manufacturing the first two of seven MQ-25 test aircraft and two ground test articles currently under contract. The Boeing-owned MQ-25 T1 test asset is a predecessor to these aircraft. The MQ-25 is leveraging advancements in model-based digital engineering and design, and ongoing flights are intended to test aircraft design and performance much earlier than traditional programs.

Boeing is the world’s largest aerospace company and leading provider of commercial airplanes, defense, space and security systems, and global services. As the top U.S. exporter, the company supports commercial and government customers in more than 150 countries and leverages the talents of a global supplier base. Building on a legacy of aerospace leadership, Boeing continues to lead in technology and innovation, deliver for its customers and invest in its people and future growth.