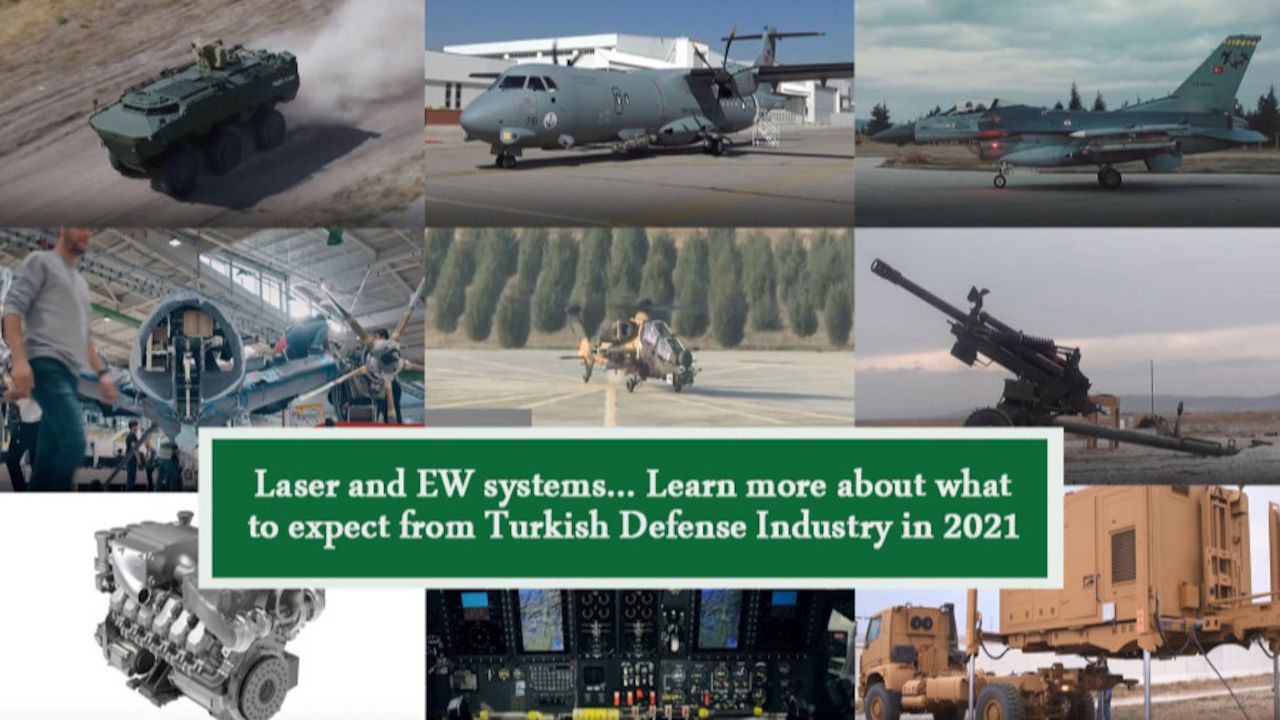 As the only media platform in Turkey that offers Defense Industry oriented content in four different languages, we as defensehere.com have produced and published the dubbed version of this video in 4 languages.

In the shared video came the following information:

• The First deliveries of the AKINCI Assault Unmanned Aerial Vehicles will be made.
• The Mass production of the AKSUNGUR Unmanned combat Aerial Vehicles will proceed.
• Projects will be implemented towards executing swarm system missions using Turkish-Made Mini, Tactical, Operative and Strategic class UAVs and UCAVs.
• The first deliveries of the more advanced version of the ATAK helicopter, the Phase-2 configuration, will be initiated.
• Structural improvements of the F-16s existing in Turkish inventory will proceed.
• Three maritime patrol and Utility aircrafts will be delivered within the framework of the MELTEM-3 Project.
• Two more C130 E / B transport aircrafts, with modernized avionics, will be delivered in the framework of the Erciyes Project.
• The design work and wind tunnel tests of the TF-X (MMU) aircraft will proceed. The design of subsystems will be initiated.

• Low Altitude Air Defense Missile System HİSAR-A + will enter inventory and first deliveries will be made.
• The tests of the Medium Altitude Air Defense Missile System HİSAR-O + will be concluded and it will be ready to enter inventory.
• As for the Long-Range Air and Missile Defense System-SIPER Project, the detailed design of the system and subsystem components will be completed in cooperation with ASELSAN-ROKETSAN-TÜBİTAK SAGE.
• The first deliveries of Turkey’s first anti-ship missile ATMACA will also take place.
• First deliveries of the domestic and locally developed Torpedo AKYA will begin.
• The first deliveries of the Single-Use Anti-Tank missile KARAOK Used by a Single Private Person will be made.
• Developed to guarantee the superiority of Turkish warplanes, test firings of the medium/long range BOZDOĞAN and GÖKDOĞAN air-to-air missiles from aircrafts will be conclude.
• Developed for the use on ground platforms, first deliveries of the nationally developed 7.62 mm Machine Guns (PMT 7.62) will take place.
• Deliveries of Gunpowder systems developed domestically with the aim of replacing their imported counterparts, will begin.
• The first modernized mortar guns will be delivered within the framework of a project initiated to increase the usage efficiency of mortar systems existing in the inventory.
• In support of the Turkish General Directorate of Security, a Laser Weapon System Project will be initiated for the first time.
• With the intent of reducing foreign dependency on explosives used in rockets and missiles, ROKETSAN will continue production processes at their Explosive Raw Material Production Facility.

• Prototype production of Heavy Class Unmanned Ground Vehicles (UGVs) will be realized.
• The first level-2 configurations of the mid-class UGVs will be delivered, while a contract will be signed for the Level-1 ones.
• The first of the in level-3 configurations the of Light Class UGVs are to be delivered.
• The first deliveries of the Pars 6x6 Mine-Resistant Vehicles, which are to be the first in the TAF inventory, will be realized.
• Contracts for Tank transporters, Wheeled Container Transporter and Wheeled Recovery Vehicle Projects will be signed.
Electronic Systems
• The KTJ3200 Turbojet Engines to be used in SOM and ATMACA missiles are to be delivered for the first time.
• Developed for the ALTAY Tank, the first prototype of the BATU tank engine will be ignited.
• The first prototype of the UTKU engine and transmission system developed for the New Generation Light Armored Vehicles will be run for the first time.
• First deliveries are to be initiated within the framework of the High Frequency Jamming System Project (HF ET - MILKAR-4A2).
• The first delivery of the nationally developed Early Warning Radar System (EIRS), which will meet the early warning capability needs of the Turkish air forces, will be realized.
• The first mass production Radar ET Systems will be delivered within the framework of the Radar Electronic Support/Electronic Attack Systems Project.
• The Mass production of the Turkish CATS camera system to be used with UAVs will proceed.

Laser and EW systems... Learn more about what to expect from Turkish Defense industry in 2021